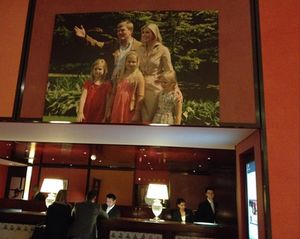 The Royal Family, above reception 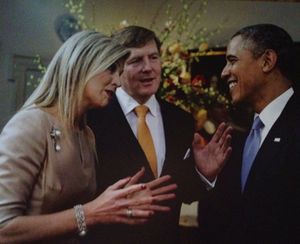 Saturday April 26th, 2014, will be celebrated as Koningsdag, King’s Day, which is officially on 27th, the King’s birthday but if that falls on a Sunday, they celebrate early. They are celebrating all month here at Hotel De L’Europe.  The magnificent tall lobby, mainly scarlet but highlighted by eight crystal chandeliers and big blow-ups of Old Masters characters from the nearby Rijksmuseum, now has lots of portraits of the Royal Family.  Two more show Obama.  In one, taken March 25th, 2014, he is in front of Rembrandt’s Night Watch, which normal people can only see through a melée of other art-lovers.  In the other he was with the royal couple. 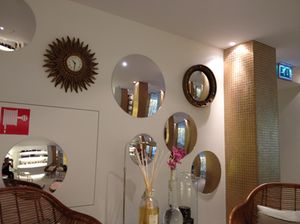 The hotel itself has much to celebrate.  This January it opened its SKINS Spa, bringing in one of Benelux’s well-established names right into the hotel.  SKINS was started here in The Netherlands in 2000, by Philip Hillege and it now has two spas and nine stand-alone shops, with another opening in May in Ibiza.  SKINS, the Institute, specializes in niche products and allowing consumers to try and test before buying – it also has a very impressive website with online ordering.  SKINS, the spa at Hotel De L’Europe, has transformed the gorgeous hotel’s wellness: the gym has been expanded, with new Technogym equipment, and the pool has been incorporated into the whole spa experience. 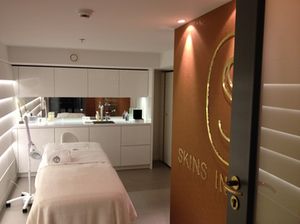 There are saunas and steam rooms, and the treatment rooms are lovely, cream and gold and fresh and clean.  SKINS advertises that one of its best-selling products is Patyka from Paris, but in fact the highly-skilled therapist who did me used Marie Veronique Organics MVO, produced in Berkeley CA by one-time chemistry teacher Marie Veronique Nadeau, who started experimenting with ingredients, in her own kitchen, to help cure her lifelong rosacea – her products are now also in Auberge Resorts, and at Sundance. But honestly the best thing about this facial, here at SKINS in Hotel De L’Europe, was the totally amazing facial and neck massage, which consisted of pulling and tweaking little bits of skin as though I were a plucked chicken. 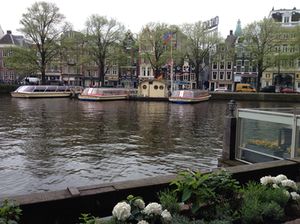 .. and the view from spa’s own terrace

Could I do that all myself? Yes, possibly, but I would run the risk of pulling and tweaking in the wrong places, wrong directions, and I would end up looking like a polka-dot fabric rather than the ideal poulet de Bresse. I also would not be in the right ambience. After whatever treatment at SKINS spa here, you can relax inside, or, in summer, outside on the spa’s own terrace, cantilevered over the water.  I think of other spas over water, Naladhu and One&Only Reethi Rah, and under it, Hufaven Fushi – all in the Maldives (it is too long since I was in those glorious islands). 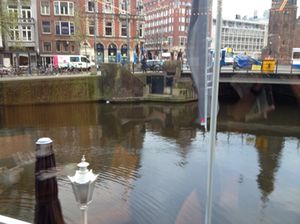 I wake up, feeling a thousand times better, and head up home, to suite 424 in the old block of this distinctive and oh-so-central luxury hotel. I look out of the window, across the Amstel to Munt Plein and its throng of bicycles and other activity. Like all rooms in this block, the room honours a Rijksmuseum Old Master – this one has two blow-ups, one about eight by six feet, the other smaller, of a still life of three copper pots.  Fortunately there is no sign of President Obama standing in front of it…. gollee, I am hungry….