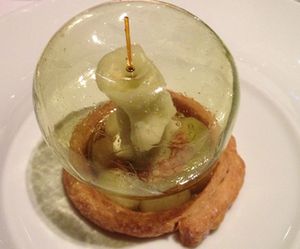 Is this an apple core in a cage?

After all that incredible art in the Rijksmuseum, now there is culinary art here at Hotel De L’Europe, one of Amsterdam’s most significant luxury hotels.  This dessert, in Bord’Eau, looks like an apple core in a bubble. How it got in there is a mystery. In fact the entire thing is divinely edible – it is not an apple core at all, but a confection of green apple ice-cream, walnut and caramel. Bord’Eau’s chef, Richard van Oostenbrugge, and his team are full of surprises.  This restaurant was formerly, by the way, a massive all-purpose place until the hotel’s boss, Tom Krooswijk, broke it into smaller areas, including a cigar room that is very popular, including with female smokers. What to call this fine dining emporium, which now only has 42 seats? Tom Krooswijk’s wife, a canny pharmacist, said well, it overlooks the canals, bord d’eau… The gal was told to book early as it is a sell-out, every night. 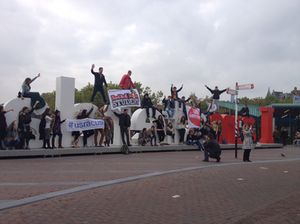 What are these people doing on the I Am Amsterdam sign?

Why? Amsterdam is incredibly popular, and not only at tulip time.  With four airlines flying nonstop from China, and Schiphol airport’s reputation as best in Europe, superb public transport and a unique atmosphere, people want to come here.  The city’s promotion board, I Am Amsterdam, is pretty effective – see the youngsters climbing all over the I Am Amsterdam sign outside the Rijksmuseum.  Girlahead tip for the day. Plan your trip ahead and, if it is a Tuesday through Saturday evening, book a table at Bord’Eau (it also has a ten-seat Wine Room if you want a special party, by the way, and the Sommelier, who handles over a thousand different labels, is the talented Daphne Oudshoorn). 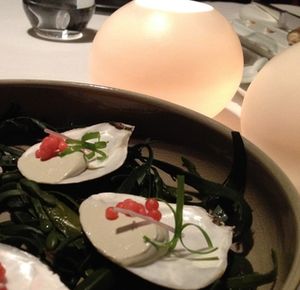 Our dinner at Bord’Eau was memorable from start to green-apple finish. The kitchen sent out a couple of amuses as preambles, starting with absolutely heavenly oysters creamed with pearls of wine jelly.  Daphne Oudshoorn brought out, presented and poured, a bottle of Gevrey Chambertin 2008. A group of Chinese at the next table were enjoying the wines, and the many Dutch around were here not only for food but good conversation.  I loved my salad starter, with pistachio oil, couscous-style rice and Pierre Robert cream, made from the Seine-et-Marne decadent triple-cream cheese created by Robert Rouzaire and his friend Pierre.  I went on to turbot, with mussels, broccoli and chanterelles. 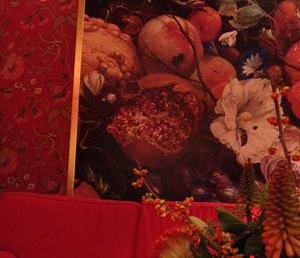 The Bord’Eau tables were set with Bernardaud, Christofle and Riedel, and white linens, and nightlights in slightly-pink bulbous holders. No flowers were needed.  There were flowers galore up in corner room 302, where designer Cees Gregorius has dared to hang a Dutch Old Master floral picture on a deep salmon wall that has an overall floral design. And the fresh display of flowers on a table in front only adds to the Chelsea Flower Show feel – would a simple bunch of tulips, at tulip time, fit in so well?  By next tulip time, by the way, this hotel will have its new spa, SKIN… cannot wait. 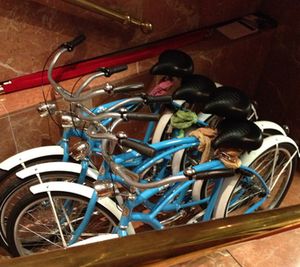 Next time I will try the SKIIN spa, and take one of the hotel’s bikes for a spin. I think of all the places I have cycled in the world. On a bike from Hotel Atlantic Kempinski, Hamburg, I went round the Alster lake. At Four Seasons Scottsdale I careered over Arizona dunes. At Arniston Spa Hotel, on the coast 90 minutes’ drive from Cape Town, I was bitten by a local dog and needed a rabies injection. At Gleneagles I got lost and was late for breakfast with Peter Lederer.. Not a good thing to be late for the bosses of luxury hotels!  It is time to leave Hotel De L’Europe. Over breakfast, an affable Greek server went into details of Dutch wine growers. 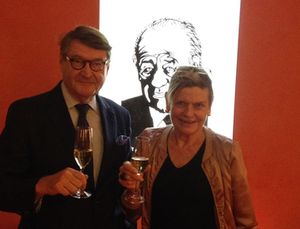 His list included the former Porsche driver Ben Pon who owns Bernardus winery and the Bernardus Lodge in California’s Carmel Valley. The De L’Europe’s driver Danny, in an Audi Quattro with WiFi, was rarin’ to go, but guess what, there was Tom Krooswijk, glasses of Billecart-Salmon ready, standing in front of the illuminated sketch of the late Alfred Heineken (the bar here is called Freddy’s, in his honour – Heineken still owns this gorgeous hotel). It was eight a.m. Good thing I had not kept him waiting.