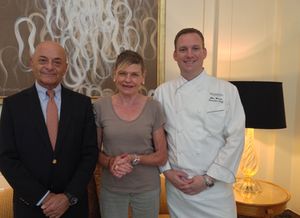 What a lovely surprise, my first morning back in the Windy City, to run into the most august early breakfasters – sorry, other early breakfasters – here at The Peninsula Chicago. Here is company COO Peter Borer. Why are you not in the French capital, where The Peninsula Paris opened only six days ago? Been at that luxury hotel, he tells the gal. Now here, going on to Los Angeles and then to the Peninsula-run Quail Lodge for a car rally. He is bright as a button, as always, and chef Mike Wehrle is already on hand, at this early hour, to find out Mr Borer’s breakfast requirements. 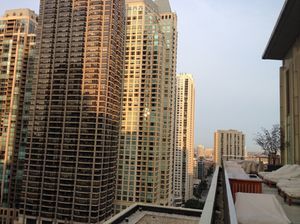 I hope he, too, has some of the absolutely amazing Fonte coffee that the hotel serves. My first cup was up at the gym, which sensibly opens at five and was already pretty busy with locals by half past that hour. The words ‘up’ and ‘pretty’, by the way, are intentional. The gym is on the top floor of the 20th floor hotel, with stunning views, and the people working out are, to say the least, pretty fit, which always encourages others around them. After watching CNN for half an hour, while using an elliptical as hard as I can, I head for the 19th floor indoor pool and its adjacent outdoor balcony. 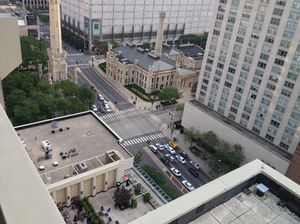 Everything, including Chicago’s historic Water Tower, looks so tiny down there. I think back to other monuments that look so small from above, like London’s Tower Bridge and even Sydney Opera House. Here, on a fine sunny summer day in Chicago, business is already beginning. Later, Miracle Mile – Michigan Avenue – will be one dense swarm of people, most of them carrying enormous shopping bags (Victoria’s Secret pink-striped bags stand out). The Peninsula thinks of everything. I have a serious jogging-running map, and an equally significant map to all the local retail names, including Apple. 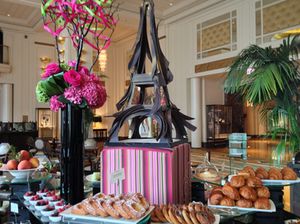 A version of the Eiffel Tower on the breakfast buffet

I also have the biggest Apple computer I have ever seen. It must be 30 inches from left to right and it dwarfs my little MacBook Pro as if it were a mere David. You can, by the way, always recognize a luxury hotel that is run by a woman. I have scissors in my room, always so useful for those who travel hand-baggage only. Talking of travel, arriving at Chicago ORD – coded for its original name Orchard Field airstrip, though its official name now is for legendary naval pilot Lt. Cmdr. Edward “Butch” O’Hare – is now a divine doddle. There are do-it-yourself immigration kiosks, so simple. Back to this lovely hotel, look at the breakfast buffet, honouring The Peninsula Paris… and this is not all.