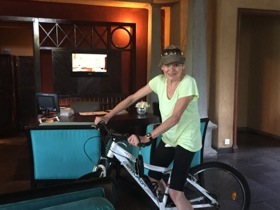 Cycling through the lobby

This was a first – but then the gal has so many. At the Ramdanee family’s Maradiva luxury resort on the south-west coast of Mauritius, you can borrow bikes from the sports centre to take lovely spins along the flat roads through nearby sugar cane fields. But how to get out of the 60-acre property? Apparently there is a back way but it was not easy to find so, guess what, it was a case of cycling right through the lobby. Sanjiv Ramdanee is a stickler when it comes to decorum and he would not have been best pleased, but fortunately he was not there. 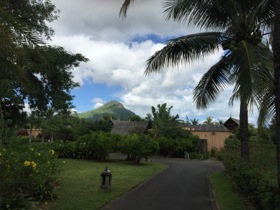 I do admire people who do things right, following tradition. Sanjiv and his sister, whose father-in-law is Sir Anerood Jugnauth, Prime Minister of Mauritius, have both been elected as Lifetime Members of the Royal Enclosure at Royal Ascot. For the 2015 event, their first appearance, Sanjiv is having a morning suit made by Gieves & Hawkes in Savile Row, his shoes somewhere else in London, and so on. And you can read here about his vintage hat. Back to the 65-villa resort, which has been run by its owners since 2009, and very hands-on they are, or at least Sanjiv is. 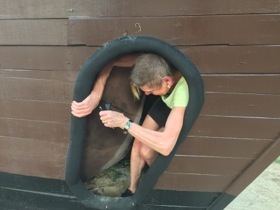 Climbing out of the pirate boat

Paul van Frank, the resort’s GM who I had first met at Ananda in the Himalayas and then, later, here on Mauritius at Shanti Maurice, took me on a tour of the property. At the kids club I wanted to climb up on the pirate boat. The only way is, as they say, up, through a tiny hole in the hull. Getting in and up was all right, getting out was a completely different story, especially for Paul van Frank, who started off with a pristine pale pink shirt with a white collar. We laughed so so hard, and continued on our way, to look at the over-half mile of private beach and more. 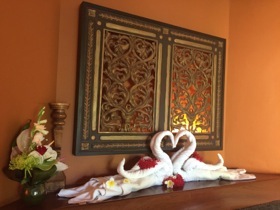 Swan towels above my bedhead

Villa 106 has a private pool and the living area, with minibar and coffee machine and both are outside, but under cover. Inside the main air-conditioned room, I had teak floors, and some rust paint to relieve the otherwise-cream of the whole. Aha, said Sanjiv over dinner. Wait until you see what is going to happen soon. Even now a lot of Russians come here – one party of 76 took over the entire resort the other day. And because we know Maria from Moscow and Sergei from St Petersburg love BRANDS, Sanjiv is replacing villas’ rust-coloured walls with distinctive Hermès wallpaper, and the current Blaise Mautin toiletries, bespoke for the hotel, will give way to Hermès. 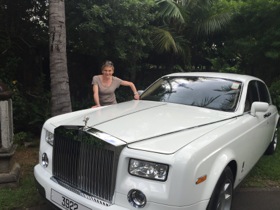 This is a luxury hotel that has several unique features, including a mature white Rolls Royce. Sanjiv told me he bought it second-hand, had it tidied up and put in new interiors. I actually felt as if I was going to the Royal Enclosure myself!