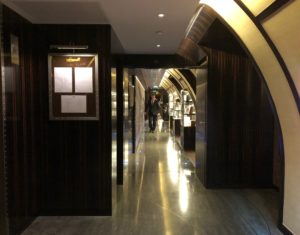 Oh to be in Paris in springtime and, indeed, it was the official first day of spring (no matter that it was still snowing outside). A charming Cambodian drove the Peninsula-green BMW up to the main door of The Peninsula Paris; a page girl in pristine white was among the smiling meeters and greeters. A short while later the gal was up in the Palace hotel’s seventh floor rooftop restaurant, looking out at a lifesize white plane hanging in infinity. This is a replica of the unique L’Oiseau Bleu, the bi-plane in which WWI aces François Coli and Charles Nungesser disappeared while attempting, on 9 May 1927, to fly the Atlantic before Lindbergh – the copy was made, for The Peninsula’s aviation-loving Chairman The Hon Sir Michael Kadoorie, by the English firm Gateguards. 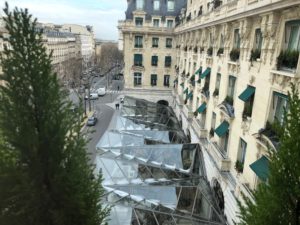 Looking down from suite 310

I always feel at home in a Peninsula hotel. Everything works. Interior signage means it is impossible to get lost, and in the room electronic signs are in one’s natural language. End suite 310 looked down at the glass-topped terrace embraced by the C-shaped main building: I looked along rue Kléber to the Arc de Triomphe. The suite was extremely comfortable, with masses of space. I had remarked on arrival that the handle of my beloved Porsche Design Rimowa wheelie ‘est malade’. No problem, said GM Katja Henke, let us take it to the Rimowa hospital. So I emptied everything out, a bellman collected it, and a concierge returned the rejuvenated item two hours later – well done not only Rimowa but also Peninsula. 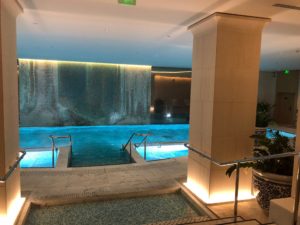 This is a hotel for style lovers, those who appreciate Henry Leung’s plush interiors, and the gorgeous pool, all 100 feet of it. History buffs understand the appeal of staying where George Gershwin wrote An American In Paris – in 1928, on commission from the New York Philharmonic – and where, in 1973, Henry Kissinger, then the US National Security Advisor, signed the Paris Peace Accord. 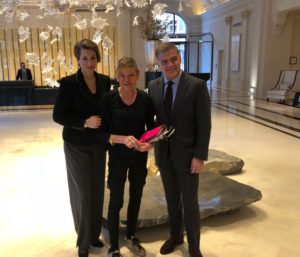 This is also a hotel for families. An exclusive agreement with Walt Disney means kids can have breakfast in the Walt Disney store on nearby Champs Elysées, and doubtless their parents will buy a few souvenirs at that time (you can also stay in the hotel’s Disney-themed bedroom, which comes with suitable costumes, giant soft toys, confetti and more). And all ages can eat, gloriously. I started my L’Oiseau Bleu dinner with an onsen egg – see a video below. Cooked at 63 degrees for 45 minutes, and covered with smoked eel, celery and apple it was, well, totally delicious, especially with a glass of La Vieilles Vignes Meursault 2015 Vincent Girardin. We looked out at the Eiffel Tower, and, true to form, at every new hour it twinkles from top to bottom and back again. No wonder this 40-seat restaurant, where chef Christophe Roux holds court, is packed every lunch, and dinner. In the morning, after a good work out in the luxury hotel’s LifeFit gym, which opens at 6.30 a.m., I was just about ready when Katara Holdings’ Man In Europe, Omer Acar, called round for breakfast, preceded by a photo session in the lobby, in front of Henry Leung’s Dancing Leaves  mobile (800 plane-tree leaves, each weighing a kilo, hand-blown in the Czech Republic by Lasvit – the whole taking five men two weeks to install). Yes, this is a luxury hotel with a myriad of memory points, including a farewell lineup that included Concierge Nicolas Avril who had last seen-me-off in Geneva many years ago. NOW SEE VIDEOS OF SUITE 310, AND AN ONSEN EGG