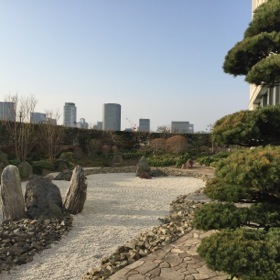 12th floor terrace, off the lobby

The 12th floor lobby of St Regis Osaka – it opened 2010 and is the only St Regis in Japan, so far – has what the gal wish all luxury hotels would have, namely a soothing outdoor terrace. Summer-long this is a haven for meeters, loners and, presumably, smokers. Which other upper-floor lobbies have gardens immediately outside? In Delhi, The Oberoi Gurgaon does, but actually the hill around its fifth floor entrance is man-made. Closer to here, at Ritz-Carlton Kyoto, you walk down a floor from the outside street entrance to reach the lobby, which has a garden, if not a terrace, outside (coincidentally Ritz-Carlton Kyoto and St Regis Osaka are both owned by Sekisui House). 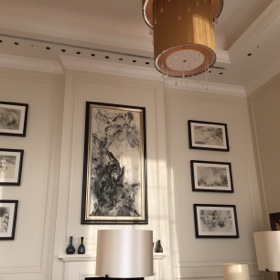 The lobby is elegantly tall

But whereas the inner lobby of Ritz-Carlton Kyoto, designed by Peter Remedios, is deliberately dark and theatrical, here in Osaka GA International‘s lobby design for the 140-room St Regis is light and bright, soaring up to a height of 20 feet. I was taken up to 2782, an ideal suite for a senior Japanese executive who wants to hold meetings for ten colleagues in a business-like dining room, a haven of sandalwood and old-gold colours. The sun was shining, so I went back down to street level and followed the hotel’s excellent walking map. Fifteen minutes north along Hommachi, waiting for ages at intersection traffic lights watching bicycles swerving to make it before lights changed, did indeed bring me to a small river. 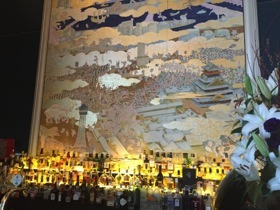 The bar has a typical-St Regis artwork behind the counter

Retracing my steps, I popped into a 24-hour Family Mart. All groceries are neatly packaged. Eggs come in tens, in clear plastic containers with a photo of an egg on top, just in case there was any doubt. Want loose tomatoes? Forget it, buy however many they already have packaged. I popped into daytime-only Sasa Japanese Grocery, which was similarly pristine but with wood rather than plastic shelves, and servers in designer aprons (somehow Bonne Maman jams had found their way in here). Back home, I admired yet again the giant saga-painting that hangs behind all St Regis’ bars: this one has lots of gold and presumably tells some ancient Japanese epic. Drink the house Shogun Mary, their Bloody Mary, with wasabi, and fathom it out. 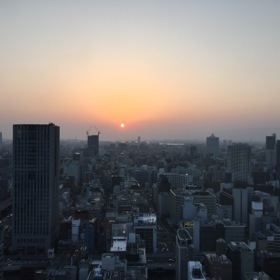 I studied the walking map again. It would only take me a total of 70 minutes to head east and around historic Osaka Castle, and back – I cycled it, early morning, on my last visit. I do think that, where the location is as flat and safe as here in Japan, walking maps should be essential in all luxury hotels. And if you do get lost, someone will help. The other day I became completely confused trying to navigate around Tokyo central station (JR, not Shinkansen), bowed to a man and said ‘Hiir-u-ton?’ (what the Japanese call Hilton) and the lovely guy, not speaking a word of English as far as I could tell, led me all the way, ten minutes’ detour for him.