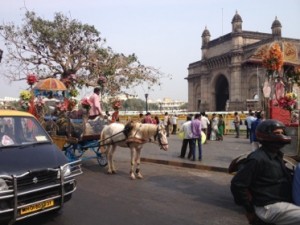 Looking at the Gateway, on arrival

The gal has seen it before and she looks forward to seeing it again, many times – The Gateway of India, directly across from that glorious historic luxury hotel, The Taj Mahal Palace. It is impossible to drive right up to the Gateway but that does not stop thousands strolling, especially at weekends. They are drawn by the George Wittet-designed arch (85 feet high, basalt) erected to commemorate the landing here, in 1911, of King George V and Queen Mary. It later became a ceremonial entrance to India for Viceroys and Governors of Bombay. 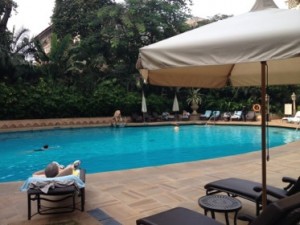 Only a hundred yards as the crow flies – and by the way, there are thousands of them living in this area – is the peaceful oasis around the pool of the Taj Mahal. Somehow, here, the noise of the city is muted by the buildings, the six-floor Palace hotel and its adjacent 20-floor Taj Mahal Tower hotel. It does seem somewhat incongruous to see European tourists sunbathing, in miniature bikinis, but, well, this is India and anything goes, within reason. Sitting on the covered terrace overlooking the pool is a gloriously relaxed way to start the day, or continue talking, or having a gin and tonic – Bombay Sapphire, of course. 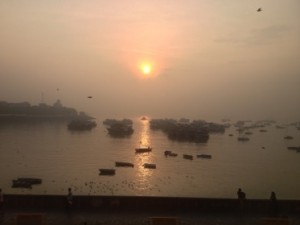 Sunrise, from the Sea Lounge

Actually I have decided the best way to start the day is breakfast in the hotel’s Sea Lounge, on the upper first floor. Get there early for a window-set banquette, facing each other as if in a railway carriage‘s first class. Face the sun, for yet another glorious sunrise. Why do I like this as a breakfast venue? It is less crowded than downstairs, and, also, the attendant omelette chef does a remarkably good job. Taj’s (how do I write that?) – the Taj hotels in general –  also produce superb baked yoghurt, in hand-crafted ceramic pots. 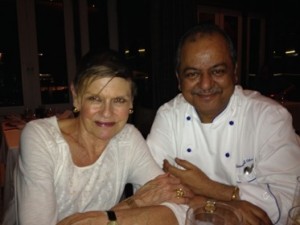 Hemant Oberoi, in between Davos and Penang

But this luxury hotel can do any kind of food, including Arabic, in Soukh, atop the Tower block. I dined with my friends Gaurav Pokhriyal, the GM, and his deputy, Parveen Chander Kumar, in Wasabi by Morimoto, and I had just taken a delicate mouthful of black miso cod when Hemant Oberoi arrived, fresh from Davos. This is the Taj corporate culinarian who is action-man every minute: he had headed the Indian pop-up restaurant at the World Economic Forum and tomorrow he would be off to Penang to the World Curry Festival. We toasted each other in one of Taj’s newly-released bespoke-label wines, a Penfolds Koonunga Hills Seventy Six Shiraz Cabernet 2010, 66 percent Shiraz, 34 percent Cabernet Sauvignon. I hear about the BBC reality-television series on the hotel made by The Garden Productions, who had earlier done Claridge’s – so far, the programme, which took six months’ onsite filming – has not yet been shown in India. And then, eschewing elevators as always, I climbed 122 stairs, up the Grand Staircase, to bed …