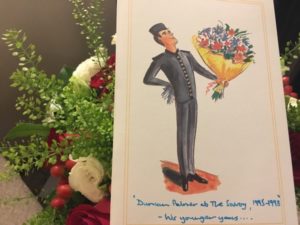 Welcome to Hong Kong, the wedding couple seemed to be saying – they were having their photographs taken on steps in front of Hullett House – she wore her long white gown, with train, he had a blue suit, and dirty red trainers. A few yards away a selfie spot had been set up, as shown above. Make A Splash, make a memory. There was certainly a memory for the gal, a card and flowers from Duncan Palmer, who will be opening Hong Kong’s next luxury hotel, The Murray – A Niccolo Hotel. Sadly he was not in town, but far away selling the concept of the hotel to travel advisors eager to hear What Duncan Is Doing Next. In fact I stayed in The Murray’s sister hotel. 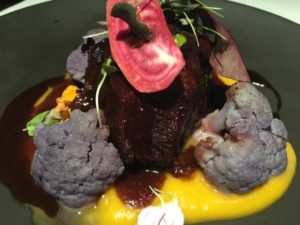 This is the well-estabished Marco Polo, a mammoth 665-roomer run, like two other adjacent siblings, by a highly experienced German, Thomas Salg. Room 1712 was very comfortable, and I loved looking down at Hullett House, and the YWCA, and that selfie spot: one of the stores right by it is Victoria Beckham Eyewear, an over-the-top presentation that opened a couple of weeks ago (watch the video, below, to see the view, and the room).

We dined in the Marco Polo’s Cucina, where really likeable chef Andrea Delzanno, from Piedmont, suggested his own menu favourites, Puglia burrata with tomatoes, basil, and 24-month Parma ham, and then slow-cooked cheeks of US wagyu beef served on a pumpkin purée with porcini and Barolo sauce. 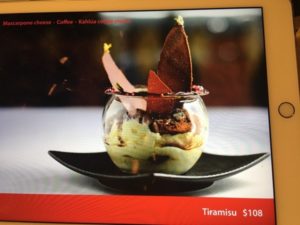 Just as we were drinking his health in Therra 2011 Podernuovo a palazzone, Delzanno came over to see how it was all going, and brought his dessert menu, on a tablet. I was with two of Duncan Palmer’s colleagues from The Murray, his hotel manager, Dean Dimitriou, and his communications supremo Anton Kilyoko, whom I have known from his Ritz-Carlton Millenia, Singapore, days, at least a decade ago. I heard about The Murray’s own restaurants, which will include Guo Fu Lou, designed by André Fu – all these Fu’s could get a bit confusing. Guo Fu Lou will be run by the Fook Lam Moon Group, and is destined to be highly popular with locals, always an important factor when designing a hotel eating place. 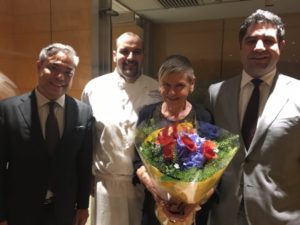 Locals will anyway warm to The Murray, which should begin opening end-October 2017. When it began as offices in 1969, the 27-floor building was tallest in Hong Kong, and the windows are meticulously oriented to avoid intrusion of excessive direct sunlight. Dean Dimitriou, and Anton Kilyoko are, indeed, insistent that this will be a thoughtful hotel at every stage (as a new hotel, we have every opportunity, says Dimitriou, to adapt modern technology to allow OUR customer service to be just right, for each individual). Next time in town, the gal must try The Murray but, for now, the Marco Polo provided just the kind of warm luxury hotel experience that makes me happy to be back in this dynamic city. NOW SEE THE VIDEO, BELOW