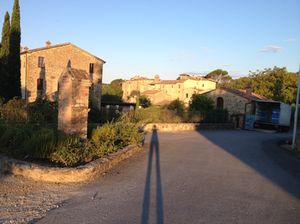 Giacometti? No, it is the gal’s shadow

This is not a Giacometti sculpture but the gal, or rather her shadow, pointing towards part of the 130-acre village that is in its entirety Castel Monastero, 16 miles from Siena.  The village had been on this rural hilltop from the ninth century – its working church is said to date from 860 AD. The Chigi Saraini family were the landlords until 1975, when the fief passed to Lionello Marchesi. It opened as a luxury hotel in 2009, part of the Fortevillage Resort/Eleganzia Hotels & Spas  family. 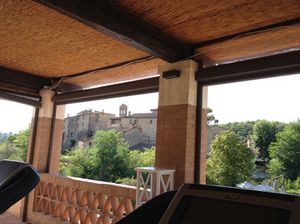 View of the ‘village’ from the gym

Every time you visit, you are amazed at how 76 rooms are more or less hidden away in old village buildings. You marvel at the imagination of architect Eric Egan to site the Technogym in a room with three open sides on top of the spa’s thermal pools.  Work out and look out, over the three outdoor pools (one only 60cm deep, perfect for kids) to part of the main block.  The spa, by the way, is serious.  Last time I was here they had as visiting consultant Dr Ali, the legendary medical guru who looks after Prince Charles and a handful of Russian oligarchs.  Now they are cleverly signing with Dr Giorgio Calabrese. 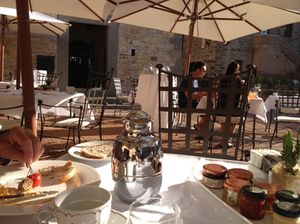 Breakfast, from your table…

Surely that name cannot be true?  It is.  Calabrese is Italy’s best-known television nutritionalist. advising on how to eat, not only to combat diabetes, heart problems or obesity but just to eat, healthily..  Part of his credentials is that he looks after the Juventus football team in Turin.  Anyone who helps footballers maintain a life-enhancing diet is obviously good for luxury resort guests, and here he will be doing detox and weight-loss programmes, and helping with post-surgery recovery. Of course being in Italy everyone can eat superbly.  Take breakfast.  After, say, a cycle ride through some of the vineyards, sit in the village’s main square, now the hotel’s open-air courtyard. 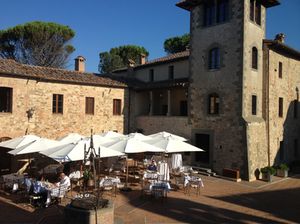 You help yourself from a buffet in a nearby room, with about six types of burrata and mozzarella, and other, well-labelled, cheeses, hams and slices of fruit tart, and fig jam and other Italian-special goodies. Somehow breakfast outside is extra special, especially when you are sitting right next to the old village well, now decorated with pots of bright scarlet geraniums. Look down on the scene later, from suite 14, favourite of Lorenzo Giannuzzi, the boss of Fortevillage Resort who looks after this resort too.  He must like the all-wall scenic fresco behind the wood bedhead, and the lovely oak floors throughout, and the view to the square. 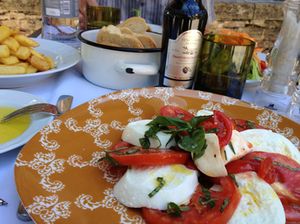 One of the world’s best caprices

For lunch, laze by one of the pools, or sit outside, next to the vineyards, on the terrace of Il Cantina. They do one of the world’s best caprese salads here, with tomatoes that are sheer heaven.  Pour on lots of Frantoio di Santa Téa oil from Gonnelli 1585.  At dinner, eat Tuscan food inside in Il Cantina, the tennis court-sized wine cellar of yesteryear, now reached by 32 old stone steps from the main square.  Choose, alternatively, the international gourmet fare of Contrada, which consultant Gordon Ramsay visits once a year. 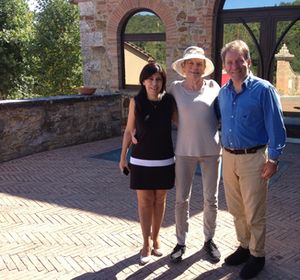 Because it is so spread out you hardly ever run into other people staying here.  Last week there were 20 aspiring Chinese models – legs thin as grissini, apparently. The week before, Gina Lollobrigida arrived – yes really, she is not only still alive and well but still, at 86,  perfectly beautiful, apparently.  She was here in her role as ambassador for Pagani cars. As I arrived, six vintage touring cars were on their way out.  As I left, I was seen off by the pair who run this luxury hotel, would-be psychologist Graziella Arba and one-time industrialist Enzo Volpintesta.