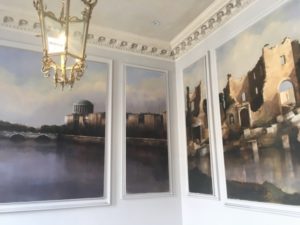 There is optimism, and sadly some pessimism, in world politics at the moment. France has not only a riveting young president who wants to change the world, or at least Europe, and he comes with a wife that every sixty-ish woman the world over wants to look like. Across the Channel in England there is a lame duck who started out so well but, oh what horrors already. Ireland has a new Taoiseach, Leo Varadkar, only just 38 years old, a gay doctor whose previous political role was Minister of Transport, Tourism and Sport, which bodes well for the hospitality industry. The gal was actually at Dublin’s Merrion hotel when he came to visit but he was late. All that was visible, above, were heads of waiting security. Never mind, there is so much to see in this gorgeous luxury hotel. 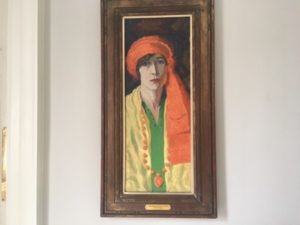 This could be called the house that Peter made, ‘cos Peter MacCann, the unassuming photophobic GM of the 143-room beauty was here months before its opening, in 1997. He and his wife Dorothy, guardian angel and branding specialist of The Merrion, have put in new ideas, and zealously maintained a past that includes one of the houses that form the hotel – it was the birthplace of the Duke of Wellington. It is they who have devised a highly professional do-it-yourself art tour, to walk around the place looking at some of the hundreds of pieces of valuable Irish art loaned by Lochlann Quinn, a co-owner of the hotel (all the owners have been in it since the start, which creates so much depth to the property’s DNA). Up the stairwell of the main staircase are murals by Martin Mooney. Down in the lobby itself are Jack Yeats paintings, The Hour of Sleep, and one called Defiance. 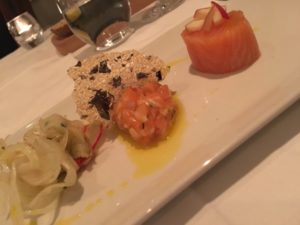 Right now the building rises to six floors on one of its three sides, all wrapping around a beautiful garden. Here you find a lifesize sculpture of James Joyce by Rowan Gillespie. Go down to the basement, to the indoor pool, and you swim to the allegory painting at one end, a wall covered with swathed drapes, and a garden with exaggerated perspective, and neat parterres. Monkeys cavort in this mythical countryside. One of my favourite paintings is actually a 1912 self portrait of Elizabeth Saurin, an Irishwoman who went through a Paris period and married the more famous William John Leech, 1881-1968, though they divorced after two years. Come in through the doors of The Merrion today and you are instantly immersed in Irish history, and you eat, if not drink, Ireland, too. 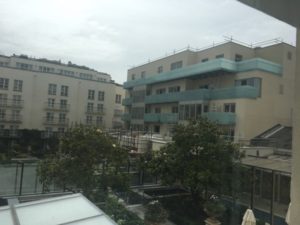 Looking out at the new block

I dined off Clare Island salmon, cured and tartare, from the Co. Mayo island that was once home to pirate queen Gráinne O’Malley. It came with local soda bread (sorry, I drank a Coravin-store wine by the glass, Ch La Lagune Haute-Medoc 2008, rather than pints of Guinness). At breakfast, specialities include a full-Irish, with black and white puddings, and fried bread: want porridge, and you have a choice of milk, or the arguably more-healthy water – personally, I would switch to the jars of Killowen Farm macrobiotic yoghurt, among the world’s best. A Green Team of hotel staff makes sure that history is paired with today – it is the Green Team which came up with the idea of a rotating wheel to say yes, please re-use my bedsheets (so much more fun than a static card). But then this is a luxury hotel that is constantly evolving. I look out of my tall-tall windows at the garden, and what will be a new Garden Room restaurant, with six new already-sold residences. When all this opens, before year end, there will be plenty of celebration, as there will be in 2018, when The Merrion reaches 21. A luxury hotel comes of age. NOW SEE THE VIDEO OF ROOM 187, BELOW