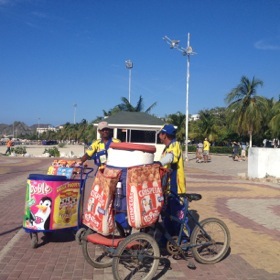 Santa Marta, Colombia, is one of those ports of call that are best visited by a luxury cruise ship. The gal enjoyed her short stay but it was over a hundred degrees that day and humidity must have been over 80 percent. No-one was moving very fast. Some of the passengers onboard Silver Cloud opted to stay onboard and watch the mesmerizing container port operation. A line of trucks drove in bearing full-size containers, picked off as if by magnetic mega-pincers and put on top of a growing stack, one per minute. The only vendors doing any business in town were those selling cold drinks or ice cream. 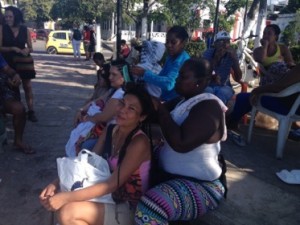 There was considerable business, too, at the hair-braiding stations, kind of pop-ups with a few braiding ladies sitting in the shade and plaiting tresses into imaginative styles.   I wandered a little and found one hotel, the Colonial, with some guys hanging around outside it. Santa Marta, with a population of 425,000, is the third largest town of Caribbean Colombia – after Barranquilla and Cartagena – and pretty much a hanging-around kind of place. It does have considerable history, however: the oldest city in Colombia, it was founded July 29th, 1525 by Spanish conquistador Rodrigo de Bastidas, and Simón Bolívar (full name Simón José Antonio de la Santíssima Trinidad Bolívar y Palacios Ponte y Blanco), born in Caracas 1783, died here, December 17th, 1830. 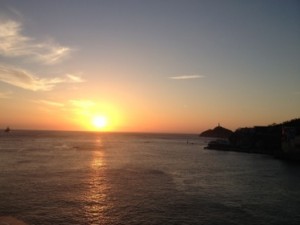 Sunrise as we sail into Cartagena

But then, the following morning, we sailed into Cartagena and, after three years away, it was like coming home, although Cartagena has achieved an even greater international following in the intervening years. It has an annual Hay Festival Cartagena, an offshoot of the Hay on Wye literary event – the next, its tenth showing,January 29th – February 1st, 2015, features Javier Cercas, Steven Pinker and dozens of other writers (sponsors include the BBC, the British Council and The Telegraph – and the beautiful and historic Santa Clara Sofitel Legend here in Cartagena). 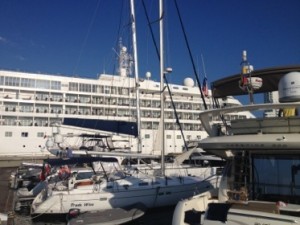 A sea of white vessels, including the super Silver Cloud

Many of the participants will be staying at what is without doubt the top luxury hotel in Cartagena, if not in Colombia. I am on my way there right now… Silver Cloud moors in one of the city’s marinas, and joins what looks like a sea of white vessels. I am met by butler Rudi, in pristine white.