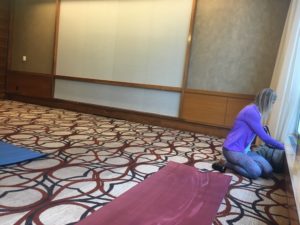 Kate, getting ready for yoga, looks like an artwork

Baltimore, Maryland, deserves far more attention – thank you, Skift, for recently promoting the fact that the city now has, thanks to a trio of Baltimore success stories, three luxury hotels, and the gal went to visit the two of them that are on the river. First up was the 256-room Four Seasons Hotel Baltimore, developed by John Paterakis, whose family bakery, H&S, seems to be one of the biggest manufacturers of burger buns – and more – in the USA. The hotel opened late 2011, right on Patapsco River at the entrance to the Inner Harbor, and it showed that this city did indeed have an appetite for quality. It is a hotel that, for some, has many reminders of Four Seasons Hotel Seattle, with water views and internal art: interestingly, here in Baltimore real life almost blends with the art. See colour blocks in a lobby picture, above, and compare them with Kate, the yoga teacher, getting ready for a class. 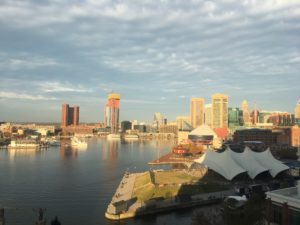 All summer long the regular Saturday morning yoga classes are held outside, by the pool that seems to float, as it were, on the hotel’s deck. Come winter, and weekenders who enjoy staycations here obviously prefer lie-ins to lie-on-your-back-and-do-contortions, so I had the hour-long session to myself. I had woken up in 807, an end suite with views on three sides over the Patapsco River (be prepared, in your room at this hotel, for motion sensors – if you do not move for what seems like a short period of time the main lights go off). I was actually still recovering from the 45 minutes I had spent on a Technogym jogger, playing sudoku, last night after dinner, as we ate really early. 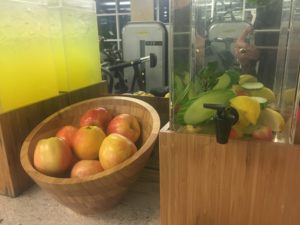 Still life in the gym

The all-purpose restaurant here also reminds me of the Seattle hotel’s. Both, in destinations that are super-rich in dining opportunities, work with outside specialists. Here, Michael Mina runs Wit & Wisdom, a real old-style tavern with wood tables and a wood-burning oven.   The dinner menu is complemented by an oyster hour, from five, which meant our 5.30 start allowed us a preamble to the meal-proper with a tasting of East Coast oysters, which went really well with Stolpman Vineyards Sauvignon Blanc 2016 – afterwards, following a server’s suggestion, I had red wine-braised short rib with beluga lentils, cauliflower florets and pomegranate seeds. 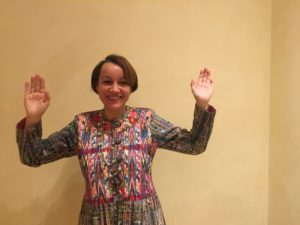 I had earlier seen Julien Carralero, the opening, and current, GM of this friendly and delightfully no-attitude luxury hotel, but he was rushing off somewhere or other. I dined with his deputy, the equally charming Nancy Chacon, a Guatemalan who joined Four Seasons San Francisco Clift after graduating in Business and French in that city. As it happened she too was rushing off, to hear her five-year old son singing during the half-time of a soccer match – so I took off as well, to exercise body and mind. This is, by the way, a hotel that is ultra guest-centric. A personalised note on my bed said the bedding was all hypoallergenic, and I slept like a log, and, after breakfasting back in Wit & Wisdom where a Tavern platter means eggs come with bacon and potatoes, and the bill comes with exact suggestions for tipping 18%, 20% or 22%. NOW SEE A VIDEO OF THE SUITE, BELOW