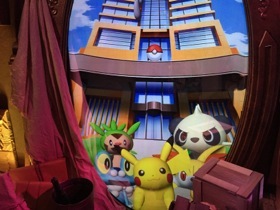 Pokémon characters at the ready

Here are some of the Pokémon, exclusively in one of the world’s top luxury hotels, The Peninsula Tokyo. Its creative GM, Malcolm Thompson, is still at heart the theatrical specialist he originally set out to be (until, like so many leading hoteliers, he was diverted into hospitality). He hosts regular brainstorming sessions and thought, why not Pokémon? The game invented in 1995 by Satoshi Tajiri is now owned by Pokémon Company International and their headquarters are near here, so it was an obvious partnership, says the gal. The Pokémon team has composed a ten-stop tour for guests of this exciting hotel. Stay over, and take the tour whenever you like, solving a problem for Detective Luke and his partner Pokémon Lucario. 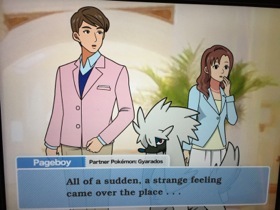 At the start of the game…

Pokémon, the main game, has so far grossed over $50 billion, and it is really addictive. Tajiri-san is still developing – when he is being really creative apparently he works 24 hours nonstop. He calls himself a games freak. Here at the hotel, the ten-stop game starts with a video screen in the main lobby, by the elevators. You have to answer questions, built around mythical P Hotels, which of course stand for Peninsula. Which P Hotel, for instance, has a really really big swimming pool? Once you have finished one station, you move on to the next, at your own timing. 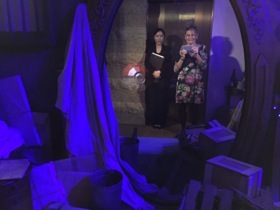 For the final, tenth, station, you have to be taken down to a special secret room, far in the basement. This is a treasure trove, of assorted Disney-esque furnishings and bits. Lights flash, and the mirror becomes a video screen, and some of the furnishings move, shake, and turn around. Smoke comes billowing out, and even adults laugh and make a noise, and real kids are, I am told, completely taken aback by the excitement of it all. There was only time for me to do a couple of the stations but I long to come again, to do the whole thing. 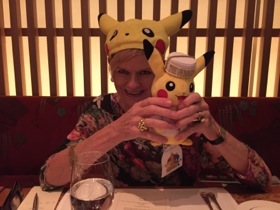 At the end, I was given a Pokémon hat, and a Pokémon Pikachu soft toy, wearing a stylished uniform as a reminder of this luxury hotel. As that creative director Malcolm Thompson always says, there is no point in doing anything unless it is fun, and this game is certainly fun. But there is also so much art at The Peninsula Tokyo….