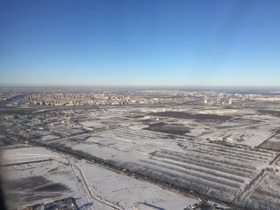 First look down, above the airport

Getting a visa for Russia is not easy. No foreigner, unless from Brazil,  Turkey or anywhere in the CIS, heads to the beautiful Baltic city for an impromptu weekend. You need to plan it a long time ahead and get all necessary paperwork. Every time she thinks of it, the gal says never again but then every time she flies in she is immediately back at home, enraptured by the city of Catherine the Great, Peter the Great, and today’s magnificent museums, theatre and ballet, and canals and, of course, its working cathedrals and superb luxury hotels. 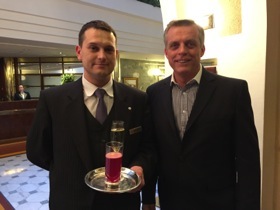 There was lots to see back home at what is now called Belmond Grand Hotel Europe. A butler and the boss awaited, with a glass of champagne and a glass of my beloved beetroot juice. I remembered the oligarch who breakfasted here, day in and day out, starting with about a pint of the red stuff and seven cross-cuts of watermelon, followed by cheese and salad. Alas, he is no more, in his fifties, he succumbed to a massive heart attack, just before going out running – but then, as with another runner, Jim Fixx, who knows how much shorter his life would have been had he not tried to take care of himself? 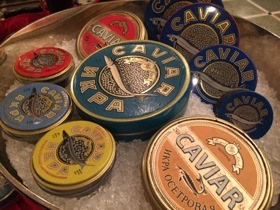 A selection of caviars

I am here to see the hotel, and to head ten minutes along Nevsky Prospekt to Kazan Cathedral, its Orthodox interior a holy theatre of icons, lights and candles and long lines of heavily bundled-up worshippers, all ages, both sexes, waiting to ask for confession. I am also keen to see what, if any, the effects sanctions are having on food. For Russians, costs have gone up 15 percent, but they can still get anything they want, other than delicate French cheeses, thanks to cunning importers who bring supplies via Belarus. We dine in the Caviar Bar, surrounded by Russians, many dining out here as, with the fall of ruble, they cannot afford to head – or sometimes are prevented from heading – to the South of France, Dubai or the Maldives. 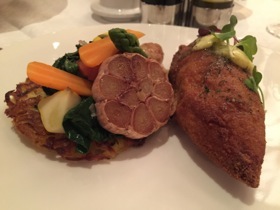 I order Chicken Kiev, and I must say that the kitchen of this 265-room luxury hotel produces the best I have ever had, served traditionally with half a garlic root, dranik, potato hash browns, and baby vegetables and melted butter. The executive chef, Ian Minnis, is Canadian, but he has been in Russia for over a decade (his wife is Russian) – he is one of only three foreigners among the total 500-strong team here.