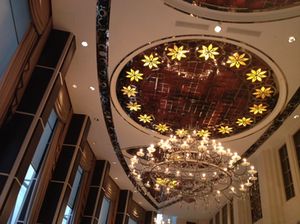 Looking up, at Les Saveurs ceiling

How many times do you look UP?  These days far too many people look down, at the ubiquitous hand-held device that no-one under ninety can do without. Someone, she cannot remember who, told the gal always to look up when in Vienna as the buildings are so gorgeous, at upper levels.  She can remember, however, looking up at plenty of luxury hotels such as Burj al-Arab in Dubai, at the Mesopotamian reliefs on the outside of InterContinental Chicago, at the twisted-tower that is Conrad Tokyo and, here in Singapore, at the unique outside hanging gardens at PARKROYAL on Pickering.  Now, back at super-luxury The St Regis, Singapore, it is time to look up at the tall ceiling of Les Saveurs. 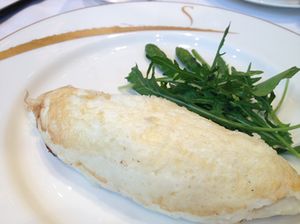 Looking down, at the suggested healthy breakfast omelette

Everything is the super-luxury, category here, and Frank Beck, the foodie who runs the place (the hotel, not only its restaurants) says he has just upgraded breakfast.  It is pretty special.  Want Chinese and you have spinach dumplings, hokkien mee, fried rice, deep-fried dough and of course several congees.  Want Japanese and it is all there.  If you are crazy about salmon, you have delicate assortments of gravadlax and smoked, and there are cheeses, and cold cuts and, what a blessing, big bowls of real Greek yoghurt – far too many top hotels in this part of the world are lazy and simply give small tubs of too-smooth, too-sweet Americanised yoghurts, mostly Danone.  Here it is the real McCoy, as are the breads. There is a chef on duty but the à la carte even offers an eggwhite omelette, which is pretty go-ahead of Mr Beck. Here it is, exactly as listed except for the suggested tomato salsa. 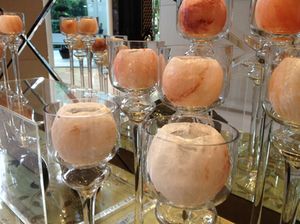 Last time here I concentrated on the real art around the 299-room hotel.  It has mostly been collected by Cecilia Kwek, wife of the owner – love the Botero sculptures, the massive modern and classic Chinese paintings in the high-high lobby.  In the outer lobby is a 20-inch glass whale by Frank Gehry, a miniature of the massive metal whale (about 20-feet across) outside Hotel Arts in Barcelona.  This mini-whale is surrounded by such a guard of honour of palest pink ball-shaped candles that it is almost lost. 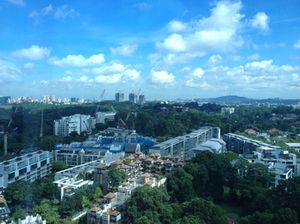 I look down from room 1901, actually a suite with oodles of polished burrwood and beef-coloured marble and lots of gorgeous fabrics, including Chinese-painted lemon silk panels that are screens to pull across between bedroom and closet and bathroom.  I look down at an array of cranes, putting up yet more buildings.  How many more does Singapore need? But from up here I can fortunately still see lots of greenery – the Botanic Gardens are in the near distance.  Is there time to run there this visit?  Which will be more valuable, a run round the park or a stint in the spa, where I can be topped-and-toed, in the form of a facial and a Bastien Gonzalez pedicure at the same time (no, do not say it, foot-and-mouth….) 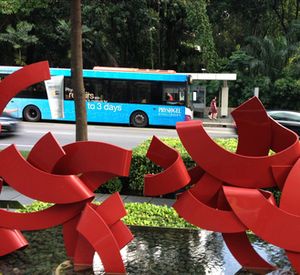 Bastien Gonzalez, for the uninitiated, is every 21st century knowing lady’s idea of sheer heaven.  His podiatrists divide a session into three, pedicure, chiropody and massage, at the end of which you feel as if you are floating on air. But it is time to leave, and the dark chocolate Bentley Brooklands with its milk chocolate interior awaits.  I come out to a farewell from the scarlet ribbon steel sculpture by Anthony Poon.  I get into the car, the driver introduces himself and says it is WiFi, and it is, and instant (sadly all too often I am told that a hotel’s limo has WiFi but it does not work, for me at least). 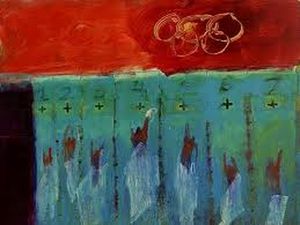 Wish I could be back for this luxury hotel’s annual Arts Celebration series, July 29th to August 4th, 2013.  This year, after celebrating Italy in 2011 and UK in 2012, it is the turn of the USA. Visiting chef during that time is Chris Kurth, from The U.S. Grant, A Luxury Collection Hotel, San Diego – will he have time to look up at the ceiling as he cooks at Les Saveurs?  Other events include a UNICEF Charity dinner August 2nd, 2013, with entertainment by 14 white-tied men from Yale, The Wiffenpoofs.  And throughout the entire event there will be an art display by Greg Burns, now based in Singapore.  What an inspiration he is.  Despite having polio as a child, he became a super-athlete, competing against able-bodied as well as taking part in several Paralympics.  It is worth reading his own words: ‘During the 80’s and 90’s I successfully summited Jade Mountain in Taiwan, Mount Kinabalu in Sabah, twice hiked down and out of the Grand Canyon in Arizona, reached the Nanga Parbat base camp in Pakistan, hiked to Namche Bazaar on route to the Mount Everest base camp in Nepal and scaled numerous other mountains in the USA, India, and Europe.   I enjoy body boarding in the waves of Bali, Hawaii and California. In 1977 I became a certified PADI scuba diver and have dove in most of the world’s oceans. Competing in the 1992 Barcelona, 1996 Atlanta and 2000 Sydney Paralympics, I set four world records and captured half a dozen medals’.  The gal feels very small.