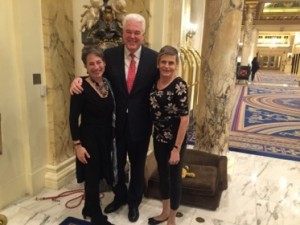 The lovely thing – or ONE of many lovely things – about near nonstop travel is returning somewhere to be re-united with a well-known luxury hotel and its people. It was two years since the last visit to Boston and everywhere the gal went she was treated to the proverbial fatted calf, although in reality veal never appeared on menus and if it had, it would have been fat-free (have YOU ever tried to buy full-fat, real and with-taste yoghurt in the USA?). Back at Fairmont Copley Plaza, Catie Copley, the resident Labrador ambassador, seemed to have gone on vacation as her kennel, outside the main entrance, and her bed, in the gorgeous gilded lobby were empty. But many of the 435 team members signalled their recognition, and not only big-boss Paul Tormey was on hand, but also his wife Pam, who wanted to share memories of their recent trip to Italy, especially Four Seasons Florence, which blew them away. 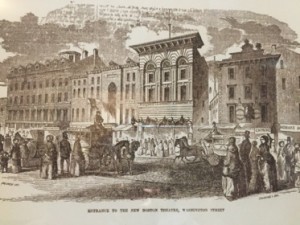 One of the many historic engravings shows Adams House, 1855

I love this hotel for its past. A Museum of Fine Arts stood here, before the building was put up, in 1912, and named for 18th century artist John Singleton Copley. Interestingly, the architect, Henry Janeway Hardenbergh, also designed the Willard InterContinental, in Washington DC, and The Plaza, New York – the latter is a Fairmont hotel, under Paul Tormey’s care. In the 1920s there was a Peacock Alley here, and many elegant tea dances. Richard Burton and Elizabeth Taylor honeymooned here, for their second wedding. In 1979 Viacom boss Sumner Redstone narrowly escaped a fire here by supposedly hanging on to a window ledge. In 1998 the hotel became part of National Trust Historic Hotels of America.  Walls are hung with historic engravings. 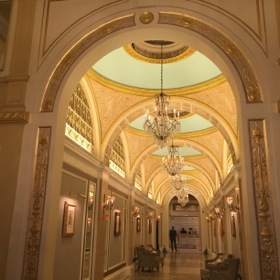 One of the hotel’s glorious, high-ceiling corridors

In 2010 the hotel was bought by Felcor and in 2012 it underwent a $20 million botox. Now everything glistens. Look at the ground floor corridors, from finely-tesselated marble floors up to soaring ceilings, with six amazing chandeliers hanging overhead as you progress from the St James Street entrance to front desk. Of the 383 rooms. favourites remain those that are themed, say 223, a Sports Museum treasure filled with Red Sox memorabilia, or 441, the Boston Pops, where the base of the lamp on the desk is a violin. Actually this time I really liked 433, first because it looked north over Copley Square, and half-left to Boston Public Library, but also because it is on the same floor as the large, friendly and well-stocked club lounge – and for exercise, it is 66 steps up to the 24/7 seventh floor gym. 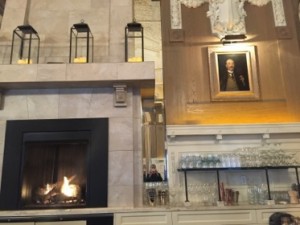 Corner of the Oak Room, with historic paintings and a modern open-grill kitchen

The fourth floor is also, for fitness fanatics who are, at least temporarily, averse to elevators, only 105 steps down to the Oak Room. This all-day space, with such high ceiling that it feels like a square, is bar and brasserie and restaurant and open kitchen all in one. As always I went for the steak frites, a great sirloin with parmesan fries and steak sauce. I started with local burrata with cranberry, grape chutney, arugula and spiced pumpkin seed, and I liked the way glasses of wine ordered from the by-the-glass listing on the back (Adults Only) of the simple brown paper one-sheet menu come as carafes, poured into your stemmed glass at table. As we toast friends in Pinot Noir Edna Valley Central Coast 2013, I hear the story of the concierge who won a week-long Tauck Tours holiday for getting a small labrador puppy for a terminally sick child, staying with his parents during medical treatment here in Boston. The boy was drawn to Catie Copley, and now he had his own canine friend. This is indeed a really caring, and beautifully comfortable, luxury hotel.