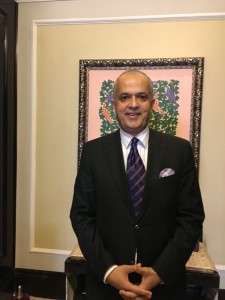 Sanjay Sood on his first morning

Oh what a treat it is to find a luxury hotel that has an all-day restaurant with several eating levels inside, and an overflow into a significant pedestrian-only shopping street, St George’s Mall – see the video below. This, above, is Mint, at Taj Cape Town. At breakfast it seems to be the early morning meeting place of choice for many parliamentarians on their way to Western Cape Province’s Parliament, literally just across Wale Street from the hotel (if you want to see chic local business ladies, here they are). Here, too, you might find Sanjay Sood, who started only yesterday as GM of this 176-room hotel. Yes, he is hot foot from Lusaka, and the gal was lucky enough to coincide with him on his inaugural day in a city he is already calling the most beautiful in the world. 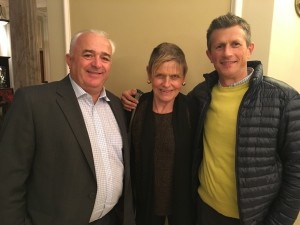 His predecessor, Michael Pownall, who opened the hotel in December 2009, also started work yesterday, as Managing Partner of PMR. He is the P. The M is based in Atlanta GA and runs lots of hotels in UK, including the portfolio that was once Norfolk Capital, headed many years ago by the son-in-law of the legendary Sir Max Joseph. The R is another renowned Cape Town hotelier, Tony Romer-Lee, and actually we all started the evening-before with a glass of Chardonnay here in beautiful Taj Cape Town before heading for a new Peruvian restaurant, Charango, about 200 yards away. Insider tip, like everywhere good in this foodie city, it is full. Reservations essential, as I found the other night, too, at Manna Epicure on Kloof, where I had one of the best ribeyes ever, at a grand cost of a mere Rand 195 – yes, work that out, it is under $13. 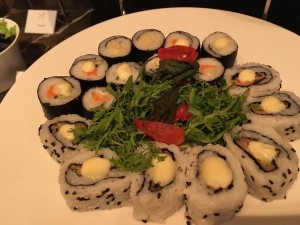 Breakfast sushi in the Taj Club

Of course we could have eaten at Taj Cape Town, where I have enjoyed dinners at Bombay Brasserie, sibling of its London original, and I adore the oysters and wine at The Twankey, on the street corner. Thirteen ‘heritage’ rooms at the hotel have access to the Taj Club, an executive lounge based on the long-established Taj Clubs at some Taj hotels in India. Here there is a good range of wines and Cape sparklings at cocktail hour, and the breakfast buffet is stylish, with sushi as well as more traditional offerings. It has actually been eating-and-drinking throughout my time in Cape Town. Even at the launch Forum of ILTM Africa this Monday they offered smoothies, in Champagne flutes, which I thought really elegant. 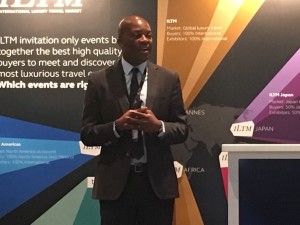 The keynote speaker was Justice (his first-name, not a legal title) Malala, an entrepreneurial media magnate who praised the advent of technology throughout Sub-Saharan Africa. It will mean more transparency, he promised: it is already allowing the two-thirds of African adults who do not have bank accounts to make payments via smartphones. He expects Nigeria to be the main powerhouse of the continent, and watch the rise of women, everywhere, in business, in politics and, as led by Chimamanda Ngozi Adichie, in the arts. Watch the rise of millionaires, forecast to grow from the current 170,000 continent-wide by a further 53% in ten years – which of course is great for luxury hotels.