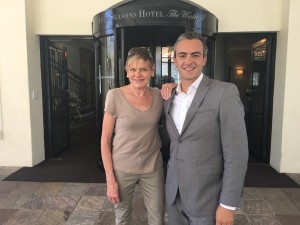 Since the gal was last at Four Seasons Hotel The Westcliff, Johannesburg, a lot has happened – and suave Frenchman David Barillot was on hand to explain. This man, a one-time KPMG accountant who got into luxury hotels when auditing Le Royal Monceau, Paris, is better than any concierge. He is a natural at selling the brands of South Africa, and Johannesburg, and his gorgeous 117-room hotel, unique in that it is really a village, with connecting houses up one side of a steep and really twisting cobbled street. It was he who, over dinner outside at the busy Flames restaurant, was raving about the city’s arts and crafts, and happenings. 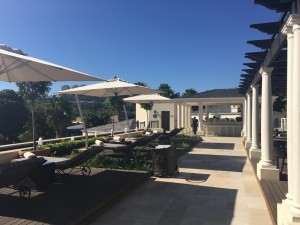 Why didn’t I go biking in Soweto, he asked? I had to explain there was not time this visit. I did check out the spa terrace, cleverly labelled ‘après-spa’. Atop the spa you can now rest, relax, have a cup of coffee or a glass of Chardonnay, which is actually what many Johannesburg residents do a lot of. Head for Flames’ lower terrace at five o’clock, for instance, and it is choc-full of local hipster business successes, including black diamonds who I suspect have moved over from another of Johannesburg’s prime hotels. That lower terrace is definitely meeting place for A-listers, and of course that brings hotel guests, too. 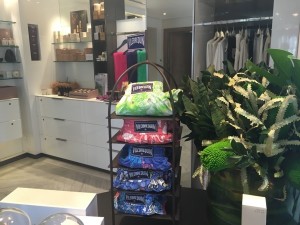 Corner of the spa shop

The nine-room spa, by the way, is absolutely beautiful, serene and inviting, and the products on offer include Biologique Récherché and Terres d’Afrique. Julanda Marais, who was in Geneva before, has created an ambience that makes you want to come in – look at the tempting selections in its retail section. The swimming pool, at the top of this page, runs along the rear of the spa (actually I am never quite sure if one should swim before or after a massage; I have done both). At right angles to the spa is the 24/7 Technogym, where I was able to work out, listen to the news and play on-screen games, simultaneously. Another innovation since my last visit is that bedroom toiletries are now a combination of Etro and L’Occitane. 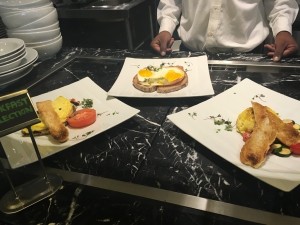 This is a luxury hotel where everything works, and everything is thought of. Room 431, in Maboneng House, has two balconies: I could go out and look over part of Africa’s largest urban forest, or at the hotel’s own manicured gardens. I had an electric towel rail, the biggest luxury boon for one-night-standers to dry essential laundry. Room 431 is a mere 20 steps down to the main corridor leading to both Flames and View, the fancier of the two dining venues which is now also the no-buffet breakfast venue. See the video below for a panorama from View, at breakfast. Aha, but they have also thought of those who want breakfast on-the-go, both hotel guests and also local business people stopping briefly on their morning commute. I loved the hotel’s Westcliff Deli, opened since my last visit, which had well-labelled filled buns and dressed rolls and, Japanese-style, models of dishes to-go (but unlike anything in Tokyo, these are real, not plastic facsimiles). Next time, breakfast in the Deli!