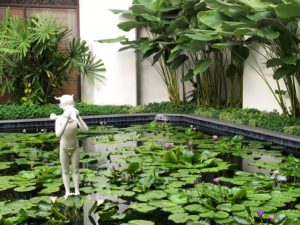 One of two front courtyards

Arriving back at what is now Anantara Siam Bangkok, the gal immediately feels at home. This is a building with stature.  It opened in 1982 as Peninsula, and three years later became Regent (who can forget stylish Clyde Min running this luxury hotel, then?). In 2003 it evolved to Four Seasons and its latest conversion, three years ago, has taken it home, as it were, to be run by its longtime owner Bill Heinecke’s own company, Anantara.  The building itself is unchanged.  The gal smiled when, having gone up four exterior steps from the kerbside, she was flanked by gorgeous lily-ponds, with china cherubs. Some rooms still look out directly across Rajadamri Road at Royal Bangkok Sports Club, with golf surrounded by the race track. 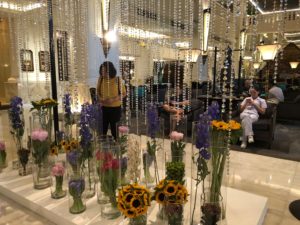 The tall oh-so-Peninsula lobby has its original Thai art on some walls and the ceiling but now there is a four-post bed of crystals and flowers in the centre. This is a perfect complement to the floral afternoon tea, set around a buffet that has bowls of orchids in myriad hues interspersed with one-bite goodies. I arrived on a Sunday and was amused to see that tea, starting at two p.m., was in full swing while only a few yards away brunch was continuing, until four.  Oh my goodness, WHAT a brunch this is (see two videos, below).  There are separate stations for every delicacy from foie gras through to home-made ice creams, via Arabic, Chinese, Indian, Japanese and of course Thai cuisines. 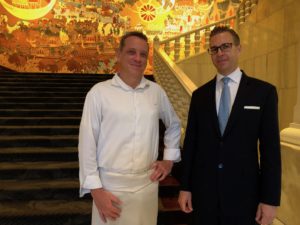 Food is taken extremely seriously here, and repeat visitors know to keep at least two dinners free.  Do not miss the current designer-steak promotion in Madison (try a 300-gram sirloin, aged in a glass cabinet right here, from Rangers Valley NSW, started by an immigrant draughtsman Oswald Bloxsome in 1838 – and with it, perhaps a glass of the family-owned Bogle Vineyards’ Pinot Noir, Clarksburg CA). Another must is Biscotti, Italian at its very best, with paper-thin focaccia ‘sandwich’ filled with four-cheese and black truffle. There are, of course, specials. Foodies everywhere are already arranging to be in Bangkok for the hotel’s S. Pellegrino World Gourmet Festival, September 3-9, 2018, which features 12 chefs with 16 Michelin stars between them.  The line-up, from San Francisco via France, Portugal, Switzerland, Italy and Singapore to Japan and Taiwan, interestingly includes an Indian, Srijith Gopinathan, from Taj Campton Place, San Francisco. 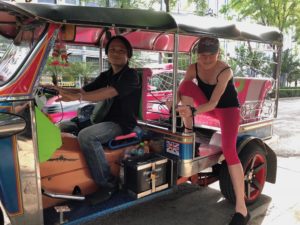 But it is not all eating and drinking at this lovely hotel.  I adored just hanging-out in 854, the Jim Thompson Explorer Suite – and when I went out, even into town or further afield in Thailand, I could take the Handy which is cleverly synced to work as a hotspot for my own device, which thus has WiFi capability anywhere, nation-wide.  I loved the outdoor pool, and the new LifeFitness in the gym. And a real highlight was the Qui Chong experience. This starts with the hotel’s six a.m. blessing. At 6.20, I was seen off by both South African hotel chef, Jan Van Dyk, and his German GM, Patrick Both. Concierge Kris took me a 15 minute walk to join thousands of others walking and jogging in Lumpini Park, heart of the city and established in the 1920s by King Rama VI (it is named after Buddha’s birthplace, Lumbini, sic, in Nepal). A French Qui Chong master, Nadia, led a 45-minute session, never stopping, Diaghilev meets IBM Watson – at the end I had metaphorical white air oozing along all my limbs. Next came a tuk-tuk ride back to the hotel, followed by the luxury of a relaxing hour-long balancing massage.  See why this hotel really understands the word ‘experiences’? NOW SEE THREE VIDEOS, ONE OF THE JIM THOMPSON SUITE, AND TWO OF THE STUPENDOUS SUNDAY BRUNCH