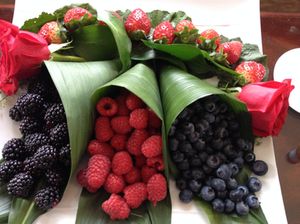 Eat blueberries for your heart, urges Dr Steven Pratt, author of SuperFoods: Fourteen Foods That Will Change Your Life. Any luxury hotel worth its metaphorical salt should make sure that berries, rather than cookies or homemade cakes, are among VIP welcomes.  This was the splendid selection of snacks that awaited the gal at the Westin Palace, back in Madrid after gallivanting around the Rioja countryside to visit another Starwood hotel, the Marques de Riscal. This cornucopia looked so good it was going to be kept as a pre-breakfast snack but, goodness gracious, the night maids were going to take it away. Thank heaven someone had put the ‘do not disturb’ sign out. 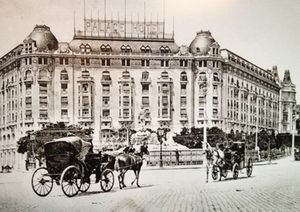 Frankly, that is my new norm.  It is just too time-consuming to say do NOT turn on the television, do NOT tidy papers, clothes or bathroom toiletries.  It saves my time, and the hotel money, to put out that sign.  This is one mammoth hotel.  It now has 468 rooms, but when it opened in 1912 it had 800.  Who on earth were all those people?  Our dear friend King Alfonso XIII, who had seen The Ritz Madrid open six years earlier, wanted something bigger.  He happened to meet a Belgian hotelier, Georges Marquet, racing at Deauville, and persuaded him to do a hotel here in Madrid.  Marquet bought the site of the former palace of the Duke of Medinaceli, and built this six-floor beauty. 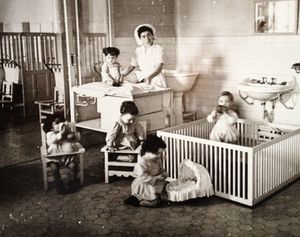 The history of the hotel is brilliantly illustrated in the fascinating 1912 Museo Bar.  There is a bronze bust of Georges Marquet, with his back to the main entrance of the bar so that as you go in you see the rear of someone’s head apparently sitting on one of the bar’s dark green sofas. There are photos galore, including one of the entire management team in the early days, and another showing King Alfonso XIII and his British wife, Victoria-Eugenie, who had sadly introduced haemophilia into the Spanish Royal Family. Alfonso was born king as his father was already dead: his mother, the Austrian Maria-Cristina, wanted him to marry a Hapsburg. Maria-Cristina ended up, however, with six little Anglo-Spanish grandchildren.  Did they, I wonder, ever play in the hotel’s own nursery? 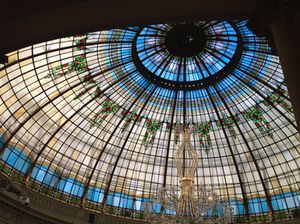 1912 Museo Bar also leads to the hotel’s amazing Rotonda dome, supported by ten pairs of classical columns about 20 feet high. This is where the hotel’s main activities are. All day and evening, people, including lots of locals, sit under the dome proper, having tea or martinis, and tapas, and listening to a tinkler on the grand piano. Leading off at one side is the Rotonda restaurant, which has a magnificently healthy breakfast buffet, with some of Steven Pratt’s other SuperFoods, yoghurt, for bones and heart; oranges, anti-stroke; and tea, anti-osteoporosis.  We dined there, à la carte. My meal was SuperFoods salad, with walnuts (anti cancer, diabetes and heart problems), and then salmon (heart-protective). 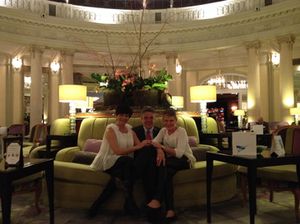 Alicia Ramoy and Marc Lannoy, in the Rotonda

I was with my good friends Marc Lannoy and his wife Alicia Romay, who are just about to move on after eight years at this lovely hotel.  Alicia is so talented. She is starting her own Alicia’s World radio show on COPE. She organises special events for Montblanc, and she publicises Reebok through her fitness blog – both eat all the right foods, both are Dr Pratt practitioners, and both take lots of exercise.  Love the gym here. It is 24/7, on the rooftop, next to the Chef’s Secret Garden, a delightful skyline-view hideaway surrounded by large pots of rosemary and other herbs.  The whole hotel has been brightened up, indeed, since my last visit. The Rotonda has new seating and carpets, as do the stairs down to the lobby. A Sushi-Taco eating place is opening any day now – there is already a leased-out Asian Gallery restaurant. 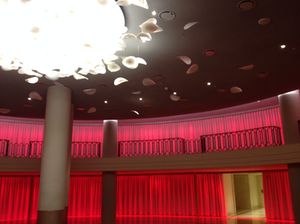 The most expensive enhancement, however, is the multi-million spend on turfing out the restaurant and shops that occupied two whole floors beneath the luxury hotel.  This whole area is now THE most amazing, and futuristic, meetings and events space.  Designed by The Rockwell Group, it is themed for water, in honour of the giant Neptune statue in the centre of Pl Canovas del Castillo, just to the east of the hotel.  Hold cocktails for two thousand here, or a big wedding, or a car launch (yes, there is an elevator big enough for your Bentley or Rolls to go down), and bring in your own caterers if you want.  Interesting, 20 percent of this mammoth investment was paid off in the first three months since its October 2013 launch.  Marc Lannoy is going out on a high.