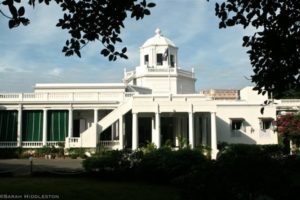 Old India is fast disappearing, and to some this is not entirely a bad thing. The tradition of networking clubs started nearly two hundred years ago has evolved. There are modern-day clubs, and such worldwide groups as YPO have strong branches here. Fortunately Chennai does still have its main establishment networking centre, The Madras Club, second only to The Bengal Club in age. Founded in 1832, it is now in its third home, the Mowbrays Cupola, built in 1792 by the then-Mayor of Madras, George Mowbrays. It has 14 letting rooms, thus competing not only with Airbnb but with the city’s luxury hotels, says the gal. 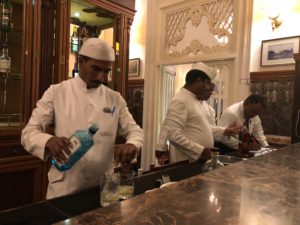 The cupola, after which the entire building is named, is the focal point of the interior, and today its floor is, as the photo above shows, decorated with sugar cane, symbol of the current Pongal harvest festival – some tuk-tuk cabs on the streets outside are sprouting so much sugar cane they look as if they might rise into the air, like big yellow and black drones, at any moment. The club’s seemingly endless reception rooms are separated one from the other by wood and glass doors. We go through to the bar, and sit up so I can watch the well-rehearsed pantomime as white-clad bar staff pour drinks, mostly the single malts that are the preferred tipple of India’s over-50s intelligensia. 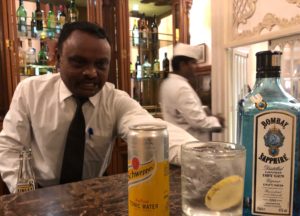 But what has happened to gin, which I always associated, through quinine and thus tonic, with India? Apparently it is coming back, but this still must be the only country in the world where minibars might have three whiskies and at least one vodka but you are lucky to find a gin (I am told there are two new craft gins, Greater Than London Dry Gin, and Hapusä). I merely ask for a gin and tonic and a brand new bottle of Bombay Sapphire is found, and carefully opened, and, bliss, the tonic is chilled, and Schweppes, and a request for ice results in plenty, not merely one lump. We go through to the 45-seat dining room, which has a dress code (though what?) for men, not for ladies. This is mature dining, with traditional fare brought by venerable all-male servers in all white, from forage caps down to shoes, via pyjama suits. 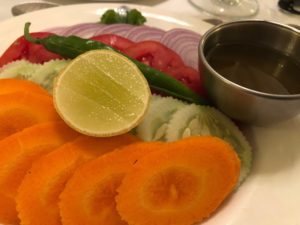 The menu offers mulligatawny soup, which apparently was invented here, taking the Tamil words for milligai, spicy, and thani, water, and it runs through to bread and butter pudding, but we never get that far. My starter ‘green salad’ is a one-off, as the photo shows. It was brought literally two minutes before my fish and chips, square pieces of anonymous white fish which reminded me of Friday lunches back at Marlborough College in England, the school that honed the skills of Kate Middleton, now Duchess of Cambridge, and Princesses Beatrice and Eugenie. Here, however, the chips were proper fries and I had a second plate, and I thought how lucky I was to experience this fleeting glimpse of days gone by, here in Chennai. And then it was time to head back to my current home, the luxury Taj Coromandel Chennai, which had produced such a magnificent really-green salad two nights ago. NOW SEE A VIDEO OF THE MADRAS CLUB RESTAURANT