The gal is always learning (who is not?).  Halekulani, the ‘house befitting heaven’, is a favourite luxury resort of so many discerning travellers.  There it sits, a couple of miles from downtown Honolulu, yet the warm Hawaiian ocean laps its idyllic sandy beach far from any care.

It was opened by Robert Lewers in 1907.  He called it Haw Tree then (next owners Juliet and Clifford Kimball renamed it).  Last time I was there I stayed in room 743, right at the far end of one block so I could open the shutters and look out at sand and sea, nothing else.

Calm and serenity go hand-in-hand to describe this gorgeous place.  It might have 455 rooms but you never feel surrounded by people.

The big boss, COO, of Halekulani Corporation is Peter Shaindlin, an erudite young man who trained with Rosewood and who has one of the two most expensive personal business cards I have ever seen.  The words Lotus Luxury Group stand out, in gold, protected by finest tissue….

Mr Shaindlin can, and does, discuss everything polysyllabic under and around the sun.  Now he has published a novella, Citizen Steele, which he will be talking about at R&D in Honolulu this very Thursday, March 29th, 2012, at 1800 hours. 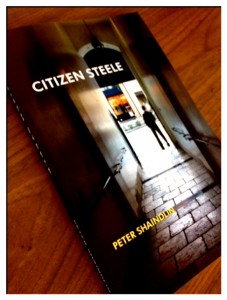 He is described, by the way, as ‘businessman, fine art photographer and author living in Honolulu’, nothing about his hotel life.  He will, apparently, discuss his experience as a writer/publisher and his protagonist’s philosophy. So, young man, what is this novella all about?

Turns out it is deep. ‘Adrift in a self-imposed emotional and spiritual oblivion, reclusive attorney Richard Jason Steele struggles through alarming personal and professional anxieties to isolate and define the roots of his lethargy by embracing yet ultimately rejecting the philosophical paradigms of the late Ludwig Wittgenstein, his one-time intellectual idol.

His aggressive and escalating deconstruction of the primeval philosopher’s magnum opus Tractatus-Logico Philosophicus parallels the collapse of his own legacy upon arrest for a violent crime that pits his own alternative ethical theories against the grim realities of his life under the sudden threat of execution.

Steele probes beyond metaphysical voids that only Houllebecq so far has stared head-on: “Not everything can be explained. There is thought and so there is reason, and so there is hope but inevitably, despair. An inanimate idea would be the perfect expression of infinity as a conscious state of mind, or more succinctly put, a parallax portal by which one could stop living momentarily in organic terms, perhaps long enough to exchange ideas with God”.   If you have not, like me, either read or had time to read Citizen Steele, at least you can now talk about it.

What would Citizen Steele think of CitizenM hotels?  They are not luxury but they are fun, and talk-about.  This week, by the way, fashion supremo Diane von Furstenberg talked about Taj’s Lake Palace Hotel in Udaipur (she was in Mumbai, at Taj Lands End, and went on to Rajasthan, with Christian Louboutin, for the annual Gangaur Festival, March 25-26, 2012, honouring goddess Gangaur, wife of Lord Shiva and symbol of purity). @DVF tweeted ‘Lake Palace in Udaipur could be the best hotel in the world love Diane’, which of course was picked up worldwide.

Taj Lake Palace, a Leading Hotel, was built in 1743 as a pleasure palace for Maharana Jagat Singh II, who used an existing rocky protrusion in the middle of Lake Pichola as base for what looks like a giant cruise ship.  Of course unless, and this is rare, there is no water, you arrive by a five minute water crossing, where you are met by a moustachioed guy holding an embroidered red umbrella.

You are escorted up 14 red-carpeted steps to the lobby. I loved room 116, Khush Mahal, one of two Queens’ Chambers, with an antique jhoola ceiling-hung swing, and stained-glass windows.  I loved the evening flautist who plays outside on the terrace overlooking the Jhankar courtyard.

Diane von Furstenberg knows what she is talking about.  The 1946-vintage Belgian-born designer, who dresses such style names as Kate Middleton (Duchess of Cambridge), Gwyneth Paltrow and Uma Thurman – and, apparently, Michelle Obama but would she really look good in a signature DvF wrap-dress? – lives partly in a hotel.

Her husband, Barry Diller, has a large suite at Rosewood’s The Carlyle in New York, where James McBride was GM for many years.  Diane was formerly married to a German prince, Egon von Furstenberg, but he seems to have been dispensed with.  She has also got rid of age association.   Look at her as she was a few years ago, look at her now, with even more character.

Wait until she has time to open the DvF eternal salon (other eternalists include forever-young Carmen Dell’Orifice, coming up to 81 and still, thanks to financial investment with a certain Bernie Madoff, working as a top fashion model, and, on the non-distaff side a lot of entertainers, Leonard Cohen, Englebert Humperdinck, Sir Cliff Richard,  Sir Tom Jones…. and then we have Karl Lagerfeld and Valentino, who both look far more than ages, whatever those are.

Looking at the new Tsutaya Books store in Daikanyama, the upmarket shopping district in Tokyo, evokes eternity.  The design is simply so beautiful it will look good in centuries to come.

It was deliberately designed, by Klein Dytham, as a ‘library in a forest’.  German-Italian Astrid Klein and Mark Dytham MBE, from the modern concrete maze of Milton Keynes that no heritage-seeking English person seems likely to visit, are based in Tokyo.

Their other designs include the distinctive all-white Sasao House in Shinjuku, a few minutes from the gorgeous Park Hyatt Tokyo, and the Sony building in Los Angeles.   As an example of how word-of-mouth counts, even today in the knitting-wool mélange that is facebook, linkedin, pinterest, twitter and weibo and their dreaded ilk, Japan’s hotel guru Sam Ohta introduced Ricco de Blank to Tsutaya Books.

Ricco de Blank runs SHKP Hotels, out of Hong Kong, and he told me about it. He also happened to be speaking at the hotel investment conference in Berlin and told another speaker, Tyler Brûlé, about it.  And HE happens to be not only boss of Monocle magazine but the Financial Times’ Saturday Fast Lane columnist. Last Saturday, March 24th, Fast Lane raved about Tsutaya Books…. word of mouth.