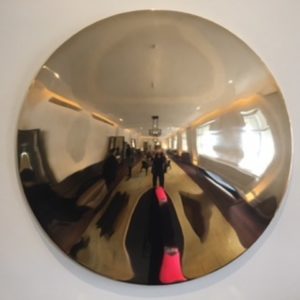 What was the reason for the gal to include Perth in her lightning Australia trip? Why go all the way, two time zones west of Melbourne and Sydney? The magnet was the country’s best new hotel AND, six months after its October 2015 opening, the overall-best hotel, old or new, according to Gourmet Traveller magazine. COMO The Treasury Perth is a 48-room conversion, by local architect-designer Kerry Hill, of three adjacent civic buildings, all dating from the last decade of the 19th century. See the frontage, above – in front is Ascalon, St George and the dragon by Marcus Canning and Christian de Vietri (St George’s Cathedral is immediately behind you as you face the hotel).  Now, as well as the hotel, the complex, 145 yards long in all, also includes magnificent public rooms with sensational Western Australia art, and restaurants, bars and highest-end retail, plus a four-room spa and a heated indoor pool. 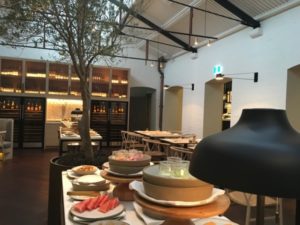 All bedrooms are different. I absolutely loved 26, a corner studio measuring 33 by 33 feet total, and soaring up to a two-level white clearstorey ceiling (the room itself is in soothing shades of off-white and palest, and mid, mushroom, with oodles of pale limed oak that is so satin smooth you just want to stroke it). Oh, and there are real leather covers, for kleenex and so on, and the locally-made mattress invokes instant sleep, and the light and blinds-curtain switches are big, easy to read and really simple to operate. This is a thoughtful, and art-filled, hotel. They, whoever they are, have worked out what guests want – what a pity Prince Charles, who officially opened it, could not stay over as he might have got a few ideas for the hostelry he is about to open on his Poundbury estate in Dorset, England. 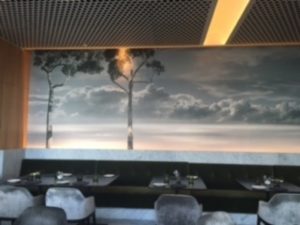 Dine in Wildflower, where wall photos, on PVC-free paper, are by Valerie Sparks, Melbourne

I have already mentioned retail. On the ground floor of this enormous complex you have a working flower shop, Aneura, named for an Outback tree – the florist is a lovely chatty lady, Angela Broad, who is generally accompanied by her big red poodle. There is a to-die-for couture room, by Aurelio Costarella, and you can buy gourmet hampers from Bianca Cloghan’s Ginger B, or have rare pink diamonds specially designed in Rohan Jewellery. Outside, leading off the main street, St George’s Terrace, you can take a few steps down to working boutiques, producing right here, chocolates by Sue Lewis, and perfumes and skincare from Katrina Snowden at Clean Slate, and more and more. I have also mentioned food. Highest category, literally, is the rooftop, glass-walled Wildflower – book far ahead, and wear black if you want truly to fit in (the female servers here, by the way, are in black Armani). 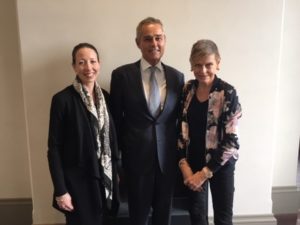 My dinner was perfection, chef Jed Gerrard’s blend of local + seasonal. I started with raw Shark Bay saucer scallops with sour grass, and green and red strawberries, and eucalyptus, and I went on to three bits of chicken cooked in truffle from Manjimup, which is now nearing France and Italy in truffle production – I was recommended first 2014 Cullen East Block Petit Verdot Malbec and then 2013 Xanadu Premium Cabernet Sauvignon Margaret River. But then, honestly, breakfast, in POST, the one-time mail sorting room, was pretty sensational too – music throughout the entire complex is admirably enhancing – as was, several hours later, lunch, in Precinct kitchen, where I saw looking up at industrial pipes deliberately exposed, and looking across at the black t-shirts and tattoos of the chefs. And somehow, in between all this eating and drinking, I toured Sterling Gardens, across the street, and St George’s Cathedral, across ten yards of slate walkway, and, next to it, the brand new and futuristic Perth Library, another Kerry Hill masterpiece. Yes, as developer Adrian Fini says, this is a hotel for the community. NOW SEE SOME OF THE PUBLIC SPACES THAT THE COMMUNITY ENJOYS, BELOW