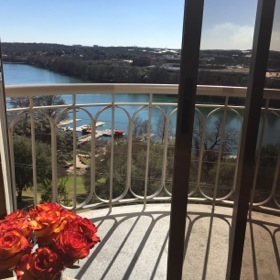 Absolutely the best luxury hotel in the capital of Texas if you want to feel at one with nature is the well-established Four Seasons Austin. Look at the view from the open French window of room 739 – the gal can go out on the balcony, breathe the lovely fresh air of a baking hot – low 80s – day, even in so-called winter, and look down at grass below and, only 200 yards in front, Lady Bird Lake, one of seven lake-like bulges in the Colorado River. Early morning and evening there are serious rowers out there, in double-sculls or coxed-fours. Day-long, there are tourists in rented paddle boats. 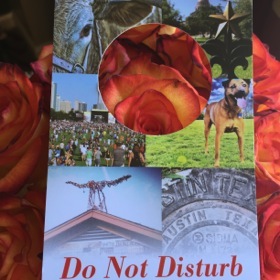 The fun ‘do not disturb’

Room 739 might have been here since the last century (just) but it has just been redone, in old-gold and soft-sage tones which are enlivened with fabulous orange roses with blood-orange tips. I also love the room collateral. See how they have made the ‘do not disturb‘ sign into something really charming – some other Four Seasons hotels merely give you a small white card that you stick into the outside of the door lock to say ‘do not come in’. I like originality, like the red silk tassels that Belmond Grand Hotel Europe, St Petersburg, and Taj palace hotels have, and this is certainly original. 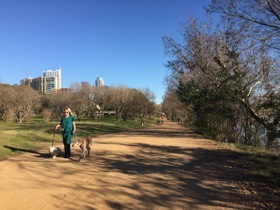 But no other Four Seasons hotels, however beautiful, have a location like this. I head down to the lower-lobby level, past the spa and the always-busy gym and out on to the grass. I start the Lady Bird Lake walk, a fabulous path that skirts the long north side of the lake and gives lots of opportunities for getting over to the south side via various bridges. Today, in the hot sun, there are others out, cycling, walking, running and pushing infants in buggies. The Four Seasons’ map recommends a five-mile circuit but I do an out-and-back, just over an hour total. Seems like a bit of a boot-camp – would love to return for the next Lucchese Boot Camps here at the hotel, work out, barbeque and, at the end of it all, you have a pair of boots, your choice of style, to take home. 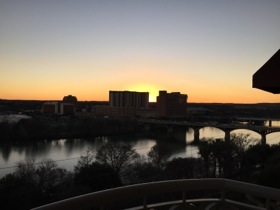 Sunset from my balcony

I just make it back for sunset, and head out to the balcony, thinking yet again what an advantage any luxury hotel has when its bedroom windows open, especially when the windows are French. What on earth IS a French window? These pairs of windows that open outwards, on vertical hinges, seem to have evolved from French doors, that were double doors with window panes in them and the window part grew and grew.. yes, GirlAhead learns something every day.