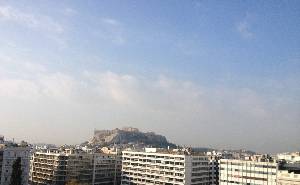 View of the Acropolis from room 614 of Athens' iconic GB

Well, guess where? International travel has taken GirlAhead to Athens, the place that many say is the cradle of civilization.

And to be there, right in the thick of it all, there is no better place than room 614 of the iconic Grande Bretagne, the Luxury Collection hotel that is generally known simply by its initials, GB.  The gal went out onto the terrace of 614 and looked slightly to her right, and there it was, the Acropolis, with the Parthenon on top. 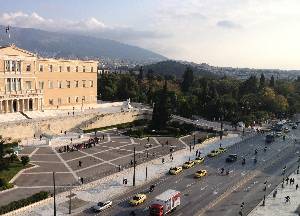 Look down to your left, to Parliament, with the Greek guards on sentry duty in front

Look straight down, and there is Syntagma Square, with its trees and grass bits and lots of people going about their everyday life.

Look to your left, and there is Parliament, with the sentries in front (the tall guys who wear short navy kilts over white tights, and black shoes with toe pompoms the size of oranges, and they walk almost in goose step).

I will be down there, tomorrow, to have a close-up look at the hourly changing of the guard.  Suite 614, for that is what it is, a lovely bedroom with an adjacent sitting salon, and, outside, the balcony big enough for four to dine, is surely the centre of the universe for those who want to soak up the atmosphere of Athens. 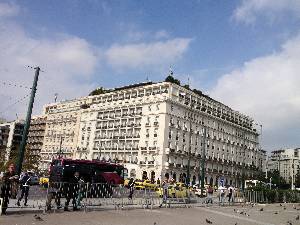 The GB has a roof garden, for year-round amazing-view eating

The GB started its life in 1842, when Antonis Dimitriou built a house, which he sold in 1874 to a former chef, Stathis Lampsa (the company that owns it now is called Lampsa Greek Hotels).

There is a splendid roof garden restaurant atop the eight-floor building, and an outdoor, summer-only pool.  The total 321 rooms and suites rise up to, well, Presidential and Royal Suites with private gyms and wine cellars – sample your Grand Crus as you jog, so to speak.

For me, 614 is just perfect, although even in its comparative compactness I had five closets. Generosity, in luxury terms, comes in many forms. 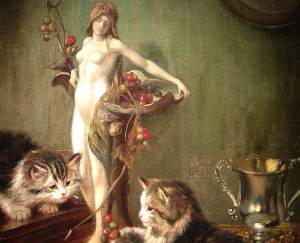 One of the hundreds of old artworks includes two playful kittens

The art throughout the entire area, including down in the basement (where you find another, year-round, pool, and a spa and a gym), must be amazingly valuable.  It is the opposite of the modern conceptual art of, say, The Grove, where I was yesterday.

This is antique style rather than garage-sale.  I love the painting of a lady playing a lute in 614 – she seems to accompany me as I write.

I love, down in the basement, the painting of two playful cats.  Everything is in immaculate condition.  I do not know, but I feel the hotel must employ its own French polisher.. 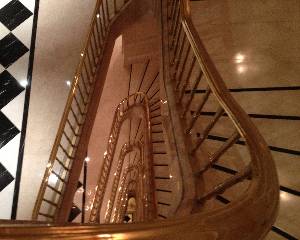 Of course there are elevators but gosh I do love hotels that have prominent staircases so guests can keep fit.  It was the late Queen Mother (the London-based one, not the former Greek Royal family) who is supposed to have said that every step you take up adds three seconds to your life.

And she lived to be nearly 102. From ground level to the sixth floor, it is 155 steps, ergo 465 seconds more to my life, times the number of trips I made, quite numerous.

All the better for all the eating and drinking I was doing, but that is for my next story. 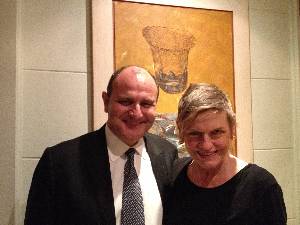 Tim Ananiadis, who runs this magnificent hotel – and all the Starwood properties in Greece and Cyprus – is himself from the Greek diaspora, brought up in Canada.

He just knew he was going to be a hotelier, no choice about it. And now he runs the best-known Greek hotel in the world.  More anon….