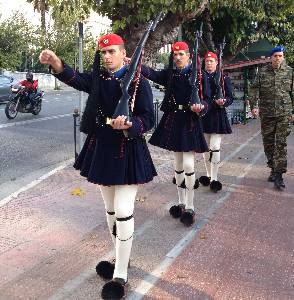 Presidential guards about to go on duty

When did you last pass three soldiers in skirts, right by you in the main street?  And soldiers goose-stepping, to boot? Perhaps Moscow but no, no skirts there. There is only one place in the world, Athens.

Yes, heading up Vas Sofias Avenue, from her Grande Bretagne (GB) luxury hotel base, the gal passed three Evzones.  This is a special 120-strong unit of the Hellenic Army, also known as Tsoliades. 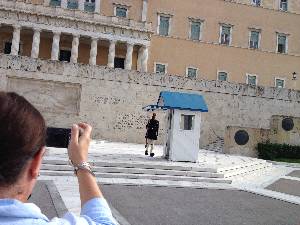 Guards do sentry duty an hour at a time, three times every 48-hour spell

Once, staying over a Saturday night in a side room of the GB, I was able to look down at the major weekly changing of the guard, at eleven every Sunday morning, with the entire unit and a marching band.

But there are mini changes every hour, on the hour, every day of the week. It is amazing how close you can get to the activities.  The three incoming guards, like the ones who passed me earlier, come on duty for their hour-long shift, three times in every 48 hours.

When they arrive, they are inspected by soldiers in normal combat gear who ‘dress’ them, combing their hats’ fringes.  Then they goose-step to position.  There are masses of onlookers, groups of school kids and tourists. 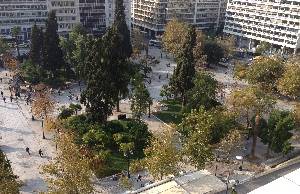 Looking down at beautiful Syntagma Square

Having watched that, I wandered around Syntagma (‘constitution’) Square, immediately to the west of the Evzones show.  It was named for the constitution that King Otto was forced to grant his people after an uprising – note the ‘an’ not ‘the’ – in 1843.

On most days, these days, the square is now calm, although television vans lurk in roads nearby just in case of yet another demonstration.  Pigeons, far too fat, waddle around.  I was impressed by how clean it all is.

There is not a single cigarette stub to be seen, and none of the litter of, say, central London.  I also, during my entire stay in Athens, saw not one single person begging.

In central London you cannot go half an hour without seeing someone with their hand out – try using the underpass, going under Hyde Park Corner from one luxury hotel to the other, from the Lanesborough to InterContinental London Hyde Park, and you feel as if you are going through a subterranean doss-house, hands held out ready for cash. 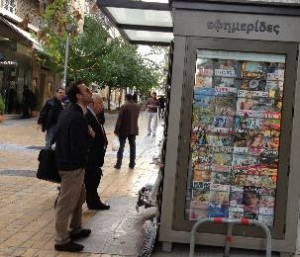 A typical newsstand, showing dozens of attractive and tempting covers

No, here in Athens pride prevails.  One dear friend says that, traditionally, Greeks would rather lose their sight than their reputation. They keep alert and up to date.

Newsstands dotted around Syntagma display more magazine titles than anywhere other than, say, Australia or South Africa, both countries that are addicted to colour publications (the Indians, by contrast, are addicted to hundreds of near-identical colourless daily newspapers, all white apart from the pink Economic Times).

Here they have everything, for anyone.  Even the GB has a splendid hotel magazine, on a par with that produced by another Starwood-managed hotel, the original St Regis, in New York, the hotel where the Bloody Mary was launched. 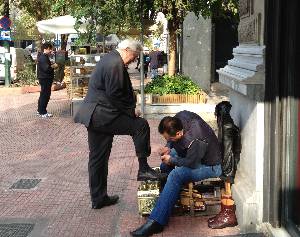 Fastidious shoe-cleaning is a way of everyday life

Greek men are fastidious about their shoes.  I met up with the Opposition spokesman on tourism, Nikos Syrmalemios of Syriza – he is Parliament Member for the Cyclades.

He was in open-necked shirt and cords, but his shoes were polished as mirrors.   Gossip, and political information, gets passed back and forth as a man stands having his shoes cleaned.

Feminists might object, but this is true – the same thing happens at the sit-up shoe-cleaning stations in New York, say in the Grand Central station concourse, or at Heathrow terminal five, or, managed by John Lobb, at Mandarin Oriental Hong Kong. 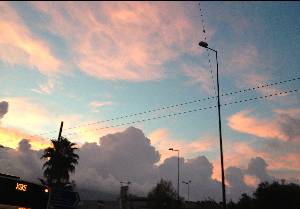 Sunrise start to yet another absolutely fabulous Athens day

But we are in Athens.  Look at the sunrise, where else do you see colours such as these?  And if you want more proof that we are in the Greek capital, the bus sign to the lower left of the photo is X95, the high-speed airport bus that runs every 15 minutes direct from Syntagma to the airport, about 40 minutes’ journey time.

Like all the buses in the centre of the city, the buses are brand-new, beautifully bright and immaculately clean, and not a whiff of exhaust fume in sight. Amazing.   Kill the world’s media.  Athens is a continuous surprise these days.