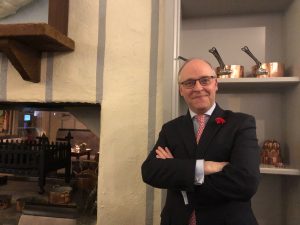 The Merrion Dublin partners with another Leading luxury hotel, a quintessentially rural resort, Ashford Castle, three hours’ drive west of Dublin near Cong, County Mayo. The gal was keen to see what Red Carnation’s owners, the Tollman family, had done since they bought the massive estate in 2013 (it is rumoured they have since spent €100 million on overall enhancements, including three million on accommodation for some of the 465-strong team, who are augmented by outsourced gardeners). At Ashford’s imposing mediaeval stone gateway, credentials are checked by a senior gent in a full length grass-green winter coat, and we proceed slowly along a twisting single-track road, with, as far as the eye can see, the same green just-mowed grass either side.  At the bottom of seven entry steps waits GM Niall Rochford, boss of this 83-room treasure, which claims heritage back to 1228, since when a myriad of owners have included the Guinness family.

I am escorted about 40 metres along twisting corridors – past a courtyard where ‘my’ bright green bike, with helmet, awaits – to #224, the Kennedy Suite (Ted K stayed here around 40 years ago).  Wow. I look through a trio of adjacent 4 metre-high cathedral-like windows, their shared cream drapes’ pelmet an elaborate tassel-decorated theatrical prop, and across to Lough Corrib, and snow-capped mountains of Connemara. I have a log-look working fire, electric towel rails and a 19th century walnut bed, its four twisting wood poles topped by cheery wood cherubim with waving arms. SEE MY GORGEOUS ROOM, AND THEN READ ON, BELOW: 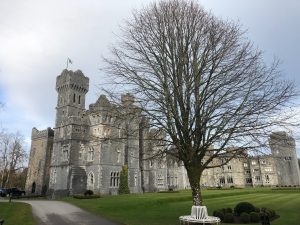 One of many castle views, in Winter

Time to explore. I start cycling some of the 141ha of wooded grounds – Ashford offers trips with former 2008 Olympian, David O’Loughlin. Paths, many tarmac, are thoughtfully well-maintained. At one point comes an enormous squawk in a tree high above: a falcon has landed. The falcon school is right nearby.  I pass 2 brand-new tennis courts, and a dog clean-up station (the hotel has a pair of gigantic Irish wolfhounds on daily call). I pass St Mary’s Church – the hotel restricts itself to two or three weddings a year.

I later saw such enhancements as a residents-only billiard room with smokers’ terrace, and a plush all-red 32 seat screening room, with daily free showings of John Wayne’s 1951 The Quiet Man, shot here, and two other movies, popcorn included. One of the ground-floor reception rooms is now a showcase for 1,200 pieces of Roebling-marked silver, the formal dining set of the engineer of New York’s Brooklyn Bridge, bought by the Tollmans at auction. The hotel has 13 places to eat and/or drink. Tonight, Cullens’, named for a former staff member, opens for the season. Once a cinema, it is now a cottage-like comfy space, all white with a fishing boat and nets hanging over.  We drink a Tollman wine, Bouchard Finlayson 2014 Walker Bay. I breakfast in the signature restaurant, the George V Dining Room. I look up at 12 multi-level early 20th century chandeliers, and down at plush multi-coloured Victorian carpeting. One buffet station has a giant china bento box, each compartment with a different home-made yoghurt or fruit: nearby are open-topped 200ml bottles of juices, and today’s smoothie, black berries. Another station has dozens of breads, all home-made. A la carte includes kippers, and farl (potato flatbread) with truffle sour cream and oil.

This is a place for de-stressing and privacy – recently, 10 adult girlfriends flew in for four nights, without going off-campus. General activities include golf, falconry, archery, sheepdog working, clay pigeon shooting, small cruises, walking those wolfhounds, tree climbing, ziplining, history tours, riding, fishing, boating, cycling+kayaking, tennis, paddle-boarding, off-road driving, biking and visiting resident artist Rick Lewis. And, as would be expected, there is a good gym, LifeFitness, and a superb spa, a haven of palest greys, and big white orchids. Softest music and skilled techniques while away the hour-long facial (unusually, Laura carefully explains why, for my skin, she chose Elemis rather than Natura Bissé or Voya). 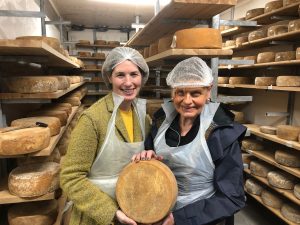 But now for Ashford Castle’s cream-on-the-cake.  A 30-ish local hotelier, Eoin Warner, working with, and exclusively for, Ashford Castle, has set up four different days of Irish experiences.  First, today, we head for a distant farm at the foothills of Slieve Aughty Mountains, Co Galway. A former cowshed has, with considerable thought – and money gained from selling 13 milking cows – been turned into Kylemore Farmhouse Cheese. A fourth generation dairy farmer’s daughter, Teresa Roche, returned from nursing in New Zealand, learned alpine cheese making in Switzerland and, four years later, she is turning out 1,000 cheese wheels a year. We toured production, and the maturation shed, and then made and ate raclette followed by Teresa’s mum’s Irish stew, lamb and veggie bits, and boiled potatoes.

Forty-five minutes later, we visited another shed-in-a-field, the workshop of veteran Uillean (Irish bagpipe) player Eugene Lambe – SEE HIM IN HIS WORKSHOP, ABOVE.  About 40 years ago, he could not find a maker so he started making his own. Now, with pipe-playing really back in Millennials’ sights, he is inundated with work: waitlist for pipes with elbow bellows is over a year (cost? €6,500, though Eugene can make a simple whistle for €450, with a 3D-printed mouthpiece). Such experiences, as I said, are exclusive to Ashford Castle. WATCH AND HEAR EUGENE LAMBE PLAYING A UILLEAN HE MADE