The aim of art is to represent not the outward appearance of things, but their inward significance, said Aristotle.  That grand old man’s words still apply today.  Life without art, says the gal, is superficial, meaningless.

A hotel without art lacks a certain amount of passion – by contrast think of the emotional (as well as financial) impact of art in such hotels as Bellagio, Las Vegas (collected by Steve Wynn) and Ritz-Carlton Millenia, Singapore (collected by Pontiac Land’s Kwee siblings).

Swissôtel The Bosphorus Istanbul, another Leading hotel, currently has 20 giant L-shaped sculptures around its public area.  Each arm of an L is about five feet.  Each L has been decorated suitably by such well-known local artists as Adem Gerç, Temür Köran, Irfan Okan.

The pieces, designed to celebrate the hotel’s third decade, were auctioned off for the ACEV icharity and until the new owners come to pick’em up they are suitably stored here. There is not much likelihood of anyone coming to pick anything up right now.

A brightly-coloured (proper-size) mug makes breakfast, with a personal bread basket, a bit of a picture

Heavy snow last week is now followed by relentless rain, which makes it all the more comfy and cosy actually to stay home, for that is what Swissôtel always offers.  Do not, by the way, expect cuckoo clocks and yodeling and edelweiss.  This is restrained Swissness. Doormen’s hats are flat-crowned, with wide brims that slightly upturn.

At breakfast, where breads include baked-on-the-spot croissants brought round on trays, for you to try, waiters wear loose white shirts with high-buttoned necks, which I am sure I have seen up the Matterhorn. Oh yes, one meeting room is the Matterhorn, another is Eiger, another Jungfrau and another is Mont Blanc.  You see these when you move from one block to another, to the wellness area or to Gaia restaurant.

The 497-room hotel, in two parallel 18-floor blocks joined by a low central area, stands at the top of a wooded hill directly above Taksim Square.  The gardens around include running and walking paths, a miniature zoo and, winter-long, a chandelier-lit ice skating rink with Swiss chalets offering warm sustenance. 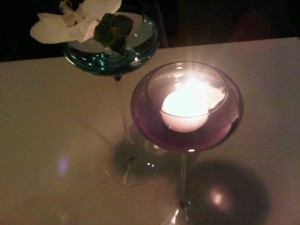 The dinner table at Gaia artistically has two long-stemmed glasses, one holding a nightlight, the other an orchid

The hotel was built in 1989 by Anadolu Japan Turizm AS, the Japanese construction company which also built the First Bridge over the Bosphorus, and it is now owned by former banker-turned-philanthropist Husnu Ozyegin.

When his daughter married, he asked that wedding presents be financial contributions to building housing for teachers at one of his many schools, and he is determined to make his own Ozyegin University the best hotel school in the country.

He wants everything to be the best.  Gerhard Struger, an honorary Turk since he has been here, as GM/RVP for Swissôtel throughout the region, showed me round one of the 63 Swissôtel Living residences, 100 yards from the main hotel.

They are gorgeous, designed by former Beijing-born musician Khuan Chew – after she graduated from the Royal College of Music in London she turned to the art of colour, and she now heads global company KCA.  I first came across her work at the iconic Burj al-Arab in Dubai, where she has used every bold colour under the sun ( ‘that is what the client wanted’ she is reputed to have said).

Her other works include Four Seasons Hong Kong, and Hiltons in Budapest, Durban, Jeddah and Makkah – not that the girl can see that one!  Here she has composed muted palettes of wood floors, mushroom lacquer, silver and steel, with stunning views from windows that are nearly floor-to-ceiling.

There is a meeting-room lounge for all the tenants, who can be for as long as one day/night through to forever.  Lovely, I would move in here were I to relocate. So, the best, everywhere.  This is a hotel with no fewer than three gyms, one standard Technogym, one for Pilates, one for Yoga, and there is a four-lane, 45-foot indoor pool, all managed by Bulent, also known as Mr Fitness, a former Turkish national tennis champion.

The adjacent lower-level spa has 14 rooms and the sexiest hammam this side of Christendom. Its lights change, say from fuchsia to turquoise and turn on any tap and the water comes out that colour, too.  It is ideal for single-sex birthday parties, or for stag or hen nights… And afterwards, spend a bit more, on the Van Cleef & Arpels store in the lobby or upstairs in Gaia restaurant, which is rooftop in summer but obviously, today, we ate inside.

Our dinner there was cooked by a Basque surfboard enthusiast, William Mahi. The table was a picture, the wine was gently poured into a Riedel duck-shaped carafe. Mahi sent out martini glasses each holding a sea scallop topped by a bit of cepe mushroom.

My mushroom soup arrived as a dry base of mushroom slices and fresh herbs in an oval deep-sided bowl: the irresistible 36-hour-cooked consommé was then poured in from a coffee pot.  The John Dory, on a bed of green cabbage, was topped with yellow carrots and foam.  As we left, I was given my actual menu, signed by the chef.

Photograph, on a hotel wall, of Istanbul's magical skyline

And the art extends right to the rooms of this luxury hotel.  In suite 1602 I was greeted by a display of five carafes in a silver ice bucket: there is a different herb, say mint, in each carafe, for flavour. This is complemented by litre-sized actual bottles of water, including the lovely fuchsia pink Corrèges bottle for Evian.

But the best art from 1602, and from any room at the south end of the building, is looking out at the Bosphorus, with the First Bridge to my left and the Golden Horn to my right.  In between flows memorable water traffic, back and forth to Asia, and left to right and vice versa between the Black Sea and the White Sea (also known as the Mediterranean).