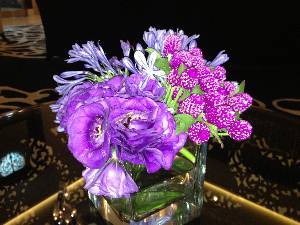 Oh what a difference flowers make anywhere.  At the luxury Cape Grace hotel in Cape Town, the florists’ wares stand on a cart outside the hotel entrance – buy a protea to take home, perhaps, or to give someone in the office.

A couple of blocks away from Four Seasons Hotel Buenos Aires, the flower girls perform miracles at an open flower studio in the subterranean art-gallery walkway from one block to another of Palacio Duhau – Park Hyatt Buenos Aires.

Here, at Four Seasons, the nosegays in the stunning new-look lobby are themed for the hotel’s 2013 colours, blue, for the flag of Argentina.  The gal thinks blue flowers look good. 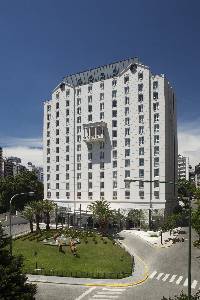 The owner of this 165-room hotel is spending US $40 million on giving it a new look, but the basic 1992 original, a 12-floor block, does not need anything doing to it.

At ground level he has added a glass-shelf porte cochere over the heads of bellmen (who wear the most delicious black and white co-respondent shoes).  I am not sure what the idea of a jutting out bit higher up is for – was it intended for presidential speeches?  Is Cristina supposed to get out there and deliver yet more words of warning about the Malvinas?

This (the Falklands, for us Brits) is a bit of a sore point right now as we were supposed to be sailing there but since D. Cameron, Prime Minister of the UK, named part of Antarctica for The Queen last week, a trip to the Falklands seems unlikely. 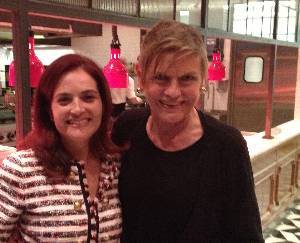 Politics should not come into luxury travel but sadly it does.  Everyone has difficulty getting visas for, well, Azerbaijan and North Korea – but some would say why do you want to go there?  Chinese need visas to come to Argentina, sadly, and they do want to come here.

Some are on business, managing Argentina’s exports of beef and soy beans back to China.  Others, on non-business, are heading down to Ushuaia and Antarctica to see and photograph penguins.  But here at the gorgeous Four Seasons Hotel Buenos Aires, run by the brilliant Rebeca Selley, there are no politics. 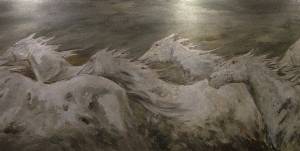 Horses gallop behind the front desk ...

She has personally lived and breathed every 18 months of the renovation, the first stage of which culminated in a grand party for 400, including the top movers and shakers of Buenos Aires, and polo players and the 50 outside members of the hotel’s gym and spa and pool.  She shows off the hotel’s new look as though she chose it, and did it, herself.

On the left wall as you enter the hotel’s lobby is a stunning painting, all in greys, of horses in full gallop.  It is by Alejandro Moy, who has also done silhouettes and paintings in the adjacent Pony Line bar, which designer WA International has themed as a stable-block-by-Gucci, complete with lots of leather straps. 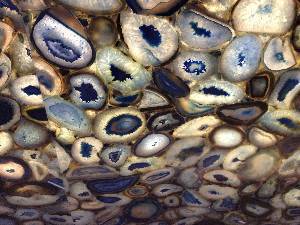 .. that is formed entirely of cross-cuts of blue agate

The reception desk in the main lobby must surely be unique – it is entirely formed of cross-cuts of bright blue agate, the kind of thing you see, in miniature, or in single stone form, in Brazilian stores, for you to buy and take home.

Here you have seas, oceans, of blue.  Stunning and gorgeous.  Overhead in the main lobby hang seven chandeliers, each formed of dozens of glass petals, falling from clear glass at the top down to bright blue, to match the agate.  Again, this is the blue not only of the national flag but the sky outside. 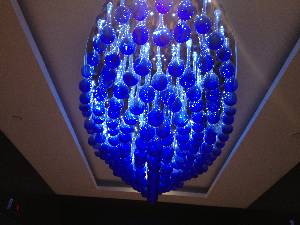 Chandelier in the elevator lobby

There is a different blue formation above the elevator lobby at the main, ground, floor.  While waiting for one of the four elevators to arrive, look up, above you.

Or look straight ahead, through a big glass window that shows you straight through to one of the luxury hotel’s ladies in red, hostesses in the most gorgeous fashion gear you can imagine.  Everywhere, here, oozes style.