Open your eyes and there is art all around. David Hockney’s sensational The Bigger Picture opens at London’s Royal Academy January 21st, 2012 (it closes April 9th, 2012).  Hockney is a Yorkshire boy, and he still has his northern accent, even though he lived in Los Angeles for about 30 years.

Today he is compared with Monet and Van Gogh and others who recorded landscape around them in the style of their times.  Hockney has spent the last four years working on this exhibition, which is HUGE.  Some pieces are 40 feet across.

He draws first on an iPad and then blows the result up enormously and, as he famously says, he does his own work.  This surely is a dig at the sensationalist Damien Hirst whose dead animals in formaldehyde are not only grotesque but will not stand the test of time.  The gal would invest in Hockney over Hirst, any time.

If you cannot get to London for this show, it goes on to Guggenheim Museum Bilbao (May 14 – September 30, 2012) and thence to Museum Ludwig Cologne, October 29, 2012 – February 4th, 2013.  But if you ARE in London during the next few months, thank your lucky stars that your timing is right.

Reports are coming out that during the dreaded Olympics some hotels are hiking their rates three times, but then at the same time one top hotel is still only 55 percent reserved.  Transport is going to be the main problem.  Olympic ‘people’, which is athletes and officials and cronies, are going to be given special speed-through road lanes, which will mean chaos for everyone else.  The gal will be away, far from London.

Fortunately some areas on the periphery of London should be able to operate undisturbed.  Take Abbey Road Studios, ten minutes’ walk from St John’s Wood tube in north-west London.  They opened 1931 as the world’s first purpose-built recording studios and those who have made sweet music here include the Beatles, plus Pink Floyd, the Hollies, Cliff Richard, Kate Bush, Oasis, Elbow, Florence and the Machine, Kasabian and Stereophonics. Now Abbey Road Studios’ owner, EMI, has signed an agreement with Fairmont, specifically for The Savoy.  Does this mean that the Studios will be decorated to look like the gorgeous Savoy, which reopened 2010 in its new Pierre Yves Rochon ‘attire’?  Does this mean that Savoy guests will be able to head to the Studios to try a little trill?  There are obviously lots of opportunities to link hotels with the art of music… 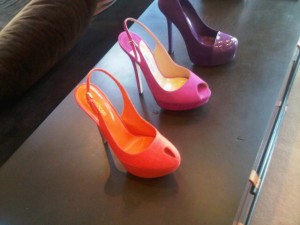 Trio of shoes at The Webster, Miami Beach

Art is not merely something that hangs on the wall.  At the famous Webster Hotel on Miami’s South Beach – the was-hotel that now-is a boutique shopping centre – a trio of shoes just says wow. Look at the hole in the front of the orange shoe. This original peep-hole should be copied.

Art can be sheer one-off design, of which Philippe Starck is a master.  He came up with clear plastic chairs (everywhere), and dayglo yellow chandeliers over spa reception that has a floor that is mostly water (Viceroy on Brickell, Miami). 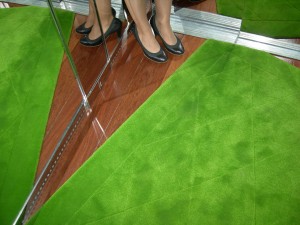 In Paris, at Fairmont Royal Monceau, he has put glassed-over maps of Paris atop the desks in all bedrooms – which also have real guitars (back to art of music).  Another nice touch is that the elevators have carpets that are deliberately set at angles.

Art that is three-dimensional always appeals.  In London, The Churchill (which is Hyatt) is partnering with the Saatchi Gallery and will have Martin Honert’s Reisen, showing two nine-foot giants, on display. 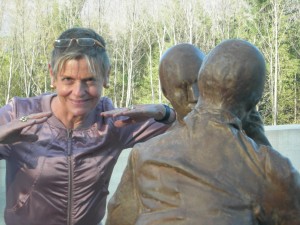 With friends at The Clark

Tony Chi is a master of incorporating anthropomorphic sculptures right into bedroom design, as at Park Hyatt Shanghai and SkyLofts, part of MGM Grand in Las Vegas.  Leading Hotels of the World held a meeting at The Wheatleigh, just outside Lenox MA.

This 1893 hotel, based on a 16th century Florentine palazzo, has gardens designed by Frederick Law Olmsted, also responsible for New York’s Central Park. But talking of gardens, while at The Wheatleigh head for the brilliant Sterling and Francine Clark Art Institute (generally known as The Clark) in Williamstown MA.   Loved watching the restoration and conservation work going on there. One of the exterior pieces is Juan Muñoz’s Conservation Piece, 1996. 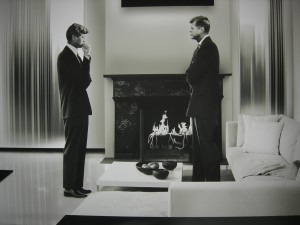 Finally, art, in the form of a photograph, on a wall. At La Mamounia in Marrakesh, a display of photos by Sacha (Sasha Van Dorssen) until until May 2nd, 2012. At  Sir Rocco Forte’s Villa Kennedy, the image Contemplation, showing two of the Kennedy brothers, becomes a lifetime memory.  This hotel, built in 1904 for a banker, Georg Speyer, is called after the street where it lives, Kennedyallee, renamed when JFK came to stay in 1962.

Is it true that all members of the Kennedy clan get free stays here?  And don’t we all increasingly love black-and-white: the current silent movie The Artist won three Golden Globes this week – Best Motion Picture, Musical or Comedy, Best Original Score and Best Actor Picture Musical or Comedy (for Jean Dujardin’s portrayal of silent film star George Valentin).  Sometimes ‘old’ is much better than high-tech…