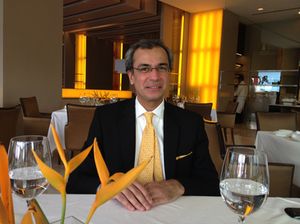 Devendra Bharma, at The Oberoi

Today’s theme is art in luxury hotels, kicking off with colour.  Here is the gal at lunch in Vetro in The Oberoi, Mumbai, and sitting across from her is the hotel boss, Devendra Bharma.  His tie matches his handkerchief, which in turn matches the flowers on the table and they in turn complement the room’s slightly psychedelic décor, done by Vinoc Goswami (we all joked and said if Bharma changed his tie he would have to sit elsewhere in the room, perhaps in front of deep burgundy glass). 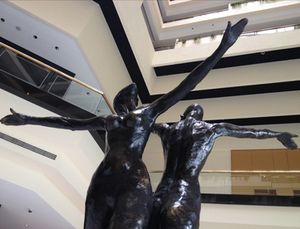 Dimpy Menon, at The Oberoi

There are two more classic artworks in the hotel’s lobby, like a big  gleaming iceskating rink where the ice has been replaced by shiny off-white marble.  One is a scarlet grand piano.  The other is a pair of dancers by Dimpy Menon, whose seated woman graces the presidential suite of this hotel’s sibling, The Oberoi, Delhi.  That Dimpy is easy to photograph. This one was impossible. The best I got was by lying on the floor and looking up (being Oberoi, obviously the floor was absolutely dust-free), but I had just had Alessandro Stefoni’s artistic caprese and a calzone with garlic and oil, not good fodder for squirming around in the horizontal. 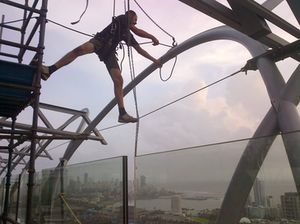 ‘Sculpture’ of an aerial worker above Four Seasoons

This German guy was squirming around up in the air, high above the 33-floor Four Seasons Mumbai.  Challenge? The hotel’s rooftop bar was incredibly popular with Mumbai’s high-achievers but everyone knows monsoon starts about June and runs through October.  The solution?  Commission a German company to design, make and install barrel-topped canopies that will withstand wind speeds of up to 185 kilometres an hour. The cost of $500,000, which includes air conditioning, was quickly recouped judging by a visit at seven o’clock on a Monday evening, when already there were about 50 up there.  Entry requires being over 21 and to be carrying a smartphone. The most popular drink seemed to be enormous blue fluffy confections, like candy floss, intended to be shared by four friends. 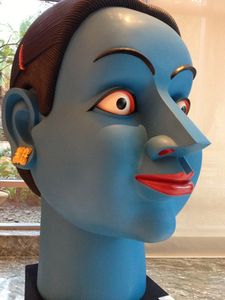 Talking of blue, this ten-foot head sits in the hotel’s lobby.  It is by G. Ravinder Reddy, and there is a quarter-size red head down the far end of the lobby, by Rohin Reddy. Both are part of the current art show, changed every three months by Apparoa Gallery of Chennai.  Pieces range over all public areas, including a stunning new Mansion all-purpose room that has a full working kitchen at one end.  This can be used to cook lunch at meetings, or for cooking lessons or demonstrations. As with that anti-monsoon cover, return on investment must be pretty good. 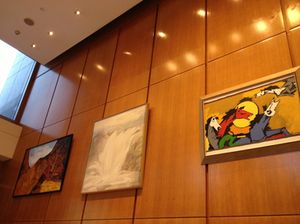 The M.F. Husain is to the right

Some of Apparoa’s wall art is hung quite high.  The piece on the right here is by Magbool Fida Husain, 1915-2011, usually known as M.F. Husain, the Indian-Qatari painter and film director often known as the Picasso of India. Amazing what one can learn by looking at things hung on walls. Indian art is being introduced in various places here at Four Seasons. Key cards, to open your room door, are in wallets showing collections of old keys. The guide to television channels is, in similar style, featuring a selection of old televisions, just like your grandmother had. 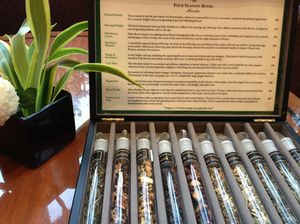 A ‘sculpture’ of phials of exotic teas

It is also amazing how much one can learn by generally keeping one’s eyes open in a luxury hotel.  I spy a box of phials on a low table.  These are teas, all different.  A charming girl comes up and says her favourite is the Mango and strawberry.  Some are pretty unique, like Rosehip and hibiscus, but there is also a Silver needle, which I learned about a couple of days ago. More education. We went up to the private rooftop club, 400 hundred members who pay an arm and a leg for the privilege. Most popular, apparently, are the small meeting rooms there where meals can also be served.  This is where real business is done, behind closed doors.  At that we head for the openness of the four-kitchen San-Qi, ‘three energies’, knowing we had to decide between Chinese, Indian, Japanese or Thai. Gosh life can be tough…