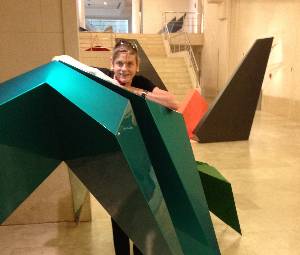 One of Ana Lizaso's hinged sculptures

Not many hotels are connected by subterranean passages. In Monte-Carlo you go underground to get from SBM’s top luxury hotels, the Hermitage and Hôtel de Paris, to the massive Les Thermes sporting club.

At Grand-Hôtel du Cap-Ferrat in St-Jean Cap-Ferrat (the massive palace that was so beautiful when Hans Maissen ran it – it is now owned by a powerful Russian, Leonard Blavatnik) you walk inside to get from the original 1909 palace to the new block.

In Singapore, B.S. Ong’s Four Seasons and Hilton hotels are joined by an interior corridor where there are sometimes exhibits. 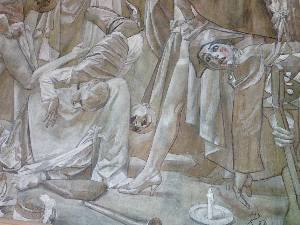 At Palacio Duhau – Park Hyatt Buenos Aires, a massive marble corridor that goes underneath the luscious garden to link the 1934 Palacio with the 2004-vintage new block. This becomes a perfect art gallery, says the gal.

Ana Lizaso’s gigantic laminated sculptures are showing in this gallery for two months (see her on YouTube).  The hotel is a permanent gallery, however, for many of the artworks collected by the property’s owner, Juan Scalesciani and his wife Martha. 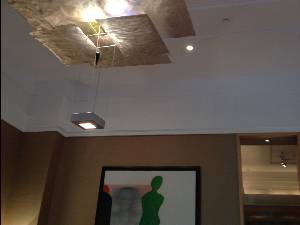 Gioia, wall painting and one of three ceiling-hung sculptures

At the back of the Palacio lobby, above a spiral stairwell leading down to the Duhau restaurant and on down to the spa, there is a grey-themed mass of humanity by Guillermo Roux, called La Ronda.  It is nearly eight feet high, and ten feet across.

The tall ceiling of Gioia Restaurant, in the new block, is the perfect support for three giant metal-paper sculpted chandeliers chosen by the Scalescianis and the hotel’s designer, Roberto Caparra of Entelman & Petrocchi Studio, here in Buenos Aires. 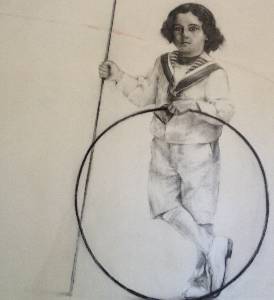 The sheets seem to change colour as the day progresses.  Buenos Aires is a city of art, indeed.  Its annual main festival, Arte BA, is next scheduled for May 24-27, 2013.

The total 165 bedrooms, a count that includes the 23 rooms in the Palacio itself, also feature memorable art.  I had not stayed in room 203, in the Palacio, for six years but when I walked in the other day I felt immediately at home. 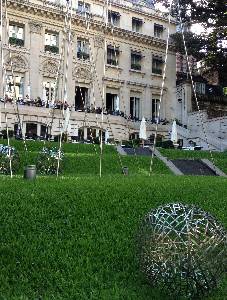 Some things change.  The 2012 Christmas decorations were done by Julio Perez Sanz, who has done permanent fittings around the inside of the hotel.

For this festive season he has put rudimentary outlines of Christmas trees in the garden, and some fretwork ‘snowballs’.

It requires a bit of imagination but you can see what he is trying to get at and anyway, apparently, real trees just do not survive in the summer heat that is Buenos Aires at Christmas (for those of you stuck in Scandinavia, sorry, here in Argentina it is light by five and it is sunbathing weather day-in and day-out). 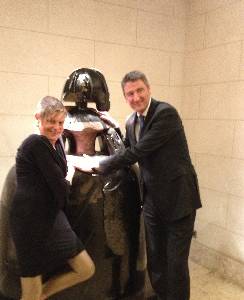 I was shown the art by the lovely Barcelona Boy, Antonio Alvarez, who runs this amazing luxury hotel. When we got to a heavy bronze statue, a more than lifesize likeness of the little princess in Las Meninas by Velasquez, we draped ourselves around it (sorry, ‘her’).

I had seen that 1656 painting in the Prado when I last stayed next door to that museum, at The Ritz Madrid.  Back to here, Buenos Aires, and, my thought for the day, surely, art is supposed to be part of everyday life?