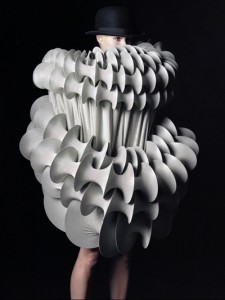 A girl loves artistic excitement – like lots of it. See what ANdAZ London Liverpool Street is up to these days.  For a start, during London Frieze Art Fair, October 13-16, 2011, ANdAZ has a pop-up Super Brand exhibition in its 1901 Wine Bar.

For ANdAZ’s London Frieze Art Fair, she promises something by Laura Keeble, who specialises in lifesize human statues placed in public places – how do mere mortals react?  I especially like, too, imagining what Simon Monk will produce. His latest theme appears to be Christmas stocking-type models in clear plastic bags.

During the London Restaurant Festival, October 3-17, 2011, ANdAZ’s chef Martin Scholz is hosting Seafood Workshops which include trips to Billingsgate Market to learn how to choose one fish from another (I remember my own visit to the market, far before dawn, and having the best-ever scrambled eggs and Bollinger in one of its many workers’ cafés).

ANdAZ London Liverpool Street, the first of Hyatt’s Andaz (sic) lifestyle brand, opened as such on January 1st, 2007 (the 267-room hotel is a brilliant reincarnation of the original 1864 Liverpool Street Hotel, and it is still connected, most conveniently, to busy Liverpool Street rail and subway stations). Once upon a time, like going back to the year 1247, the Bethlehem Hospital stood on this site.  It remains full of history: one of its two Masonic temples is now the gym!

Stylish Frenchman Arnaud de Saint-Exupéry is GM of a hotel that is very much part of the local community.  Busy young financial and other executives relax here in the typically-English St George pub, and the Champagne Bar, and I guess leisure travellers also appreciate the proximity to Shoreditch’s traditional areas, and the quick transport to the retail of Bond Street, Knightsbridge and Oxford Street.  I am thrilled that the hotel has switched to Limited Edition organic toiletries. I last stayed in front-facing 258, and the breakfast buffet, by the way, is as good as ever.