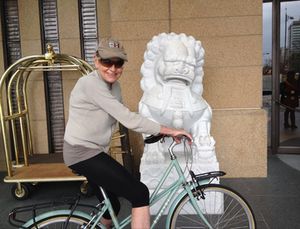 As GirlAhead readers know, the best thing after a long flight is get quick exercise – and here is another tip, when flying into Tokyo, choose the old, compact and friendly Haneda to the enormous and confusing Narita airport. Haneda has another advantage of being under half an hour’s drive from most central luxury hotels. This meant that 90 minutes after touching down at Haneda, the gal was out on one of the pale pistachio-coloured bikes at the exquisite Peninsula Tokyo. The bike was waiting by one of the two big white lion sculptures that flank the 24-floor hotel’s main entrance. They are obviously going to bring good luck for this Japanese stay. 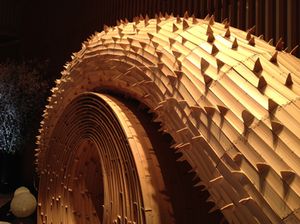 This is a hotel that is just so beautiful; nothing grates.  Put feng shui together with karma and a degree in aesthetics and you have the result, here. The two-floor lobby is soft woods, and soft red, and is a buzz, day and evening long, of people sitting, having breakfast through to afternoon tea and evening drinks – there are no reservations, but go to the back of the lobby and turn right and you see an omnipresent queue, a line of locals patiently standing up an oval staircase, waiting for a table. As everywhere, the lobby is filled with art. 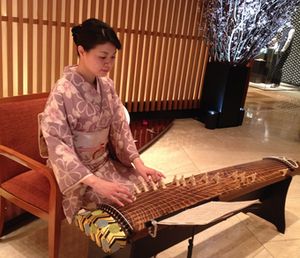 One of the most stunning pieces is this Lying Dragon Gate sculpture, at the back of the lobby. It is made by a bamboo artist, a woman named Keisen Hama – the hotel has 314 bedrooms and over 1,000 modern Japanese art pieces.  It also has living art in the form of a hoko, vertical lute, player, a lovely lady in a kimono sitting by the hoko, plucking deliciously so that the music wafts around the lobby. When her stint is over, pianists sitting in an upper gallery in one corner of the lobby take over (and when pianists are not up there, that gallery becomes a highly desirable exclusive table, for lunch, dinner or whatever). 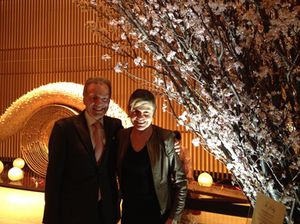 The lobby at the moment is filled with whole trees of early cherry blossom, brought from the south of Japan. Not surprisingly this attracts even more locals for, as in Washington DC, where the famous cherry trees were gifted by Japan, cherry blossom time signals the renewal of spring. The pale blossoms here in the lobby make everyone seem even more optimistic and happy, though admittedly the hotel’s theatrically-trained boss Malcolm Thompson says another herald of confidence is the forthcoming 2020 Olympics. The day of the announcement, everyone’s feet felt lighter. 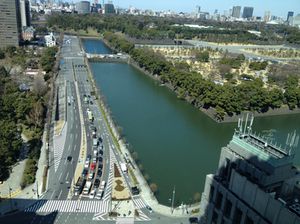 Looking down from 1919, at the Imperial Palace moat

That was the effect once I arrived at this fantastic luxury hotel. I looked down from room 1919, to Hibiya Park to the left and, straight ahead and to the right, the Imperial Palace and its moat and its enormous grounds.  That is where I cycled, around its five kilometre perimeter.  Me and the pale pistachio machine, up and around, sharing the pavement with runners and walkers wearing the gamut of cold-weather activity gear… A black bike would have looked terribly out of place. Now what did I mean about the fantasy of this hotel?