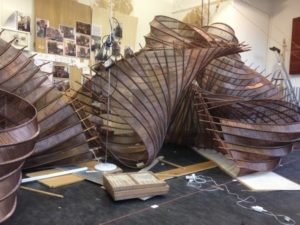 The luxury Park Hyatt Zurich hotel had a problem. Before it opened in 2004 its designer, Atlanta GA-based Jan Clausen, said she wanted a living wall of real bamboo between front desk and the lobby lounge. Ah ha, said Zurich’s fire brigade. No, we do not want that. So Ms Clausen, and the hotel, had to put up with artificial bamboos, and, says the gal, that was that, for 11 years, after which the hotel had had enough. With the full support of his owners, who conveniently happen to be Hyatt, GM Jan Peter van der Ree was able to announce a competition for a bespoke art piece. And also conveniently, the winner, against all global odds, happened to be Martina Vontobel, who is based in Zurich. 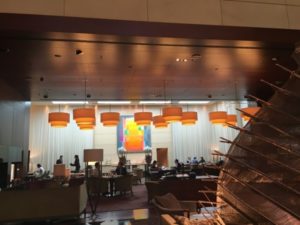 Looking past Network to the lobby lounge

Her piece, Network, is over seven feet long. It is formed of copper wires, painstakingly joined together one by one. The hotel owns all the rights and Jan Peter van der Ree gave it a ‘christening party’ this January. It now sits proudly in the hotel lobby, near Heinz Mack’s Lumière et Couleur colour block, on the rear wall as you look across, past Network, from front desk (Sol LeWitt’s massive 535 sq ft Irregular Wavy Colour Bands is up to your right, now). The art here is always having additions, sometimes temporary. Right now, some staff members – as in the upper photo, above – are wearing, through September 19th, 2016, what are called dress sleeves, ‘designed’, if you can call it that, by Franz Erhard Walther. This is part of Zurich’s biennial Manifesta 11, which this year, in oh-so-Swiss style, celebrates what is called ‘the relationship between art and labour’ – if YOU understand what that means, please let me know. 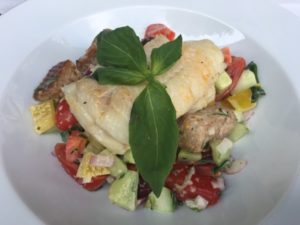 Haddock, or fish of the day

You have to hand it to Zurich’s promoters. There is always something going on, be it a street food fair or the like. This September Park Hyatt Zurich is joining with other luxury hotels in town to offer culinary stalls in a local department store, The hotel has its own gourmet club, a network of highest-level Swiss from all over the country, who meet regularly to share experiences of the finest things of life. Sometimes they travel abroad; their last sortie was to Nova Scotia for what sounds like lobster over-kill (no, says Jan Peter van der Ree, he could not spare the time to be on that excursion, which was led by his Executive Chef, Frank Widmer). 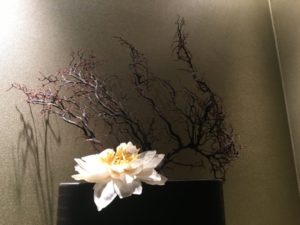 Art, or how to embellish a washroom

We were lunching outside, on the Beethovenstrasse pavement. It was baking hot, but there was a cool breeze. Fish of the day was haddock, I looked around and once again admired the outdoor art, in the form of striking light-and-dark wood table bases by Korean artist Jaehyo Lee. Afterwards, following my granny’s teaching, I headed for a washroom before starting a complicated train journey, and yes, there is even art in there, truly a sign of a real luxury hotel.