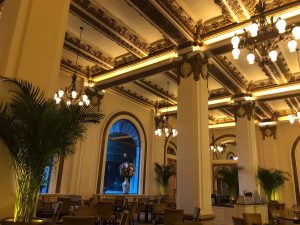 The lobby ceiling is a work of art

The Peninsula Hong Kong has long had associations with sensational art pieces; there was the time when the hotel had a truck strapped on to an external wall, all in the cause of art. More and more, says the gal, luxury properties realise that art attracts waves of comments, and photos that are ideal for social media (though the art-filled Mandrake Hotel in London has its most prized piece, an original Andy Warhol, closed off, invisible behind a wall, no good at all for social media).  When The Peninsula Hong Kong was substantially renovated in 2012, its glorious lobby, a 1928 sculpture in its own right, was meticulously restored, its cornice and column capitals a prime example of what wedding cake decorators try to emulate. 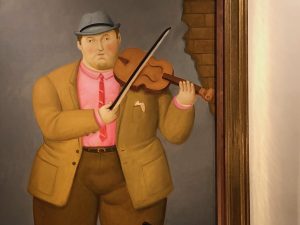 Botero in the lobby

Although the core building, a C-shaped structure on Salisbury Road, Kowloon, was finished 1928, the 28-floor rear tower was added 1994. The tower’s straight corridors are masterpieces of luxury, with thick carpets, walls bordered by heavily varnished vertical wood strips to prevent damage from wheelies and room service trolleys.  Semi-hidden along corridors, one per bedroom door, are cat-flap doors, for surreptitious delivery of newspapers and laundry to guests without disturbance.  The hotel today has 300 rooms and my own favourites are any -07 numbers, looking east and south, across Victoria Harbour to Hong Kong Island. 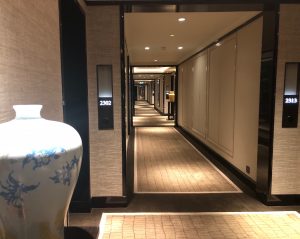 This is a hotel that for decades has understood personalisation.  They seem to know, without asking, what kind of fruits and juices are preferred, and if you once ask for a particular newspaper that is what you will get, daily, until you tell them otherwise.  They do not change too much, too often.  The classic Gaddi’s restaurant, for instance, has been here since 1953, and the menu still seems totally relevant (for the record, I started with beef and oyster terrine, with Kristal caviar, went on to spaghetti with white truffles, and a glass of The Peninsula’s own 2015 Pinot Noir).  But continuity is paired with bursts of excitement. 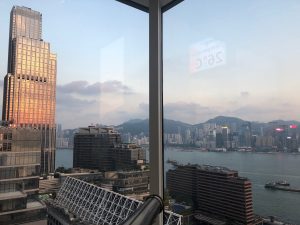 The luxury hotel is currently exhibiting Botero in a flamboyant manner. Outside the main entrance in Salisbury Road is an easily identifiable Botero anthropomorphic shape, providing suitable background for the hotel’s GM, Joseph Chong, and the equally brilliant Cecilia Lui, who somehow manages communications-and-more for both this hotel and its Shanghai sibling.  And inside the lobby, and up on the mezzanine floor, are dozens of Botero paintings.  I left looking at them to return up to my temporary home, #2307, for the best artwork of all, the view across to Hong Kong Island.