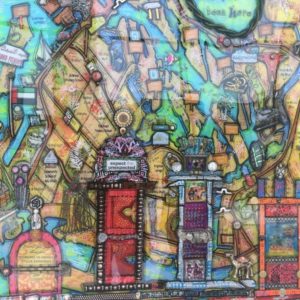 Fairmont Bab Al Bahr, Abu Dhabi, is one of those luxury hotels that has found a niche. Because it is half an hour from Abu Dhabi’s Corniche, and Kempinski Emirates Palace and other hotels, it is that much closer to Dubai, so it picks up Dubai-based expats who want to escape for a weekend away from the buzz and razzamataz that they have at home. Come to this hotel, the gal was told, and families and couples find more peace and calm and, always, great art and food. There is always an art show on. A favourite among the artists showing right now is Emily Gordon – see her stylised local scenes above, and to the left. 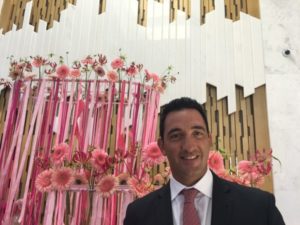 The 369-room hotel’s lively GM is Eddy Tannous, who has put in a new screen, and big flowers, o make the main lobby much more characterful. It does still have its chocolate gallery, a great delight to those with a sweet tooth. It also has a white BMW bike, yes right here, showing that, once again, Fairmont is a brand that believes in helping guests keep fit, and their bikes are always free. Eddy Tannous was actually studying Economics back home in Lebanon when he got a part-time job in a Marriott hotel and, he recalls, he was hooked, into the hotel world. He loves the creativity. At the back of his lobby is a big sign, No White Walls, which subtly guides you to the art on display. 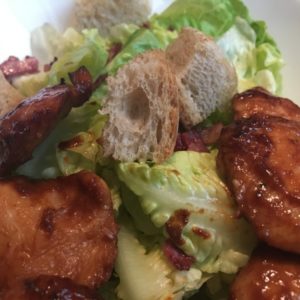 Next to the sign are 32 wide steps, a catwalk that leads down to restaurants. There is the dinner-only Marco Pierre White for steaks, there is lunch-and-dinner Frankie’s, for Frankie Dettori, which of course offers Italian (I had Frankie’s version of caprese, and then a Caesar, a perfect healthy lunch). Coming will be an Indian restaurant, and Café Sushi, both of which should be great hits. Eddy Tannous also says that the weekly Friday brunch is ‘better than ever’, somewhat difficult to imagine as last time I was there I thought it was one of the best I had ever seen. 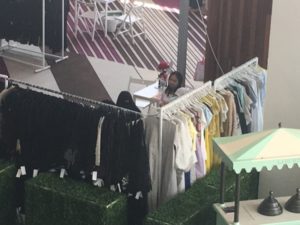 Looking down at a pop-up abaya and kaftan sale

Down at ground level, by the way, he is also hosting pop-up abaya fashion displays. Honestly, to me and I suspect a few others one abaya is just like any other full-length black robe worn by many Moslem women, but I need to learn more. Judging by the careful examination of the robes here by local ladies-who-lunch at this luxury hotel, fine nuances of stitching and other decoration, and the feel of the fabric, make all the difference. Apparently the wearing of abaya comes from Quran 33:59: ‘ O Prophet, tell your wives and daughters, and the believing women, to cover themselves with a loose garment. They will thus be recognised and no harm will come to them’. Once again, I learn something, and generally lots of things, every day.