Is this an 18th century Canaletto or 21st century reality? Believe it or not this is the view down to Mumbai’s 78-foot tall Gateway of India, built 1911 to commemorate the visit of the Royal Family, in the form of King George V and Queen Mary.  It was taken with the gal’s telephone from bedroom 651 of the Taj Mahal Palace…

Oh what an arrival at this iconic hotel, vintage 1903 so older than the Gateway.  The traffic around is one-way and somewhat chaotic at the best of times.  At weekends, with the hubbub and comings and goings of elaborate open-topped horse-drawn carriages taking tourists, most from all over India but some from overseas, on a carefully-set and surprisingly short route, it is more chaotic than ever. 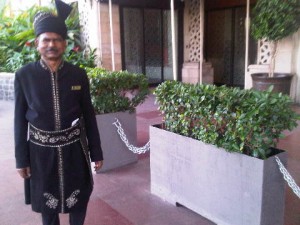 But the trusty driver nosed the Jaguar in, and at the bottom of the hotel’s steps a doorman waited, wearing black. The following day, somewhat surprisingly, he wore cream.

But the venerable lady that is this superb luxury Leading Hotel has constantly surprised.  She bounced back after the tragic happenings of November 2008, and she has been better, and younger, ever since.

As you walk through the lobby now it is a hubbub of people.  There are hotel guests, and local passers-by and tourists galore, and dozens of alert staff. The female employees are in exquisite saris specially woven in Sarai Mohana, a village Taj supports 14 miles from Varanasi. 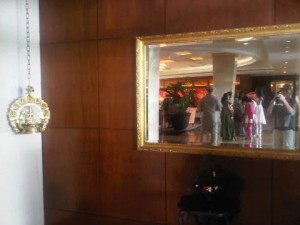 Lobby view - reflected in the mirror - of the iconic hotel

I went to visit a couple of years ago, and then was taken to a ceremonial Aarti on the river Ganges.  After that a venerable sage told my fortune.  I will be around for a ‘long time’, my ultra-lucky dates are 29 November 2013, 5 October 2014, 7 December 2015 and 18 July 2017 and the best colour for me is black, especially Saturday but not on a Sunday.

Anyway it is Saturday, and, wearing black, with a black and white jacket, I am escorted as if I am a queen, or perhaps wife of a president, through the crowds.  Looking into a mirror I see some of the locals reflected.

Up at 651, the Tata Suite,  I am shown around.  In the main bathroom, looking up into its tent-like mirrored ceiling, there are more reflections.  Now as it happens I had stayed in 651 on 18 February 2002, before the troubles.

It still has eight-seat dining, two bedrooms and one gym – when Tom Cruise stayed just before me, this time, he wanted the equipment moved out and more weights and stretch bands put in.  These days, the suite is a dance of light and brightness.

Some rooms have their tent-like ceilings formed of white-painted wood, others are papered with silver flowers on white.  Some rooms have small cantilevered balconies, just big enough for two to sit in close comfort.  All have windows that look down to the incredible view, of the crowds, the Gate and the Arabian Sea beyond.

Did Tom Cruise look out?  And what about those other guests, President Nicolas Sarkozy and his wife Carla Bruni?

One can be sure she worked out and possibly, like me, eschewed the elevator in favour of the classic staircase that winds its way around the giant six-floor open atrium that has always been a feature of the Taj Mahal Palace.  176 steps down, and 176 steps back, and you feel good, and the guard who opens the security door at the second floor gives a knowing smile.

One crazy person, he is saying to himself.  It is a funny thing staying in a place that has in the last few months not only welcomed a wellknown Christian Scientist and the self-styled saviour of the francophone world and his entertaining other half, but also no less a personage than President Obama.

A photo of him with Rajan Tata, soon to retire as Chairman of the mighty Tata Group, has pride of place in one of the museum vitrines in the main ground floor corridor. Tourists snap the pair while locals gaze in at the shops in this corridor mall.

There is Louis Vuitton, here is Ermenegildo Zegna, and Mont Blanc, and jewellery stores galore.  And yet, apparently, 80 percent of these stores’ considerable revenue comes not from in-shop sales but trunk sales at home.

Let us invent Mrs Kumar, wife of an international trader who happens to have an exquisite home in the Bhandup area of town.  She strikes up a professional relationship with the director of, say, the Taj’s Louis Vuitton store and invites her to bring some clothes over to her house one night.

On the way she passes the stone bust of the founder of the Taj Mahal Palace, Jamshedi Nusserwanji Tata, 1839-1904, a Zoroastrian and visionary who just lived to see the hotel, that he had commissioned six years before from architects W. Chambers and Sitaram Khanderao Vaidya, open.