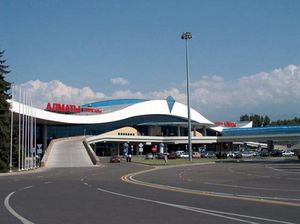 Here we are, in a new country, or new to the gal, who has come to look at luxury hotels in Almaty (yes, following Prince Harry, who came skiing here only last month). Now Kazakhstan can be added to the countries she has visited…  Here is a photo of the airport’s exterior as frankly no-one in their right mind would take anything inside the terminal.  After all the bother (and cost) of getting a tourist visa, to be turned away and not allowed in would be frustrating, to say the least.   Arrive, and this might happen to you. There are 12 immigration desks but only three operating, and very slowly.  A young man in a too-big green uniform and a big-topped, Soviet-type hat patrols louchly up and down past the three desks.  He is in charge. 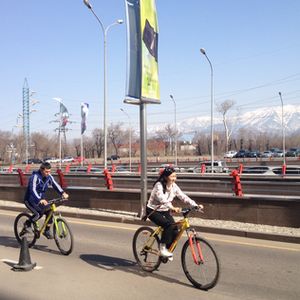 Suddenly he puts a cordon up in front of one desk so now we are down to two. About a dozen slim-line women in too-big green trouser suits arrive, kiss each other and after ten minutes one more desk is opened. Now we are up to three.  45 minutes in the immigration hall is nowhere near my all-time record (Miami and Rio hold that) but what a waste of time.  I was eager to get out to see and experience this marvellous city.  Almaty, previously known as Alma-Ata and Verniy, was the Kazakh capital until 1997, when government offices moved to Astana, but with a population of 1.4 million it is still the country’s largest and most vibrant city. 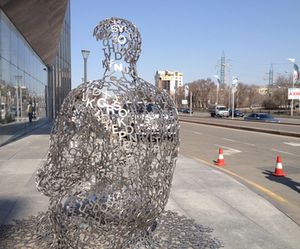 It is absolutely gorgeous.  I write this on the 26th floor of Ritz-Carlton Almaty, and I am looking over a sprawling, spread-out city to snow-capped Trans-Ili Alatau mountains. The sky is blue. Although it has cold winters it has warm, not hot, summers. I take a walk outside, along Al-Farabi Avenue, but I do not get very far.  Ten yards from the hotel is pavement sculpture, in the form of a ten-foot head of connected round circles of stainless steel and, close by, a divine Botero (memories of Four Seasons Miami and Waldorf-Astoria Grand Wailea). I take a photograph of the Botero: in the background, just the other side of Al-Farabi Avenue, are two ski jumps, with a few remnants of snow still on them. 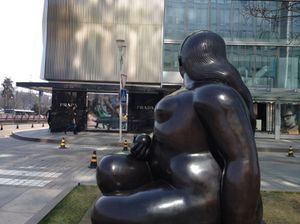 And ten yards on from Botero I am diverted by one of the entrances to the Esentai Mall, opened October 2012, with three floors of retail and, on top, a floor of food hall and IMEX cinema. If your retail brand is not here then you are nobody.  The main anchor is arguably the world’s most luxurious, if not perhaps the biggest, Saks Fifth Avenue, laid out to perfection.  Take the escalators from one floor to another and pass the displays of Diane von Furstenberg and Marchesa. Look at the shoe area, with Jimmy Choo, Christian Louboutin, Charlotte Olympia and others I have not heard of before. Did Prince Harry and his girlfriend Cressida Bonas go to the Mall when they were here, I wonder? 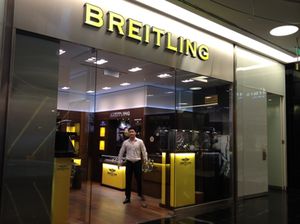 One of the many super stores in the Esentai Mall

But the mall also has stand-alone stores, with Breitling, and Porsche next to Porsche Design, and Ralph Lauren, and the French deli, Paul.  If you want it, it is here, and displayed brilliantly.  I am sure the three daughters of President Nursultan Nazarbayev, Dariga, Dinara and Aliva – all described as ‘businesswomen’ – must shop here (actually there are more people shopping, as opposed to just practising voyeurism, than you see in top department stores in the USA). Dinara is the daughter married to Timur Kulibayev, who is said to control 90 percent of Kazakh oil fields, and he it was who is rumoured, via an offshore trust based in BVI, to have paid £15 million, £3 million above the asking price, for Prince Andrew’s version of Dallas’ Southfork, Sunninghill Park. 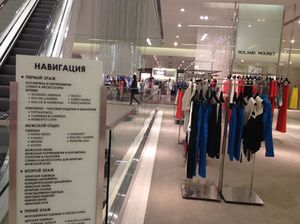 Signs in the amazing three-floor Saks are bilingual

In fact, according to Forbes the wealthiest Kazakh is metals magnate Vladimir Kim, worth only about $2.3 billion, but pushing him hard, at $2.2 billion, is Bulat Utemyratov, who cleverly does not put all his eggs in one basket as he balances metals with banks, investment, media and telecoms. Timur Kulibaev is a mere fourth in the list, at $1.3 billion. There are some fascinating people in the rich-list, including a 38-year old woman, Aygul Nurieva, who amassed her $780 million through stocks and telecommunications – and tenth in the list is Eugene Feld ($750 million), who does not sound very Kazakh but he used to manage Almaty Airport.   All these must be target customers for the gorgeous Esentai Mall, and for the luxury Ritz-Carlton Almaty hotel right next door, in the massive 37-floor Esentai Tower (the Esentai River is next to it) ….