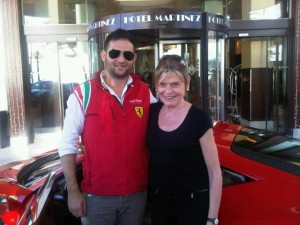 Arrival at the Martinez, with Daniele and his Ferrari 458 Italia

Oh what a way to arrive at the Martinez, Cannes – and the bright sun helped, too.  The gal was driven in a Ferrari 458 Italia (and having seen one in the Berkeley’s Atelier in London a few days ago, we know how much THIS one costs).

Daniele Bertini, from Red Travel in Turin, says this only goes 130 km on a tank, makes running it much more expensive than, say, cycling, but pedaling from Turin would have taken him a lot of time.

It would be impossible for me to cycle with my wheelie along, too. Even just coming from Nice airport to Cannes I revelled in the drive, though we got lost once getting on to the autoroute. 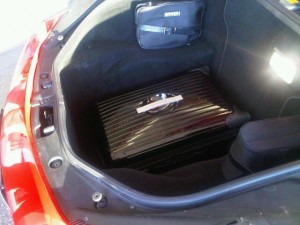 Daniele put on the GPS and a soft English voice purred the instructions.  He says all satnavs are available in English, even in Italian cars…. he also says that Red Travel, which does escorted luxury-car trips around Italy (carting baggage in a support vehicle) prefers a man-woman couple as two men travelling invariably want to show off their driving skills, which could adversely affect the car.

Red Travel belongs to publicist-publisher Andrea Levy, who has produced a glorious book Red Travel: Toscana in Ferrari.  Great for a guy, or girl, for Christmas. 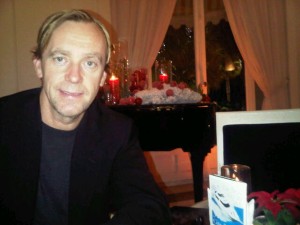 Philippe Kjellgren, at The Carlton Bar, could not stop raving about Art Basel Miami...

Actually there was plenty of space for my wheelie, in the front ‘boot’ of the car.   Here in Cannes it is luxury travel work, also known as luxury travel week, ILTM (it stands for International Luxury Travel Market). Here you find over 3,000 hoteliers, airline supremos, you name it, and every travel agent under the sun.

My good friend Philippe Kjellgren, President/CEO of Kiwi Collection, arrived via Swissair from Miami.  He could not stop talking about his visit to Art Basel Miami, where he hobnobbed with every rapper you can think of (and dozens more I had never heard of).  At one party he went to the entertainer was Elew (Eric Robert Lewis), a crossover jazz pianist whom all rappers and one Obama think is great. 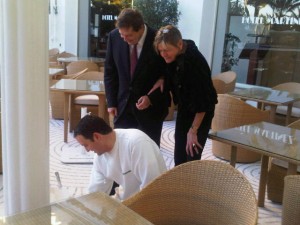 ..where he heard Elew play

The Martinez is used to crowds. The film festival is every May.  And last month’s G20 saw heads of industry staying at this luxury hotel, with a surprising lot of Koreans, apparently.  Not as a result of previous guests, the ground floor outdoor terrace is still being repaired.  I went to inspect.