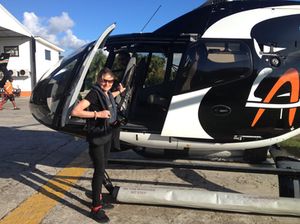 There is nothing like arriving in style. So here is the gal, at Mahe International Airport, about to set sail, or rather fly away, to Fregate Island Private, site of one of the ultimate luxury resorts anywhere. It is now managed by the marvellous Oetker Collection (yes, same people run the lovely L’Apogée in Courchevel, and Le Bristol, Paris and Brenner’s Park in Baden-Baden). Now they are also managing an Indian Ocean resort, and not only any old resort but Fregate Island, the 219-hectare island that is 55km east of Mahe.   The Zil Air EADS Eurocopter flew over the blue blue sea, and then in the distance appeared this long but tiny island, surrounded by white surf. 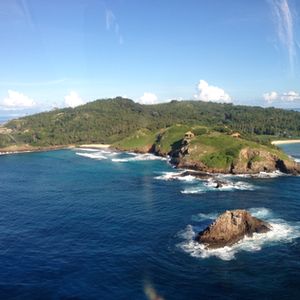 Coming in to Fregate Island

We circled around it, swooping quite low over the owner’s cottage, a hamlet separate from the 16-villa resort – when he or his family are here they can be completely separate. Then we dropped down to land at one end of the grass runway, long enough for a Twin Otter prop plane. A few yards away was a three-foot-long tortoise, probably 125 years old and weighing about 350kg. He was ‘galloping’ across the runway the other day just as one of the props wanted to land so, quick thinking of course, some of the guys around rushed to a forklift truck to get him out of the way. 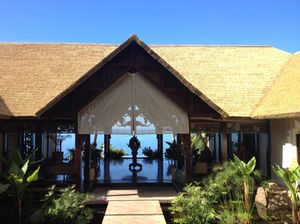 Why do people come to Fregate, which those lucky enough to be living here call Frig-it? They come for honeymoons, and solitude, and re-connecting with their other halves, and for being truly at one with nature. When I arrived I was immediately taken to my villa, and after quickly unpacking took a buggy down to the main restaurant – yes, dear reader, The Gal In A Buggy. This resort is like a roller-coaster. I later borrowed a bike but quickly gave it back as going down any incline was sheer suicide and trying to go up was impossible, even for Bradley Wiggins. 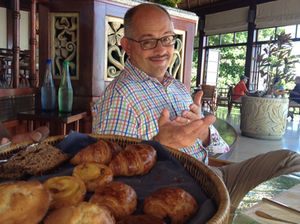 Back down, thanks to the buggy, at the main restaurant I joined Wayne Kafcsak for a late breakfast. After nearly two decades running many of the best small resorts in the Caribbean, which included Raffles Canouan, he and his wife Sally, a former banker, are thrilled to be here in the Indian Ocean. It is a change, and it is also brings them closer to their two sons, who are both addicts of southern Africa. This is an all-inclusive resort, with some good wines and spirits thrown in although you can opt to pay for others. Part of the inclusion is the dining philosophy, anything, anywhere, any time. This was, sadly, to be my only restaurant meal. We looked far out over the blue sea, and were already reminiscing about mutual friends. 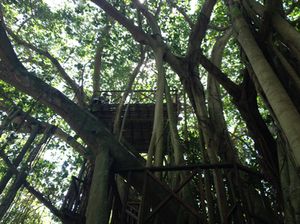 Lunch up in this treehouse

Let us test the anything-anywhere-any time suggestions. I was invited to lunch by the two head scientists, Zane, from Cape Town, and Tanya, from Swansea. They head a team of 16 who look after the ‘grounds’, which means undergrowth and dense forest, and they monitor all the flora, fauna and wildlife, none of which, I am assured, is dangerous (question, what would happen if a tortoise fell on top of you?). We climbed 66 wood steps up and around a century-old banyan tree, to a dining platform with a pulley for our food to arrive. As a result of the island now being rat-free, said Zane, rare magpie robins have now returned. I saw one creature unique to the island, the strong-clawed Fregate beetle, but not a Fregate snail. 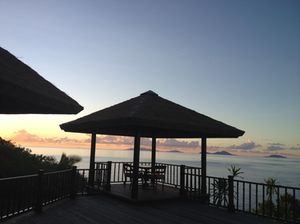 Sunset over my deck

Later, working out in the good gym and looking through all-glass windows into the undergrowth, I saw lots of enormous, two- foot-wide bats swirling around – Zane and his team offer kids the chance to go on night-time creepy-crawly tours, which includes learning about bats and their habits (he is also turning the current kids’ club, which will move to a new site down by the landing strip, into an ecology studio, that will similarly fascinate adults). As the sun set, I was all dressed up, or down, for dinner on the beach. Our directors’ chairs sank slowly into the pristine sand. One or two crabs scuttled around. Big log flares provided ample light as Wayne, Sally and I drank the health of friends, ate our just-caught fish and salad, and agreed how incredibly lucky they are to be working, and me staying, at this unique luxury resort.