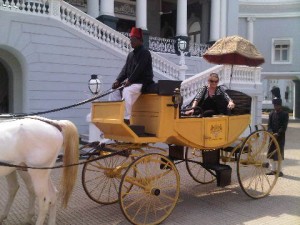 The gal is in for a treat of a lifetime. She flies into Hyderabad to overnight at Taj’s newest, and most opulent, luxury hotel, Falaknuma Palace, ‘Star of Heaven’.

From the airport it is about a 35 minute Jaguar glide through the hustle and bustle of this enormous city. Suddenly all is calm.

You drive up through a 32-acre rock-and-scrub hillside, Koh-i-Tur Hill, to an elaborate white neoclassical gatehouse.  In the past, musicians played in the room over the opening.  Drums and shenais (like oboes) greeted one. But this one was amazed, silence notwithstanding.

The trusty companion arrives in style, in a reconstituted 19th century carriage

Through the gatehouse, a carriage awaited.  General Manager Ranjit Phillipose, who was onsite for about three years before the palace opened as a 60-suite super-luxury hotel in late 2010, found masses of bits of old carriages and put them together, to form this beauty.

We, yours truly and the trusty Rimowa, jig-jogged up a 500-yard  twisting cobbled approach to the main palace, three imposing floors high at this point, now painted grey with white highlights. It took ten years to build before it was opened in 1894.

As one steps down out of the carriage at the Falaknuma Palace luxury hotel , a butler offers drinks

British architect William Mard Marret, 1840-1904, designed it in the shape of a scorpion, his lucky birth sign. He brought along a lot of his favourite artefacts: original metalwork throughout the palace, for instance, came from Glasgow craftsman Walter Macfarlane.

At the base of the palace steps, a butler stood with welcome drinks.  How would Viqar ul Omra, a Hyderabadi nobleman who commissioned this place, feel were he to see it now?

You are to follow a uniformed escort, with historic orb-topped stave, up the arrival steps

Some say he good-heartedly gave the palace to his brother-in-law, Mir Mahbub Ali Khan Asaf Jah, 6th Nizam of Hyderabad – others say he ran out of money.   It was then owned by successive Nizams and at one point it was a royal guest house.

One of the Nizams’ golden orbs is now used to welcome guests.  Get out of the carriage and, fortified by one of the glasses that the butler has offered, you climb up 34 wide stone steps to the palace doorway, escorted by a bearer holding the orb exactly at vertical stance. 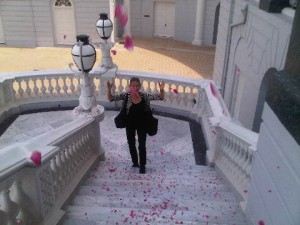 As you walk up the steps, a rain of fresh rose petals flutters down

But oh, what a surprise.  As you nearly reach the top a rain of real rose petals flutters down, presumably scattered by an unseen minion up on the roof somewhere.

You dare not open your mouth to laugh in case you swallow a petal. The team here is full of surprises (I certainly did not expect to get excellent WiFi throughout all areas of the sprawling whole). 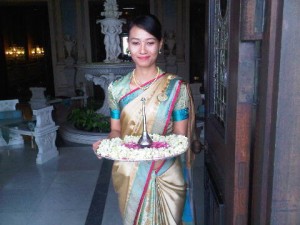 At the top of the stairs I am greeted, in the ubiquitous style of every luxury hotel in India, by a beautiful sari-clad woman bearing rose water and vermilion, to dot a bindi on my forehead.  A wreath of jasmine is placed around my neck.

Inside I face a double staircase, cantilevered out from the side walls: each side has 50 marble steps, about ten feet wide. The balustrades are decorated, each side, by four Muse statues, marble with lights on top. 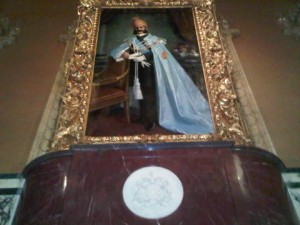 Looking up at a lifesize portrait of the 6th Nizam of Hyderabad, then the world's richest man

On the side walls are hung lithographs and old black and white photos of visitors past, including royal families from England, Germany and Russia.

At the top of the staircase is an imposing lifesize portrait of the 6th Nizam. Then the world’s richest man, he used what is now the $130-million Jacob diamond, owned by the Indian government, as a paperweight.