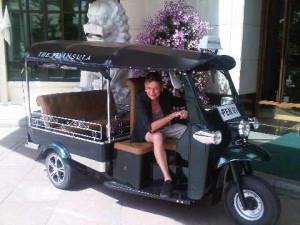 Soon after arriving in Bangkok...

She arrived!  The gal made it in one piece to Bangkok, and got straight into one of Thailand’s traditional public vehicles, the tuk-tuk.  You used to find them all over Asia – there was the time she was in a proper taxi in Delhi but it had no brakes, rolled around bends, in one case right into a parked truck carrying wood logs.

One log pierced the taxi’s windscreen, the crowds gathered more quickly than the clouds in a thunderstorm but she was able to make her escape by tuk-tuk, Indian version.  In Bangkok the tuk-tuks are quickly giving way, on the street, to bright-coloured – like day-glo – enclosed taxis.  Fuchsia is the prominent colour. 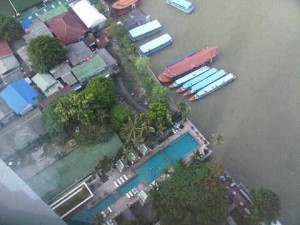 .. and view, down to the elongated pool, from room 3204 of The Peninsula

The Peninsula Bangkok is as superbly reliable as the others in this small and select group. Arrange to be met at the airport, and you are whisked through, after customs, and the BMW is miraculously waiting, and it has moist linen towels, and a choice of iced or room-temperature water, and wifi that works.

Oh how busy travellers appreciate that.  And here, at this 37-floor hotel, shaped like an open-W so that all rooms look down to the Chao Phraya river below, everyone appreciates the view.

This river is busy 24 hours a day, with long-boats and convoys of cargo boats going up and down, and ferries going back and forth.  At night, luridly-lit noisy tourists boats add to the throng. 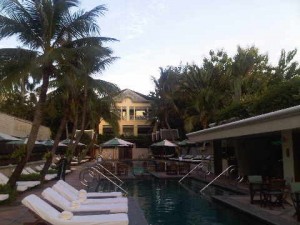 Down by the river, you can look back along the three connected pools to the spa house

From 3204, one of the angle suites, you can see far down to the hotel’s three connecting pools.  Down there, at pool level, you realise how clever of the designer, way back in the last century (well, 1999) to put in three pools.

There is a quite mystical view along the trio, away from the river.  At the far end an old Thai house has been turned into the ESPA.  Great idea to have at least a back massage after a long flight. 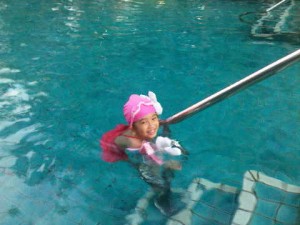 Kid in a pool with Miss Kitty life-saving armbands

Three pools also give the chance of escaping the kids who seem to love this hotel, and its pools.  They are actually really cute – loved a little Japanese girl with arm inflaters bearing heads of Hello Kitty.  She knew she looked good.  The pool attendants do too.  Their mushroom shorts are superbly cut, as are the paler shirts, above – and of course the towels are pale mushroom too. 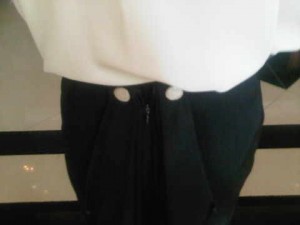 This is a hotel about detail. Look at the uniforms and you see style. One woman’s skirt has two buttons at the back, as if her skirt is buttoned to her shirt (of course it is not).

In the outdoor terrace of the River Café and Terrace, where we dined watching the evening’s boat activity, the crew wear chic bartender’s aprons, black with the RCAT initials on them.  And, as everywhere in Thailand, the women’s hair is immaculate, tied back in a variety of buns and ponytails. 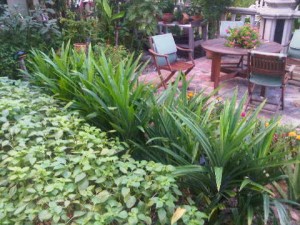 The chef's table is set among herbs, near the swimming pools

More detail.  Wander through the lovely garden – between the pool and the River Café and the hotel’s wharf, where the green-topped shuttle boats are constantly plying across the water – and you pass a table and chairs set in a herb garden.  That is exactly what it is.

There are occasional outdoor chef’s tables in Vancouver, on the 13th floor terrace of the historic Fairmont Vancouver, and near London, in the enormous greenhouse at Waldorf Astoria – Syon Park.  But this is here, year-round, for all to see, and sometimes to use. 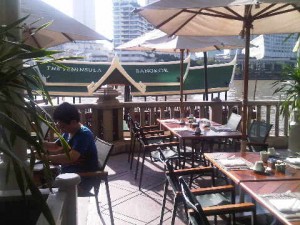 Breakfast outside, on the terrace, watching the fascinating river activity

I did not dine at the chef’s table this time (it would have been a bit public, with the 370-room luxury hotel full, with many family groups, from around Asia and also India).

Breakfasting outside, however, is a must (though the aforementioned Asians stand in line, in a neat cordoned-off queue, to await a table inside, in the air-conditioned room that houses a never-ending array of cold buffets).  There are also serving stations, full kitchens, that stand outside on the terrace. Luxury is giving everyone what they want. 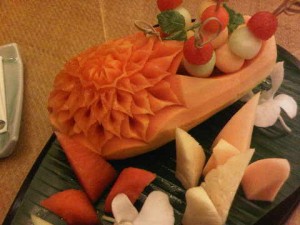 And luxury is also the calibre of fruit, and here The Peninsula gives you a little full-colour booklet describing all the different varieties.  Of course, being a nation known for its finesse, you can be quite sure that even a simple platter of fruit is going to be meticulously carved, into a shape or a word.

I know that I must not wai (a little bow of the head with my hands quickly together, as if in momentary prayer) until one of the servers has wai-ed me, and then I return the greeting, thanking for the fruit. 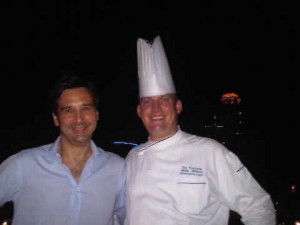 Etiquette is such that one must not cross one’s legs to allow the soles of feet or shoes to show, and one must avoid touching others’ heads, and apparently black is for mourning.  Too bad. That is my travel gear.

One must also have fun in Bangkok, which is what every visitor seems to do and that is why most return, some quite regularly.  As Nicolas Beliard, the French-American who runs this lovely hotel, and his German chef both confirm, yes, it is also fun living here.