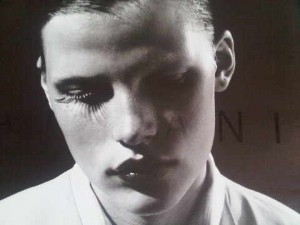 What is the ultimate in bedside reading?  One of the winners must surely be Giorgio Armani, a tome that is so heavy that if you dropped it while reading in bed at Armani Hotel Milano you might not merely sleep, you could well knock yourself out.

This happens to be Giorgio Armani by Germano Celant and Harold Koda with Susan Cross and Karole Vail, the souvenir catalogue from Giorgio Armani; A Retrospective, 2003, which opened at London’s Royal Academy on October 4th, 2003.  It is worth, says the gal, taking three minutes to watch YouTube. 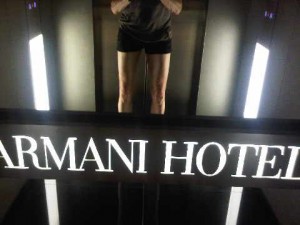 Elevator cabins remind you where you are...

So Armani, born in 1934 at Piacenza, near Milan, was dressed stylishly in mum’s made kit fashioned from parachute silk and military uniforms.  In 1966, architect and designer Sergio Galeotti persuaded him to start designing.

By 2012 he is into everything, including the all-purpose hand-held ‘concierge’ zapper in the 95 bedrooms in the luxury hotel that sits atop his Via Manzoni department store in Milan.

There is only the minimal signage outside the hotel but go through the heavy swing doors and you are in an immediate aura of his signature musk (incense-like) aroma. Take the elevator up to seventh floor reception and you know you are in the right place. 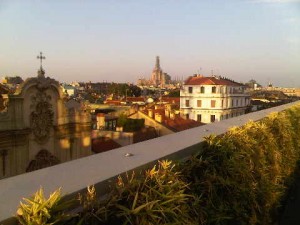 .. sensational view from the bamboo-lined terrace of 601

Rooms, confusingly, are back down – another elevator – on the second to sixth floors of the nine-floor building.  601 is one of two presidential suites, wrapped around in a four-foot wide wood deck, living bamboo lined.

Fortunately, Mr Armani likes bamboo. Look out across tiled rooftops to the Duomo, currently under wraps.  Look in, at a theatrical stage set that is coordinated to the Nth degree.

Floors are shiny black, or matt grey, marble, or soft grey carpets.  Grey-bronze is used for leather walls, seating and the bed’s day cover – and for open-weave ceiling-high net curtains (windows also have blinds). Other colour? The darkest of the bamboo greens is picked out for deep-pine shiny lacquer in the whole apartment. 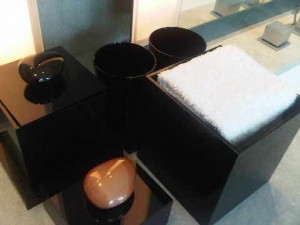 The bathroom set-up has colour, in the form of a salmon-hued soap pebble

And there is a soft salmon, in the form of the soap, from Armani Home, like everything it seems.  The soap is pebble-shaped, and matches the pebble top, black, of a black box in the bathroom set up.

Everything is set up exactly. The two washbasins have big mirrors over them but there is no magnifying mirror.  Mr Armani does not do magnifiers.  He does do very substantial coat hangers, grey-bronze, and for some reason 601 has two safes, one large enough to hold three copies of the Armani book, held vertically, and an ordinary Elsafe, which would take a fourth book. 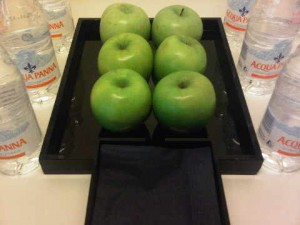 Exact alignment, apples and water in the gym

Does Giorgio live like this at Armani @ Home?   Does he, too, arrange supplies – in the personal gym that he must have to keep in such great shape – in exact order?

The gym here, not surprisingly, is the best, all-black Technogym. Along the vaguely-bamboo-patterned corridor, up there on the top floor (marked floor eight) is a vitality pool, about 12 by 12 feet, with towels held, exactly placed, on rails that look like Chinese temple gates.

The spa agent, who can offer MU relaxation, LIBERTA tension relief and FLUIDITA vitality restoration, has no chair.  Mr Armani does not do chairs for spa personnel, she has to stand, her computer on a waist-high shelf.  She, like all her colleagues, is clad in Armani, even to her shoes. 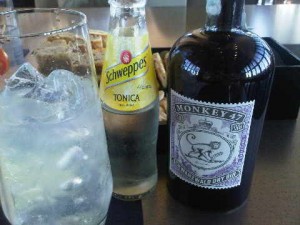 The non-Armani products, one must confess, are also the best: some telephones are Jacob Jensen, for instance.  Take the array of gins set against an onyx wall in the bar.

As well as all the usual brands, you can have a Monkey 47 gin and tonic.  47?  This is the number of ingredients used in the gin devised by a British soldier, Monty Collins, who after WWII helped renovate Berlin’s zoo and opened a guest house in the Black Forest called Zum wilden Affen, the Wild Monkey. 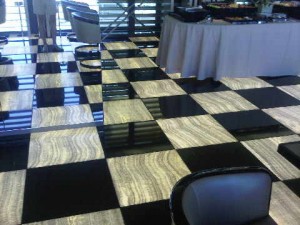 Walking along the restaurant gives a catwalk feel

Yes, it is now a year old, and day in, day out, servers and guests sashay down a 100-yard catwalk that is the length of the Ristorante. The floor is a checkerboard of black and back-lit onyx squares.

The board is deliberately set slightly askew but, in the centre of the room, there are 61 squares from one end to the other.   One long wall is all-mirror, with horizontal ‘shelves’ that electronically turn to keep out the sun. The other long wall is entirely mirrored, which gives amazing optical effects. 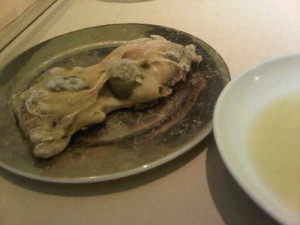 There are no visible service stations (Armani symmetry, stupid – servers ‘clear’ by using silver high-sided trays). The food has somehow managed to escape this geometry.  A fascinating olive-studded bread roll deserves exhibition space in the Royal Academy, a sliver of courgette with a Controfiletto di manzo piemontese actually dares to curve, rather than lie straight.

At dinner, the tables, flower-free, are set with golden, or plain white, porcelain, and onyx-coloured cloths that match not only flooring, and waist high onyx blocks separating some tables, but, on all tables, Kleenex-sized onyx boxes holding night lights. 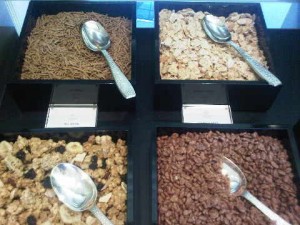 The waiters are in black, though some seem to have acquired white shirts, and at breakfast a beige apron managed to gain admission, as did bright yellow bananas and green kiwi slices, all set exact in black high-sided trays that match the black trays now used for ‘clearing’ (silver has been sent off-duty).

Colourful juices are kept out of sight, in big silver jugs.  Cereals are displayed because they are brown.  Lifestyle managers, led by Andreas Eberhart, a charming walker who actually wheeled the Porsche Rimowa as he escorted me here, constantly ask if all is well. 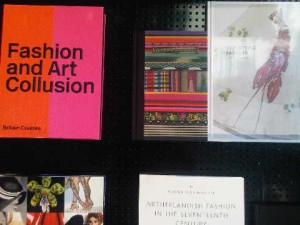 It certainly is.  I sleep like a log, and after a great shower, using Armani/Home all-purpose body and hair stuff, I even begin to smell a bit like the hotel, musk with incense and addictively alluring.

There is sadly no walker as I leave, taking the faithful Porsche Rimowa past two pink Armani handbags in a vitrine, down to ground level, round the corner, past Armani books – wow, colour – to my next appointment.