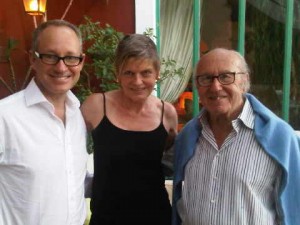 The former summer home of the Sersale family, from Naples, is now the leading luxury reason to head for Positano. Since 1951, they have run this cliff-set paradise, Le Sirenuse, as a hotel – and a magnet, it is, for the chattering classes of Surrey and Westchester.

There were four hotel siblings originally, Aldo, Anna, Franco and Paolo.  Now there is only Franco, a one-time top engineer working overseas, and his son, Antonio, who because of papa’s travelling was sent to the very-English boarding school that is Millfield (he speaks as an English, rather than as an Italian, aristocrat, says the gal). 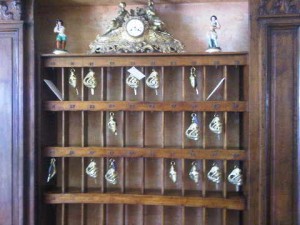 In a charming swingback to the past, room keys hang behind the check-in desk

Positano and Sirenuse and ‘Antonio’ trip off the tongue of the top Virtuoso and other travel agents – including increasingly in Brazil.  Their clients love it, despite the fact it does not have a private, or sandy, beach, which is a reason there are no Russians.

Sirenuse followers come back for such old-fashioned features as proper cubby-holes for proper keys behind the front desk. They know their favourite rooms, and their favourite staff members.

They know their day’s routine, which might include a couple of hours packed like sardines (Hédiard, of course) around the 40-ft pool, with jetwave, that has somehow been squeezed on to the largest of many terraces. Swim here and you are reminded a bit of Taj Lake Palace in Udaipur, or being on a top cruise ship.  Look out over the railings at blue sea far below. 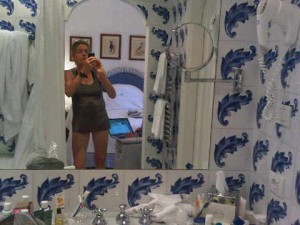 Room 11 is more or less lined in blue-painted tiles

Since the hotel, like everything in Positano, sticks like magic to vertiginous cliff faces, it heads down through seven floors, with floor five equating to the narrow one-way road outside.  Some of the 59 rooms are more equal to the view than others – room 11, on the lowest floor, compensates in some way by turning itself into an adult ‘fish tank’ because of its all-walls, all-floors of big white tiles with blue fish-like waves on them.

Room 11 is great for the ultra fit.  It is a mere 99 steps up to fifth floor reception, though of course elevators are not only available but used by nearly everyone.  Room 11 is also great for clubbers as it is nearest to the security entrance (press a button for all-night entry) from the gritty black beach and its rave clubs. 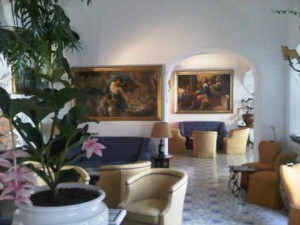 Public areas, lined with old portraits and other art, are like a family palace

The less fit can simply relax in this Leading hotel in a series of sensationally-elegant and palatial rooms, with old portraits and collections formed by Franco Sersale over the years. There are amazing interior displays of greenery, overseen by a cousin of Antonio’s – another cousin concocted the Sirenuse scent, and Antonio’s wife Carla runs three Emporio Sirenuse boutiques, one in the hotel’s lobby and the others directly across the road.  As Antonio says, the only reason to have two across the road was to stop a horrid fast food joint moving in. 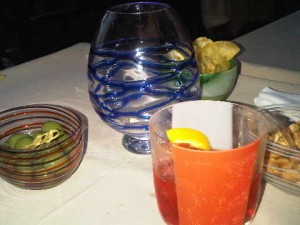 The Sirenuse’s La Sponda, which gained its Michelin star this year, is as far removed from ‘fast food’ junk as you can imagine.  Here, you eat magnificently.  The knowledgeable, having spent the day around that pool or admiring the palatial splendour of the whole, gather for cocktails in the Champagne Bar.

Like most luxury hotels on the Amalfi Coast, the Sirenuse closes November through to March.  Early and late in the season one might cocktail inside but the rest of the time you gather outside.

A Campari and soda comes in an utterly splendid glass, slightly oval in vertical section – as are clear glasses for other drinks, and all are Murano.  Of course.  Wonder whether, on the hotel’s sunset cruise, with complimentary champagne and snacks, they also have Murano? 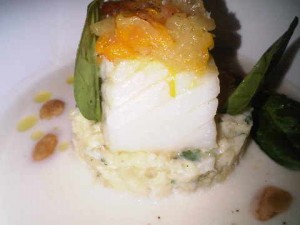 Dinner again is outside, under a canopy on the terrace near the pool, which fortunately closes at 1830 to prepare for the evening.  There are green napkins on white cloths, and masses of glasses – Riedel.

We drink Pinot Nero DOC Pigeno, Stroblhof 2009, from Alto Adige and look at chef Matteo Temperini‘s menu. It would have been impossible to do justice to his tasting menu but he adds tasters, just the same. A bite-size of octopus terrine, a surprise, precedes the ordered Linguine di Gragnano con vongole veraci, pesto di zucchine al limone, namely a mound of Gragnano linguine with baby clams.

I go on to Merluzzo mezzo sale al caviale di agrumi con yogurt di bufala e mandorle fresche, which sounds so much better than cod with citrus caviar, buffalo yoghurt and almond.  A green salad, with no dressing, goes perfectly. 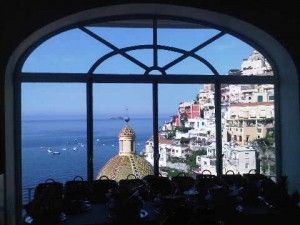 View from the breakfast food stations – to Positano’s vertical facet

Stay here much longer, girl, and you could get buffalo mania.  Breakfast, with buffalo yoghurt, is back on the terrace, with the food stations set up inside – though you still get a tremendous view of the Cubist-art that is Positano, the vertical town in extreme.

We sit and plan our day.  The hotel’s offerings, in a welcome booklet that also has a very good local map and details of local sights, includes a two-hour hike up over 1,700 steps to a nearby (?) village, Nocelle. Perhaps after breakfast that is not such a good idea.

Perhaps it is a better idea merely to explore the town, about which John Steinbeck wrote so brilliantly in Harper’s Bazaar in May 1953. One of his guides was a Signor Bassani Bassano, whose business card promised ‘all Italy – throt Europe’, whatever that means… 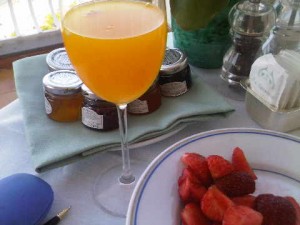 Literary musings lead to vitamin intake for the brain. The juice here is so fresh it still has pips in it. The butter is hand-rolled, on the kind of serrated wooden pats my mother used to use.

The jams are Tiptree, from the century-old collective in eastern England that supplies all of British Airways’ marmalades. There are fruits galore, whole and cut, and strawberry-topped flans for the Italian palate. 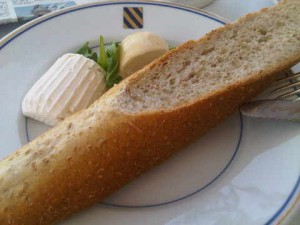 Simply, and the best, wholewheat baguette with ricotta, left, and smoked buffalo mozzarella

The smoked salmon and swordfish, I am told, are perfection.  Personally I head for the local cheeses, ricotta and unsmoked, and smoked, mozzarella. Gosh they go well with the diagonal-cut halves of white or wholemeal baguette.

This is great food, gal, just right to feed the mind, and the calf muscles, before a trip to discover what Positano is about, including its famed shopping…..