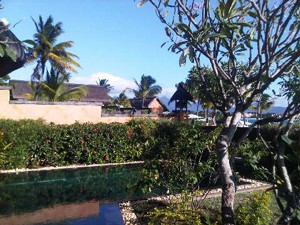 Thai architect Lech Bunnag has always been one of the gal’s favourite designers, and what he has done at The Oberoi Mauritius is sheer magic – again. Wherever he works, he gets the karma, or feng shui or whatever you want to call it, right.

At the risk of upsetting a few, his Trident Gurgaon remains the most beautiful hotel in the entire Delhi area (there are others that are more striking, and/or make a grander statement).

Arrive at Delhi’s Indira Gandhi International airport, sometimes at a horrendous nocturnal hour, realise once again that the city’s 24/7 traffic is like a nonstop chaos of ants viewed through a grey gauze, and stress level rises immediately.

Turn into the Trident’s arrival yard, walk through the clean-cut stone entrance and spy the football field-sized decorative pond, with lit flares at night… go through the tall-tall lobby, clean-cut and calm, and to your room (where another, smaller, decorative pond comes right up to the outside of your window sill).  Stress has gone. Calm is restored. 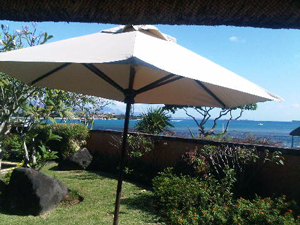 The same thing happens at Oberoi’s 12-year old resort on the upper west cost of Mauritius.  After an hour’s somewhat bumpy, though pollution-free, ride in the hotel’s stretch BMW from the airport, you turn into a 20-foot turning circle surrounded by frangipane trees, hibiscus and lots of greenery that is so clean it looks as if it has been sprayed.

You are offered a cold towel by someone in a knee-length kurti coat, and escorted up eight pagoda-type stairs to a small raised platform, a symbolic arrival stage.

Bliss.  No need to be buggied, here.  The Porsche Rimowa and its owner are walked along a saffron-coloured concrete path that winds, flanked by greenery and the occasional saffron-coloured stone statue, in and around eight-foot wooden double doors that are gateways to one of the 76 villas.  205, only five minutes’ walk from the pagoda stairs, is right next to the ocean (only a hotel pathway and a bit of grass separates you from water – and we know Bunnag loves water). 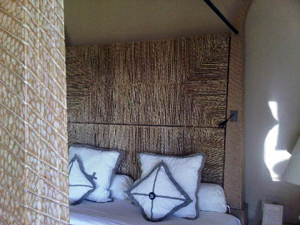 Go in through 205’s double doors and there are ten black-stone, cartwheel-sized stepping stones set into the grass.  Hop, skip or jump past your own private water – namely your 30-foot pool – to the double glass doors that allow you into your temporary home (the doors are set into the all-glass front wall of the villa).

Inside, the interior designer, HP Lim from Singapore, has managed to do without colour.  It is palest magnolia, throughout, inside, from walls to cathedral-type wood ceiling, to four-post bed frame.

The bedhead is simply woven twine. And, being Oberoi, the light switches are easily seen, simply worked.  You have all the mod cons you might need, plus the fastest – free – WiFi on the island (it is campus-wide). 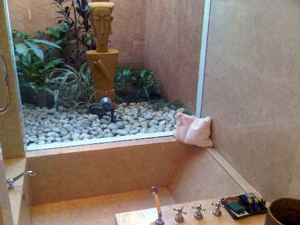 Finish the recovery-from-the-flight with a swim (the wood fence behind your greenery is high enough to mean no togs, not even Liz Hurley designer swimwear, are necessary).  Down seven steps into the water, swim one end to the other, to the end where two giant tree trunks, bound midshipman style in really thick rope, rise majestically.

These are two of the supports for your outdoor sala – when most visitors stay over a week they want to dine home, and you cannot blame them.  Lech Bunnag’s magic includes getting proportions and ergonomics right.  Back inside the villa you look through the bathroom’s all-glass wall into a small garden that says ‘I am here’, complementing rather than competing with the simplicity of the interior. 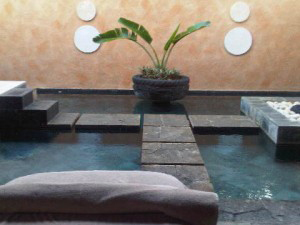 Take the coast path left outside villa 205 and you wind between beach and jetty, on your right, and the hotel’s main pool, a dark royal blue beauty, on your left.  This has different heights of waterfall, and statues, and reminds me of Rajvilas, Jaipur (one of P.R.S. Biki Oberoi’s beloved ‘vilas’ boutique hotels, wonder why he did not call this hotel Maurivilas?

It fits the vilas mould as seen not only in Jaipur but Agra and Udaipur too).  Yes, there are certain features that embody Bunnag, as, in Thailand, at Four Seasons Bangkok, Four Seasons Chiang Mai, Hôtel de la Paix Cha Am Beach Hua Hin, and Phulay Bay, a Ritz-Carlton Reserve – and in Malaysia, at Four Seasons Langkawi and at YTL‘s Pangkor Laut. 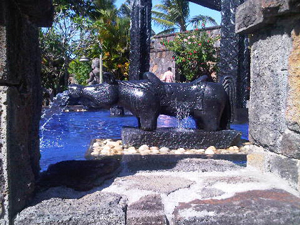 Some architects are the dominant factor when it comes to design – think Norman Foster’s curlicue additions to both the Capella Singapore and the Dolder Grand, high above Zurich, or think, come to it, of I.M. Pei and Four Seasons New York. In the case of Lech Bunnag, his architecture blends so perfectly with a luxury hotel’s interiors, and its gardens (here, Bill Bensley).

Of course in the case of the charming Mr Pei, whom I had the great honour of sitting next to when he was at ease, sitting in the main lobby of the hotel, looking around him and contemplating – in the case of that hotel, there are not exactly any gardens around anyway.