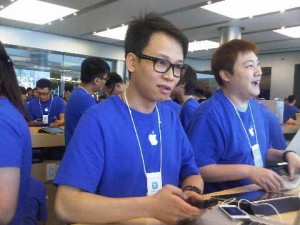 This is the first part of the story of the basics of life.  Let us begin with apples and cheese, staples around the world.  Say the word ‘apple’ to creators and they will say Apple, meaning only one thing. For the gal, the Apple Store at IFC on Hong Kong Island is manna from heaven, EPO to Lance Armstrong, mother’s milk, whatever you cannot do without.

The two Apple Stores in Hong Kong, the IFC one and one on the mainland in the mall connected to both Ritz-Carlton Hong Kong and W Hongkong, are between them the best in the world.  They have no fewer than a thousand Geniuses in total.  It does not matter who you get, nothing is too much trouble. 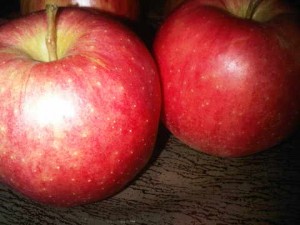 An apple a day keeps the doctor away

Anyway, Edward and his supervisor sorted out my beloved MacBook Pro (love the diagnostics, you can see on the screen how every organ in its body is currently working, and its potential – wish they could do the same for me).

Then I made my way up to The Conrad Hong Kong, and heard about the luxury hotel’s party for all Hilton bigwigs and lots of other VIPs, and Thomas Hoeborn told me about the apple dinner he did in Bangkok, when he was running the Millennium Hilton.

He did eight courses, all paired with wines, from apple carpaccio through to an apple soufflé with Ch d’Yquem.  It was held in what is now the Cheese Room at the Bangkok hotel. 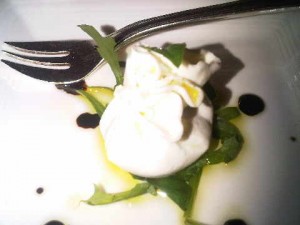 Now he is in charge of the Conrad here and he does not have a cheese room – yet.  Watch this space, I say.  What he does have is an Italian chef, the filmstar-look Alex Bignotti, who even makes his own burrata.  Wow what a challenge.

Burrata, which means ‘buttered’, is solid mozzarella wrapped around an inside of cream and mozzarella. I find a recipe and decide, like shucking oysters, it is better to let someone else do the work.

Bignotti sent out little Bignotti-made burrata for us to try, in the hotel’s Nicholini’s restaurant.  Take a mouthful as you watch the nightly laser show across on the mainland. 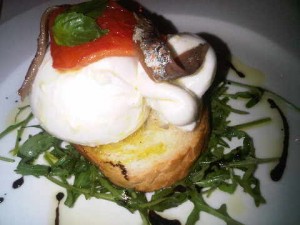 Take a sip of Antinori Tignanello 2008, a Sangiovese from the Antinori family’s 120-acre Tignanello estate.  I think back to our overnight at Castello Della Sala, their 14th century home northwest of Orvieto. An old retainer ran the whole show as far as the house was concerned.

She cooked dinner, tomato salad, home-made pasta, chicken, home-made icecream.  The following morning, as we left for a vineyard tour, she was running round the yard chasing one of the hens who would be tonight’s dinner, for tonight’s guests.  She probably also had time to make burrata, and bread.. 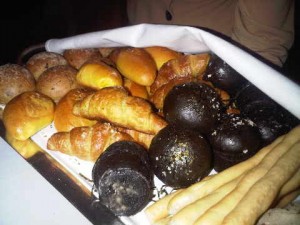 This night, however, dinner-proper started with the burrata on the printed menu, served with salted anchovies, toast and extra virgin olive oil.   The oil on the table is Laudemio, owned by Frescobaldi, and again the memory starts up (look FORWARD not back, please).

It was the launch of Luce, the joint venture wine between the Frescobaldis (making wine since the 14th century) and the Mondavis (fourth generation).  Some of Bob Mondavi’s wine distributors got a little noisy, singing happy birthday to him rather loudly.  One of the more senior Frescobaldi ladies, with a long-long title and the epitomal Roman noise, looked down the latter and said ‘how extraordinary’. 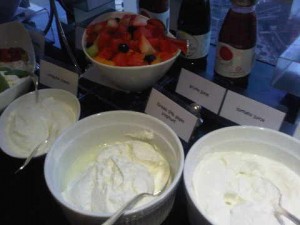 So the Laudemio goes with the yummy breads, and the meal goes on to spaghetti alla chitarra, with bottarga (air-dried mullet roe) and sea urchin and pine nuts.  And I go to bed, and too soon am up again to celebrate another beautiful day in Hong Kong.

And there, in the 57th floor Club Lounge, I am greeted by the best Greek yoghurt since the Total I eat back home.   Frankly, there are only three kinds of yoghurt worth having.  Total or other Greek.  Ferme des Peupliers full-fat, as at InterContinental Hong Kong.  And home-made, as at Copacabana Palace in Rio de Janeiro. 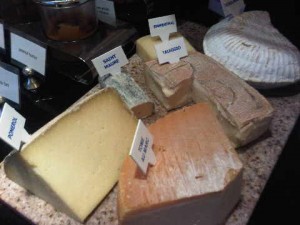 What is extraordinary here, however, is the cheese table.  This wins a prize for breakfast cheeses outside of Italy, where at many of the top hotels you get a variety of ricottas, plus mozzarellas and of course burratas.

Here, there are giant slabs, all carefully labelled, of Emmenthal, Pomerol, Saint Maure, Taleggio, Tickelmore and Tome au Marc.  I know Thomas Hoeborn likes cheese (think of his Cheese Room in Bangkok)…  There are no phoney cheeses here.  No, we optimistically think of real cheese.

It was Pulitzer Prize-winning writer George F. Will who famously says ‘Pessimism is as American as frozen apple pie with a slice of processed cheese’, but at the same time he wrote in the San Jose Mercury News a couple of days ago that it is inexplicable and regrettable that Romney has so far flinched from a forthright endorsement of breaking up the biggest banks. 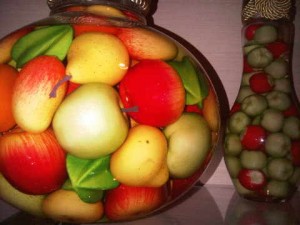 .. and, day and evening long, displays of pickles, including apples

One of Romney’s Super-PAC supporters is Julian Robertson, the founder of the Tiger Fund and said by Forbes to be worth $2.6 billion (much less than it used to be).  He is part of the Buffet-Gates Just Giving pledge.

Robertson is taking a small party, soon, to visit his three resorts in New Zealand, Cape Kidnappers, Kauri Cliffs and Matakauri Lodge.  I have only been to Kauri Cliffs and I remember the ambience, and the wines, and the food, pure and healthy, just like apples and cheese.

Back to the present.  I look up, in the Club lounge here at Conrad Hong Kong, at displays of pickled vegetables and fruit – including apples.