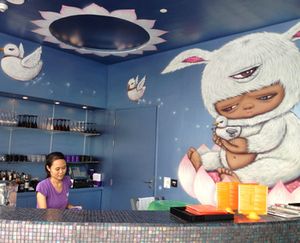 From one of Bangkok’s new-wave fun luxury hotels to another, look at this whimsical mural behind the pool bar at W Bangkok – it is by American graffiti artist Alec Monopoly, who uses as a family name the ‘Monopoly man’ he often incorporates into his work (it is impossible, says the gal, to find anything out about this guy, though he does admit to being influenced by his UK counterpart Banksy). Interestingly, this very-sleek 407-room hotel is owned by two very-traditional entities, Istithmar out of Dubai and TCC, from Bangkok – their properties include the Plaza-Athenées here in Bangkok and in New York. 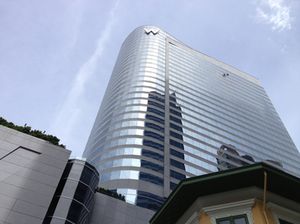 This hotel, which opened December 2012, has a new 31-floor tower that soars up beside, but not connected to, the 1896 palace of Lord Sathorn, after whom the busy main road in front of the hotel is named. The palace became the Royal Hotel and the Embassy of the USSR.  Soon it will re-open as a function space for the hotel, with four additional duplex suites.  Gosh, W Hotels are certainly going upmarket after their beginnings: I remember staying at both the Doral and Tuscany in New York when Barry Sternlicht was turning them into the first W Hotels, with planks for desks and windowboxes of living wheat grass and little watering cans so you could water it 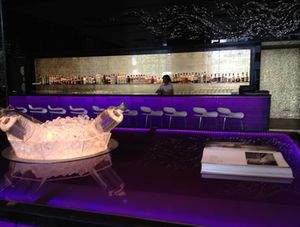 The lounge bar, by night…

A lot of people in this part of Bangkok come in to hang out in the ground floor (main tower) lobby lounge, which evolves from coffee + laptop (or tablet) during the day to drink + conversation by night. On a Wednesday, there will be lots of elegant women here as it is Girls Night Out, with the first glass of sparkling free (on Fridays, Wine O’Clock attracts both sexes, as do the I’m Single promotions on the first Saturday of every month). Deep purple is a theme colour here, together with a lot of glitter.  One wall of this huge lobby has glitter patterns on a sleek black background, all designed by Stephen O’Dell, an American who works as SODA, from his initials. The lobby also holds, today, a temporary exhibition of eyeglasses and, everyday, the desk where the Insiders sit. 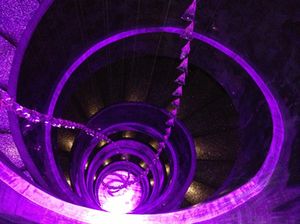 ..and looking down the main stairwell

These Insiders are concierges plus personal assistants plus Jill Fridays and they are brilliant.  Whatever it is you want or need, they seem to be able to oblige, and it is they who put little gifts, with personal notes, in your room. Circular stairs lead up from the lobby, first 36 steps to the second floor restaurant and on up to meetings, and a 30-foot (high) ballroom with 12 enormous red lampshades that remind me of the ones Adam Tihany put into the sorely-missed ONE CPS at The Plaza, which is where I first met up with luxury hotel marketer Philippe Kjellgren (who launches Hotel Insider soon but shhh, that is still supposed to be a secret).  I love the delicate sculpture that hangs down through this entire staircase. 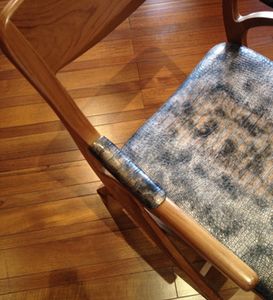 Chair in The Kitchen Table

Back to the restaurant, The Kitchen Table, for dinner. There are lots of areas but we deliberately sit near the open kitchen as it is always such fun to see the chefs at work.  I study the drinks menu, with its section of Iconic G&Ts – Hendrick’s is offered with either the customary cucumber, here with rosemary, or with guava and celery – and a list of Woohitos, say the El Classico, with chopped limes, lime juice, sugar, mint and soda water (later I find Insider Nikki has put a Woohito-making kit, with recipe, in my room, together with a bright yellow box of rainbow-coloured macaroons). I admire the chairs here, with their satin-smooth rounded wood forms and alligator-look leather seats and arm pads. 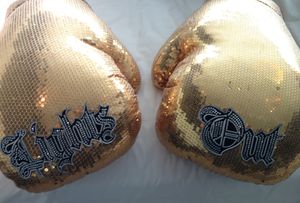 It has, as always, been a fascinating day in this delightfully endless journey through luxury hotels. I am ready for bed.  Up in the sleek-and-silver suite 3106, I go to say goodnight to the three-foot (long) silver metal leopard sitting on the tall counter in my sit-up (four chair) bar, and head through the salon to the bedroom. There I find a pair of 15-inch long cushions, shaped like boxing gloves covered in golden sequins.  One glove says Lights, the other says Out.  I call it a day.