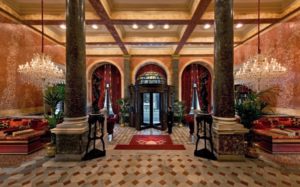 Pera Palace Hotel Jumeirah, Istanbul, hosts another Black Week festival, November 16–18, 2017.  It will be themed for James Bond in honour of Ian Fleming, who stayed at the hotel in 1955. Special guests this year include best-selling British crime writer and James Bond continuation novelist, Anthony Horowitz; British actor and author of the Young Bond series, Charlie Higson, and Turkey’s very own detective and mystery writer, Ahmet Umit.

Under its creative GM Pinar Kartal Timer, this 145-room  luxury hotel is continually offering concerts and play readings – and at all times it is full of history. It was built in 1892 by the Belgian, Georges Nagelmachers, who set up Compagnie Internationale des Wagon Lits. Room #101 is a fascinating Kemal Atatürk museum, and some suites  are themed for famous past guests, including such other literary greats as  Agatha Christie – who allegedly wrote Murder on the Orient Express in what is now room #401 – Ernest Hemingway, and Alfred Hitchcock.