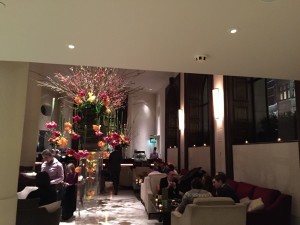 The lobby is a meeting place day, evening and night-long

There is so much going on at One Aldwych London. This luxury hotel‘s lobby is abuzz from morning on: despite growing competition around this is where so many local business people choose to meet, for coffee or drinks. Add in happy families attracted by the unique afternoon tea, themed for Roald Dahl’s Charlie and the Chocolate Factory. You can see little darlings‘ happy faces as they are brought home-spun candy floss, and chocolate eggs, and cheesecake, and small bottles of chocolate caramel milk (mummy and daddy and nanny and granny can be placated with flutes of perfectly chilled Lallier Champagne, brought by stylish servers in lavender and grey who always seem to smile, says the gal). This must be one of the best children’s afternoon teas in the world. 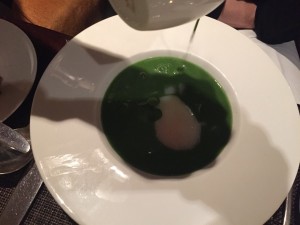 Soup is poured over a lightly-poached egg

I was excited, too. I was about to experience the hotel‘s unique Indigo menu, which ran for four months without anyone realising it was entirely gluten-free and dairy-free. The effect is such that in January 2016 a whopping 544 extra lunches and dinners were served over the January 2015 count. I was with my friends Sophie Campbell, who does bespoke London walks for the hotel, and Howard Rombough, a former journalist who is now the creative genius here. Before you wonder whether Indigo is also low-calorie, let me say straight away that chef Dominic Teague’s menu is not only delicious but absolutely satisfying. The bread of the day, individual loaves – more cakes than bread, actually – of buckwheat flour with onion and samphire, was so addictive, with crispy outer crust, that I could have eaten that alone, though I would have preferred olive oil to the rape oil that comes instead of butter. 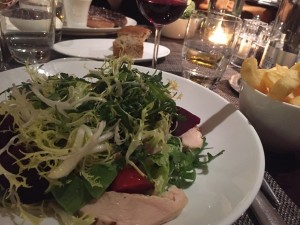 Create your own salad, as starter or main

Sophie had a poached egg over which a healthy green soup was poured. I started with cured Loch Duart salmon, and went on to make-your-own salad. There were five choices of protein, choose three additions, and one of four dressings. I had a big plate of leaves, corn-fed chicken breast, avocado, beetroot and tomatoes, with truffle dressing. Add a side of a big bowl of enormous light-as-air crispy fries, and you see what I mean about not being starved. As if to finish on the proverbial high note, we shared a berry pavlova. The hotel is surrounded by theatre-land: The Lion King is directly opposite and it is only seven minutes’ walk to The Royal Opera House. But, said Howard, why not stay and see it here? The hotel‘s 30-seat cinema screening-theatre has real-time live performances, and it offers a range of dine+watch suggestions. It also screens Royal Shakespeare Company productions, and old movies – Breakfast at Tiffany’s is always a sell-out. 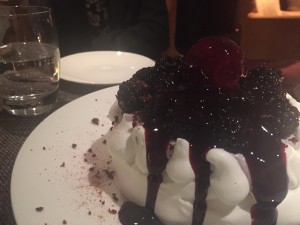 The pavlova must not be missed

Steve Jobs sat at the next table to me in Indigo, once. Philippines blogging sensation Bryan Boy had been here recently and I would love to know if he had taken any of Sophie Campbell’s bespoke walking tours, perhaps around the adjacent Covent Garden area. I asked her what ‘walks’ she would recommend for teenagers. She takes them first up the 259 steps inside the dome of St Paul’s Cathedral to its Whispering Gallery, then a boat ride along the Thames to the O2, then a ride on the Emirates cable car. Howard said how much he personally likes East London’s three-mile Line sculpture walk, and mentioned the hotel’s partnership with Rizzoli books. Bed time. In the morning I headed down to the 24/7 Technogym – oh so well appointed (see the entrance, at the top of this story). Afterwards I breakfasted back in Indigo, which serves ‘normal’ food, including dairy, at that hour – both the yoghurt and omelette were first class. I looked over the balcony at the lobby, now empty, apart from the florist. See the video, below.